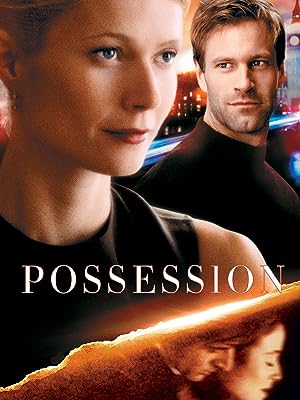 (539)1 h 42 min2002X-RayPG-13
HD. Two academics in London connect after discovering a series of love letters between the two poets they are researching.

LaurenReviewed in the United States on July 15, 2017
2.0 out of 5 stars
Less than the book, but much more clear.
Verified purchase
I watched Possession after reading the book. I watched it in order to better understand the novel, which is rather complex and long. After reading the book I felt as if I had been immersed in the world of academia research, after watching the movie I felt like I watched a chick flick.The mystery that is set up by the author in the 1900 love story is much more mysterious in the book. There is no mystery in the movie. The audience is handed the answers before the questions. The book's wealth is found in the character's contemplation about life's meaning, whereas the movie takes this out and replaces it with the protagonists having a whiney discussion about why life is unfair. In the book, the protagonists are in love with their research and they slowly fall in love with one another, in the movie the immediately fall in love and their passions for their subjects.

The story follows two parallel love stories one set around 1900 and the other around 1980, both set around Britain.

I don't mind the female protagonist, but the male protagonist does not fit his part. He is not a believable academic. Here, he is played as a know nothing American--kind of a Matthew Mcconaughey.

David HumeReviewed in the United States on November 16, 2020
5.0 out of 5 stars
Superior Film
Verified purchase
"Possession" was an superior film! As an old, retired academic myself, I was particularly gratified to see the old fashioned, pre-computer way of doing literary research. (A lot of reading and scribbling on lots of note cards!!! It reminded me of my lost youth! ) (; Gwyneth Paltrow was her usual outstanding self, and Jennifer Ehle was also outstanding. She really conveyed an air of mystery which I found very appealing. Jeremy Northam and Aaron Eckhart were excellent in their roles also. The two different time levels were linked together beautifully. Highly recommended!!!
2 people found this helpful

Emily TomsReviewed in the United States on February 2, 2019
5.0 out of 5 stars
Great historical drama with great actors and actresses!
Verified purchase
I love this movie! I saw this a while ago for the first time, and it wasn't a well known movie, but it has some great stars in it.
The story is about a well known writer that had a secret love affair and these two people 'historians' finding out the truth about the affair by digging around places in England for evidence. It's very intriguing, especially as it goes back and forth between the past and the present.
Thanks for a great movie!
And the seller was great, it was used but not broken, the case and disc were fine, and I had no problems with shipping.
3 people found this helpful

Ann T.Reviewed in the United States on June 14, 2021
5.0 out of 5 stars
Great story!
Verified purchase
This is one of those movies I watch over and over and still love. Jennifer Ehle, who starred in Pride and Prejudice, is wonderful, as is Jeremy Northam. Aaron Eckhart is likeable and fits well for the role. I like Gwyneth Paltrow, but her voice and accent take getting used to. It's a great story, especially if you love literature and poetry.

Ms WinstonReviewed in the United States on March 21, 2003
3.0 out of 5 stars
A Nice way to Spend an Evening
Verified purchase
I enjoyed this DVD, even though the story line was no where near as complex as the A.S. Byatt novel from which it was adapted -- and I think I was not disappointed because I knew that would be the case. Another reviewer said that the portions set in the 19th century were the best parts, and I agree. Jeremy Northam and Jennifer Ehle are outstanding as the lovers who will only be allowed a brief time together. Ms. Ehle is a wonderfully talented actress (as far as I am concerned, she is the definitive Elizabeth Bennett)with a face that accurately registers emotions so that the viewer is never in doubt as to what the character is feeling or thinking. Jeremy Northam is excellent -- it was his skill as an actor that kept the final scene in the movie from being maudlin. I thought Gwyneth Paltrow did an adequate job in the role of Maud, as it was written for the screen. However, Aaron Eckhart was a poor choice for Paltrow's romantic interest and fellow-academic. I didn't for one minute believe he was a student of 19th century British literature; I thought at first I was being influened by his performance as the biker-lover in "Erin Brockovitch," but the truth is that he just wasn't convincing and seemed uncomfortable in the role. The British countryside was lovely, the story is interesting and romantic, and due to Northam and Ehle I recommend this DVD as a nice way to spend the evening. If you want more depth, buy the book.
7 people found this helpful

Maui MikeReviewed in the United States on October 26, 2016
5.0 out of 5 stars
A surprisingly good mystery-historical romance
Verified purchase
This is one of Paltrow's best performances. The well-crafted and moderately complex plot is interesting, moves smoothly along and concludes with a satisfying conclusion. The back-and-forth shifts from present to distant past are handled well. Great cinematography; shot on-location in England and Wales. The casting was quite good (Paltrow and her leading man were the only Yanks cast), with some good performances by well-known English actors and a couple of very talented unknowns. I rented this on Netflix and bought it immediately... something I don't do unless I REALLY like a movie.

SarahReviewed in the United States on November 23, 2018
1.0 out of 5 stars
Bad film!
Verified purchase
Worst movie ever! I could not even finish it! I loved the book and thought I could handle the movie, but it really is so bad, the acting (ugh Paltrow’s accent is awful) and we’ll everything. Rented The English Patient instead and was so much happier.
One person found this helpful

chef10013Reviewed in the United States on December 30, 2016
5.0 out of 5 stars
Combination romance & mystery
Verified purchase
This is a wonderful movie--part romance, part detective story & thorough engrossing from beginning to end. There are 2 parallel tales being told here which, in spite of the really good work of Gweneth Paltrow & Aaron Eckhart as the contemporary couple, get overshadowed by the mysterious couple from the past, played terrifically by Jennifer Ehle & Jeremy Northam. Probably not for those who do not like English TV.
One person found this helpful
See all reviews
Back to top
Get to Know Us
Make Money with Us
Amazon Payment Products
Let Us Help You
EnglishChoose a language for shopping. United StatesChoose a country/region for shopping.
© 1996-2021, Amazon.com, Inc. or its affiliates