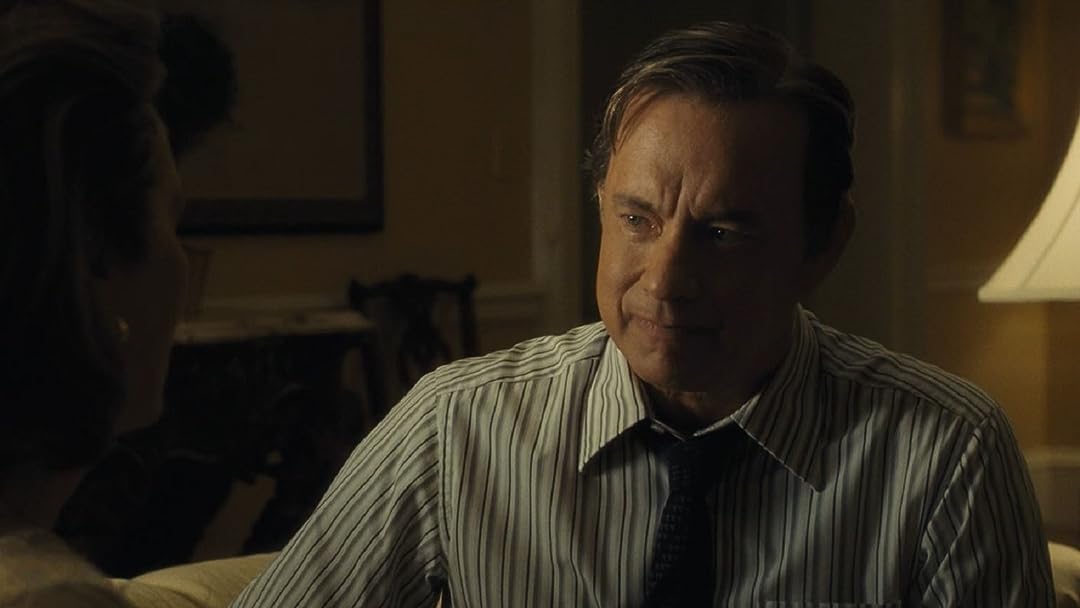 (5,455)
7.21 h 55 min2017X-RayPG-13
HD. Meryl Streep and Tom Hanks star in this drama that details how Washington Post staffers risked everything to publish the Pentagon Papers.

S. HamiltonReviewed in the United States on October 27, 2018
5.0 out of 5 stars
Loved this story!
Verified purchase
Well it’s Stars my favorite actors but more than that being of a certain age I definitely remember the Watergate Scandal and reading afterward what courage it had taken for Katherine Graham to assume her position as the owner of the Washinton Post after her husband’s suicide even though her father had originally owned the Post and she had every right. 1971 was a time when the glass ceiling was about ankle high and the thought of women even having credit in their name was fraught. I remember going into a bank to deliver the loan paperwork on the house my husband and I were buying. I went in with two young children, signed loan documents that we more than qualified for I thought I was just running one more errand that day when the Bank Manager he would not take them without my husband being there. Why? Because I was a woman and my husband might not know what I was doing, it was an expensive house! I explained my husband was at work (he was working @ 120hrs a week when he first opened his practice)
So the bank manager said, “What would happen if I called Your Husband?” He’d tell you to take the papers! So I called his office, asked to speak to him and when he came to the phone I explained that I was at the bank and the manager wouldn’t take the loan docs from me! God Bless my husband, he couldn’t believe it! So when the manager got on the line he told him to take the damn paperwork that I handled all our finances and to do anything else I ever asked him to do regarding our finances or he’d pull every account we had and the hospitals and medical center and do his best to make sure he either got over his chauvinist attitude or be fired! Can only imagine the opposition Katherine Graham faced, the risk financially, socially and possibly legally if they got it wrong! So not without trepidation but with great patriotism she took it! She was my hero I’ve been a fan of the Washington Post ever since!
She was trying to do this after suffering through the emotional stress of her husband who suffered from bi-polar disorder has committed suicide so it was a story for women’s liberation too.

Jeff MillsReviewed in the United States on April 27, 2018
5.0 out of 5 stars
One of the best movies I have seen
Verified purchase
One of the best movies I have seen, for awhile. I watched it 2 nights in a row, and enjoyed as much the 2nd watch.
I must say, I am 66 years old, and remember the "Pentagon Papers" release, when it happened; this movie filled in
many details that I did not catch on the 1st run. This movie goes down with "All the Presidents Men" as one of the best.
And at the very end of this movie there is about a 30 second reference to the Watergate brake in; that brought Nixon down.

artgirlReviewed in the United States on April 22, 2018
5.0 out of 5 stars
A powerful film about the search for truth...and justice...perfect for these times
Verified purchase
Simply great score that added to the suspense in a profound way. Having lived through the actual events, I thought that the path to the crescendo was superbly presented, with all of the compelling twists and turns along the way often leaving me breathless. There's no denying that the relevancy to today's times makes the film especially important. It is the dedicated and focused reporters and journalists who are going to get us our country back...and their courage and quest for the truth...even in the face of powerful forces trying to stop them...is really all we have standing between us and fascism.
59 people found this helpful

Russell SReviewed in the United States on June 10, 2018
5.0 out of 5 stars
This frightened me that this happened and is still happening?
Verified purchase
A cover-up that spanned four U.S. Presidents pushed the country's first female newspaper publisher and a hard-driving editor to join an unprecedented battle between journalist and government. Let me tell you that this movie infuriated me. Not due to the movie but due to the government cover ups and the lies andf the secrets. These are officials that work for us, the people, and they in my opinion have no right to keep things form We the People. I am furious that this still goes on too. So there is my political statement and now to the movie. Spielberg, Hanks, Streep what more is there to say. The acting is top notch and the story is well, the story. It should shake everybody to the core that this is what happened and is still going on. I loved the whole 1970's motif. All of this movie is one great film and should have gotten more appeal to the masses. This movie is a wake up call to us all and God help us if we don't .
23 people found this helpful

kbReviewed in the United States on April 22, 2018
5.0 out of 5 stars
How to undermine truths to the public- How media can be manipulated by governing powers
Verified purchase
Having just watched this docu-drama and taking notes, I was amazed at how history and it's 'circle' just keeps going around and around. We're supposed to learn from our mistakes through history as should the politicos, White House and media. Some say this was 'boring' but if you lived through those times it was just the beginning of a much larger and more dangerous picture. Just look at us now and the media and what it can and has done to divide our country via the politicians who have/had someone in their back pockets to make things happen. The print is a mighty sword and can be constructive as well as destructive. Watch the Speilberg version of the Post and the NY Times and draw your own conclusions. SO much more that I wish they had at least hinted at but the last short quote in the movie might get you to your history books and google searches. See where we're heading and what's already happened. Again. Good work to all of those who participated in this. NOT boring at all
58 people found this helpful

SusieReviewed in the United States on September 7, 2020
4.0 out of 5 stars
Kay Graham, touchstone.
Verified purchase
This film was the most moving for me during a sequence of scenes that begin with the unassuming summation of what's at stake for Kay Graham by another perceptive, if peripheral, woman in the film. And in the scenes right after Graham makes her critical call, you watch the events spool down the chain of command as the ungainly machinery of an early-1970s press produces a newspaper. Having worked in the newsroom at the end of the nineties, I was present when the physical cutting and pasting of the paper gave way to a fully-digitized layout. I also remember a male colleague inadvertently betraying that he was being paid seven grand more a year for doing the same job I did.

Kay Graham was given the helm of the Washington Post as a 45-year-old woman who had never held a job. One who believed it was perfectly natural for her father to leave the paper in the hands of her husband. It was only after her father and husband were no longer in authority that she took over. Streep's portrayal was very sympathetic for me. And the moments in which she was thrust into the crucible of a choice with staggering, unimaginable stakes are the ones in which her mettle was proved. By the time she stood by her call in the face of even greater stakes, I was silently weeping at the recognition that evil does not always triumph. That character can, in fact, stand the atomic blast of intimidation while taking responsibility for the welfare of others in situations that dwarf the individual and the treasured associations they seek to protect.

Watching the story of these ordinary people in extraordinary circumstances, I'm inspired to recognize there are calls to integrity which will always trump lesser, though proper, loyalties. There are hierarchies of rightness and paying allegiance to the highest of them is a proving ground for character. So that in those moments, you know yourself. And then you learn, in the aftermath, what good is truly capable of accomplishing in the face of unspeakable, organized, generations-long evils. Watching a woman rise to the occasion and spark a chain reaction of courageous service to the governed, and not the government, was a pinnacle experience.
2 people found this helpful

MargaretNCReviewed in the United States on June 23, 2018
5.0 out of 5 stars
Remarkable portrayal of a brave female leader who didn't expect to lead
Verified purchase
This remarkable movie is a treat to watch, especially because of Meryl Streep’s sensitive portrayal of Washington Post publisher Katherine Graham. Graham took control of the WashPost after her father named Philip Graham (Katherine’s husband) as publisher, and Philip struggled with mental illness and finally committed suicide. One would expect a ball-buster image of journalism icon Katherine; instead, Streep shows a gracious heiress who assumes unanticipated power with self-doubt that belies her extraordinary talent and judgment. Every female viewer has been there when Graham sits silent in a large board room of squabbling men, then banters with and one-ups Ben Bradlee in a comfortable discussion where no one forgets who the boss is.

The best scene in the movie is when Graham weighs Bradlee’s advice to publish The Pentagon Papers despite grave financial and legal risk to the company. Then she asks Chairman Fritz Beebe, who recommends not running the story. After a brief pause, Graham decides to run it. No apologies, no further debate; she leads the discussion all the way to the Supreme Court, and the rest of the newspaper world follows her lead.

“The Post” and “All the President’s Men” capture a period of turmoil in American history that Baby Boomers will never forget, and that subsequent generations need to understand. It was a pleasure to see the story behind the story of Graham’s brave and ambitious work.
4 people found this helpful
See all reviews
Back to top
Get to Know Us
Make Money with Us
Amazon Payment Products
Let Us Help You
EnglishChoose a language for shopping. United StatesChoose a country/region for shopping.
© 1996-2021, Amazon.com, Inc. or its affiliates