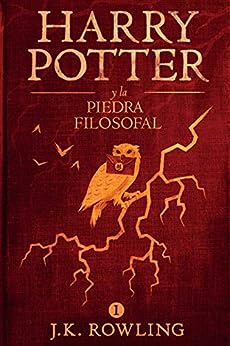 4.8 out of 5 stars
4.8 out of 5
930 global ratings
How are ratings calculated?
To calculate the overall star rating and percentage breakdown by star, we don’t use a simple average. Instead, our system considers things like how recent a review is and if the reviewer bought the item on Amazon. It also analyzes reviews to verify trustworthiness.
Top reviews

Bright Angel
2.0 out of 5 stars This is the Iberian "Vosotros" version, not Latin American Spanish used by > 90% of spanish speakers
Reviewed in the United States on June 21, 2019
Verified Purchase
A recent review by "Learning Castellano" highlights a major issue with the Kindle version of this Harry Potter book we are served up--and it appears exclusively served up. My two stars does not reference the book itself, but is to draw attention to this problem I wonder if Kindle editors even know anything about.

First of all to clarify: Latin American Spanish IS Castellano, or Castilian, Spanish. If we were being proper, we would always say "Castellano" or Castilian at least, when talking about "Spanish", as there are at least 4 official languages in Spain today--and have been several more than that up until not that long ago. Since neither Catalan, Basque, nor Galician--all official "Spanish" languages of Spain--are spoken in Latin America, it is proper to refer to the language spoken in most all of Latin America, outside Brazil, as Castilian Spanish, or Castellano.

That said, there are some major differences in how Castellano is spoken between Spain and Latin America. Latin America had largely been settled by folks from Southern Spain before the accent of Castile or Northern Spain, with the irritating "theta" (letter z or a c followed by an e or i and pronounced like the English "th"), came to dominate throughout the Iberian Peninsula. So no one in Latin America today says "Grathias" or "Thinco", nor did they in Seville in the 1500s.

More importantly grammatically, though, is that in Spain the Castilian language maintains, or preserves, or revives (I am not quite sure which or if all) the "vosotros" verb conjugation (meaning "you" plural, i.e. "you all", "you guys"), while Latin American Castilian does not, and uses "Ustedes" (with the third, rather than second, person plural verb conjugation form) instead.

This would sort of be like IF the English in England were continuing to use "thee, thou, thy and thine" for "you" (singular), while the US had moved on to use "you" for both the singular and plural forms of you. Now the fact that this is a fairly significant distinction in usage between Spain and Latin America does not change the fact that both are "Castellano"--everyone in Latin America understands "vosotros" for the most part, but it is like the language of the Bible or Shakespeare.

Now to my point: there are, according to Wikipedia, 480 million native "Spanish" (i.e. Castellano) speakers in the world. Of that total, nearly 47 million live in Spain. Mexico alone has more than three times as many people. In fact, there are more native Spanish/Castilian speakers in the US today than live in Spain. Fact: More than 90% of native Spanish/Castellano speakers in the world do NOT live in Spain and do NOT use "vosotros" in daily speech. The Audible version of this book I downloaded does NOT use vosotros, but uses "ustedes", as does more than 90% of the Spanish speaking world. But for some reason, and without any explanation or warning, the Kindle version/translation uses the "vosotros" form (and a few other nouns that are different from the Latin American version)--as if to try to tell everyone that the only Spanish deserving of any respect is that spoken in Madrid.

I have no problem with both versions being available as there obviously have been at least two translations made--those in Spain are certainly deserving of their version too. But I think if Amazon/Kindle us going to sell the "Vosotros" version on of this book on Kindle--which is only how around 9% of the "Spanish Speaking world" speaks in daily life--I think that fact ought to be pointed out before you buy the Kindle version, if they only offer one version. This is not, after all, Cervantes, or some piece of traditional writing from a Spanish/Castellano author--this is a translation of an English children's book (though one enjoyed by adults too).

Imagine the uproar if publishers tried to impose "thy, thou, thee and thine" on US readers of the Harry Potter books, just because that was the "proper", old English, ca. 1500 AD. (And, I for one would be perfectly happy if we revived that in English because it would make our language far less confusing and ambiguous--but that hasn't happened) I doubt they'd sell many copies, but this is essentially what is happening when Kindle sells this "Vosotros" version of the Kindle book as the "Spanish" translation.
Read more
161 people found this helpful
Helpful
Report abuse

Gary J. Shannon
5.0 out of 5 stars Perfect.
Reviewed in the United States on March 16, 2019
Verified Purchase
As a beginning student of Spanish this book was at the perfect level for me. I struggled with the first few pages, waded through the first few chapters, and by halfway through the book, I was just simply reading it for enjoyment.
Read more
13 people found this helpful
Helpful
Report abuse

Leawood Dave
5.0 out of 5 stars Great tool to improve my Spanish reading skills.
Reviewed in the United States on January 18, 2020
Verified Purchase
I'm beginning/ intermediate Spanish speaker, native English language, and this book is not the easiest read. I already know the story, who doesn't, right, and that helps, but I'd still be lost without Google Translate as my guide. This is a great tool for helping me improve my Spanish reading skills.
Read more
3 people found this helpful
Helpful
Report abuse

Sephethus
1.0 out of 5 stars The audio is in Castellano (Latino Spanish) But the Kindle is in España Spanish
Reviewed in the United States on December 9, 2021
Verified Purchase
The audio is in castellano, the guy reading it is reading from an apparently non-existent version that I cannot locate anywhere on the planet. My kindle version is in the least spoken version of Spanish, that of Spain. El audio está disponible en Latino español pero el Kindle no está. Qua hay mae?
Read more
Helpful
Report abuse

Josue
5.0 out of 5 stars A good way to practice reading in Spanish
Reviewed in the United States on December 15, 2021
Verified Purchase
It’s definitely a good starter book to getting into reading in Spanish, especially with the Kindle instant translate. I would highly recommend.
Read more
Helpful
Report abuse
See all reviews

Amazon Customer
5.0 out of 5 stars 5 stars
Reviewed in the United Kingdom on October 27, 2017
Verified Purchase
I have become far more confident reading and understanding Spanish since reading these books. What better way to enjoy myself whilst learning a new language than reading these wonderful books?
Read more
Report abuse