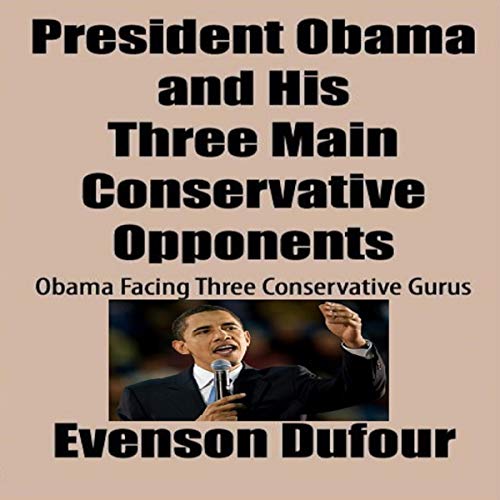 Evenson Dufour (Author, Publisher), Katrina Joyner (Narrator)
5.0 out of 5 stars 1 rating
See all formats and editions
Sorry, there was a problem loading this page. Try again.

This is Evenson Dufour's call for a more comprehensible, less confusing, and more honest politics. In this audiobook, he gives advice and proposes new, fresh ways of seeing changes that are happening in society. He is so proud to be the father of his American son, whom he loves very much. In fact, Evenson seems ready to teach his son the greatness of this nation in this book.

Evenson is a great thinker.

This clear and easy-to-listen audio moves on to explore new, innovative directions in the political field in the United States. He thinks America is at the best phase of politics, which he calls inclusive politics, or classic democracy.

The beauty of politics is characterized by the dynamics of the political environment that never stops evolving anywhere in the world.

I've been listening to 1290 AM WJNO for two years, and I like to pay attention to Rush Limbaugh for many reasons. First, I like his personality, even though I disagree with many of his ideas. Second, I strongly believe that he loves this country, which is my son Benecdael's country too. Third, he is funny and serious about his ideology. Furthermore, I love people no matter what their race, their ideology, and their faith are. Moreover, I think that he is a courageous man. Finally, he has an incredible impact on his fans, although I disagree with him in many things.

According to Rush, things are falling apart in the White House because they are working on so many things at one time.

I think that working on so many things at one time, if based on a well-organized plan, will not fail. I base this on the fact that Obama took the Oval Office at a time when so many things were going wrong. For example, the economic downturn, job losses, high gas prices, two wars....

Reg
5.0 out of 5 stars Highly recommended
Reviewed in the United States on January 16, 2011
President Obama and his three Main Conservative Opponents: Who is right? Who is wrong? This book is superb with Ideas. I had the chance to contact the author to congratulate him for his drive, his capacity of analyzing and simplifying difficult subjects, and his potential to write in English; even though, he is not a native English speaker. Wow, wow, wow!!! I am impressed.
The public likes Evenson writing style because he is amazing. And when I am reading his book, it as if I see him sit with me having a conversation.
I want to encourage him to keep up the good work. Rush Limbough, Glenn Beck, and Sean Hannity should read this book, too. There is a moral lesson in this book for everyone who really loves America.
As a reader, I feel the author, Evenson Dufour, speaks from his heart.
I can't wait to read his next publication. I strongly believe that he will become one of the best writers in America if he is not already.

I want to recommend this book to everyone living in America, and who loves America.
Read more
Helpful
Report abuse
See all reviews