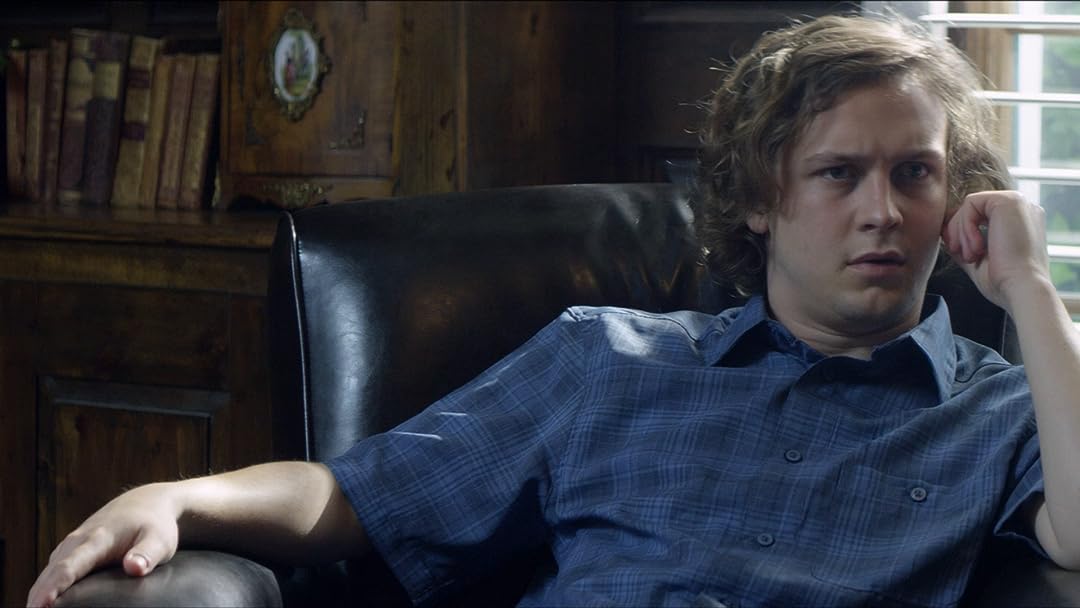 (361)
4.71 h 25 min2019X-RayPG-13
This horror-thriller from Blumhouse & Hyde Park with Director Franck Khalfoun (Amityville: The Awakening) follows Toby (Logan Miller) as he must survive an island retreat while a sinister force hunts him, leaving bodies in its wake.

Aslat8Reviewed in the United States on February 1, 2020
5.0 out of 5 stars
Some part of me, the younger part probably, really loved it before it was over.
Verified purchase
I started out thinking this might be a good scary movie for young people. And it definitely has an element of fun adventure in parts of it. The scary parts worked surprisingly well. After the first 1/3 about, I started to think I had picked another no good scares film but soon after I realized I was wrong and started to really enjoy the movie. It is super polished, well written, well acted, good sounds, good evil/protagonist. I was surprised by the ending and a few of the parts. I very much liked the parts intended to scare. I don't think I was scared but I enjoyed what showed up enough to appreciate the films style and the whole of it in general. I watch 91% scary movies. Again, I would normally be disappointed about a movie not being good enough and/or scary enough. But this one was an exception. I think you will enjoy if you give it until you see the 'bad / evil one'. Worth the $$.

NO nudity, sex, swearing, or too much unnecessary gore. People do get hurt pretty badly but it's not too graphic about it.

Hope there is a sequel!!

HermanatorReviewed in the United States on February 24, 2020
1.0 out of 5 stars
The ending ruined the whole movie for me
Verified purchase
I was gonna give this 4 stars until that stupid predictable ending. So I hated this movie. Would have loved it had it not been for such an awful ending. I really have nothing else to say about it except the kid was a good actor and the scenery was pretty.
10 people found this helpful

M. ArmstrongReviewed in the United States on September 2, 2020
4.0 out of 5 stars
Think "Sweetheart" with a male lead and more of a supernatural twist
Verified purchase
Okay, first off, everyone's taste in movies is sujective. Everyone claiming this movie is "horrible" and "unwatchable" or any variation thereof: first of all, calm down. It wasn't that bad. I figured out the big secret about 2/3 of the way into it but it didn't ruin the reveal for me in any way. Also, it's a horror movie; they never end super great for the protagonist(s) so stop complaining about the ending. I thought it was appropriate for the genre and not at all surprising.

It was just intriguing enough to keep me awake (I watched this movie after midnight last night), just scary enough but not SO scary that I wanted to turn it off. I thought the acting was serviceable although the protagonist was a little whiny at times. I chalk that up to his being a teenager and they can be pretty whiny.

I can't speak for the sound design or score because I was watching this in bed with my sleeping wife next to me so I had it turned down with the subtitles on. I may watch it again with the volume up and I'll update my review at that time.

The creature design was disturbing and frightening. I actually held my breath the first time it came on screen. There's not a lot of gore but I found the person-on-person violence pretty believable and sometimes hard to watch.

The pacing felt a little slow in the beginning but it picked up once our protagonist finds out he's not alone. It doesn't run away from you, though, and the I thought the pace was decent once things started happening.

Overall, I really enjoyed this movie. It's not one of those movies that makes you think about much or forces you to examine heavy themes or to introspect. If you want one of those, I would recommend Lost Child, which you can also find here.
5 people found this helpful

sean whiteReviewed in the United States on February 13, 2020
3.0 out of 5 stars
Good for background noise.
Verified purchase
Generic movie with enough production to be good background noise if you're doing something else. Other than that its your generic plot line, with typical generic twist, followed by the type of generic endings that seem to be the rage these days in horror. All in all, nothing either special or horrible about the movie. As I said, just good for background noise.
10 people found this helpful

Andrew "Big Ugly' HaleReviewed in the United States on December 18, 2020
3.0 out of 5 stars
Potential for an ancient horror
Verified purchase
Spoilers ahead:

There's a contrast of lives in this film. The boy and his father versus the girl and her mother. The boy seems spoiled and pretentious, thrust into fending for himself, where he was a comfortable worry-free teen. The girl seems innocent and self-sufficient, able to survive on her own, or at least with her mother's guidance, never knowing the comforts of a first-world society.

The main actor did a good job but the rest were OK. The whole premise was interesting though the lore and origin remained a mystery. This can work though it would be cool to see an ancient sitting involving the same events, giving just a slight hint at the lore. The Tarzan-like clothing of mom and daughter didn't seem practical considering their other clothing. The graphics of the creature in the darkness with a hint of light was neat.
2 people found this helpful

Sammy PieReviewed in the United States on April 6, 2020
1.0 out of 5 stars
This movie doesn't take prisoners...
Verified purchase
Meaning if you think you have seen enough bad movies that you can handle one more with ease, you are wrong.
Everything is bad about this movie. Especially the story and the directing. In fact it's so bad and boring and not captivating, that I had to stretch the viewing into two nights.
It's very very slow, with a jump scare (that you can't really see because of amateurish YouTube channel level quality of filming and "special effects") here and there. Only an hour into this snoozefest they give you a hint, an idea, about what you are wasting time watching. Then that idea is a cliche with a predictable outcome.
3 people found this helpful

Sgt AponeReviewed in the United States on February 17, 2020
3.0 out of 5 stars
Just ok
Verified purchase
You have to suspend a whole lot of disbelief to watch it. Teens get dumped on their own deserted island for 3 days to find themselves or whatever. Just the opening told me to get prepared. Not bad, but not great either.
5 people found this helpful

EllieMiReviewed in the United States on April 18, 2021
2.0 out of 5 stars
Can you say predictable?
Verified purchase
Spoiler alert: I mean the whole thing was so contrived and hackneyed. If you know every step of the way what is going to happen and is really happening, it is just boring and a good movie to do laundry by because you don't have to pay attention. You had to know that the mother was not the predator, that the something was wrong with the girl, and at the end; well you know exactly how the ending will play out. The one character with any sense was the young man who said that by being on an island for a day, the kid was suddenly Rambo. At least it got me half way through my chores.
See all reviews
Back to top
Get to Know Us
Make Money with Us
Amazon Payment Products
Let Us Help You
EnglishChoose a language for shopping. United StatesChoose a country/region for shopping.
© 1996-2022, Amazon.com, Inc. or its affiliates