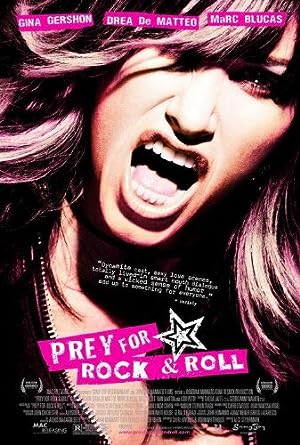 Steven J. WellerReviewed in the United States on January 11, 2013
3.0 out of 5 stars
What Do You Do If Your Dreams Don't Come True?
Verified purchase
Based on the autobiographical play by Cheri Lovedog, Prey for Rock & Roll is episodic and ultimately unsatisfying as a narrative, but makes up for it with a lot of heart and energy. The question being explored is a difficult one: what about all of the artists who are talented, dedicated, and who aren't going to make it? On the eve of her 40th birthday, Gina Gershon's Jacki re-examines her life and her choices as her girlfriend walks out on her. She's put her career, such as it is, ahead of their relationship one too many times. Her band, the Clam Dandies, has been playing LA's rock clubs for years without ever getting a record deal, and the fact that the opportunity has largely passed them by weighs heavy on all of them. The club scene rogues' gallery includes Laura Petty's Faith, a guitar teacher by day; her much-younger girlfriend Sally (Shelly Cole); and Drea de Matteo's Tracy, a trust-fund kid on the rapid decline. The music they make together is fun and energetic but it isn't going to make anybody famous, though that seems like it's almost beside the point. As Jacki puts it, she can either be a bitter rock chick who's in a band, or be a bitter rock chick who's not in a band, and that's not a hard choice at all. The performances throughout are solid and the tech specs (this was an early entry in the Digital Acquisition trend) are where they belong. If you know the rock n' roll club scene (in probably any city in America, at least), this will probably resonate. Whether or not you enjoy it will probably depend on where you are, in that scene.
2 people found this helpful

VideoPhileReviewed in the United States on November 11, 2006
4.0 out of 5 stars
Joan Jett without a big break
Verified purchase
An excellent movie, well cast, with a reasonable and easy to follow storyline. It really was reminiscent of Joan Jett's early days (in Philly)(I really expected Gershon to belt out 'I Love Rock and Roll').

It tells the story of the 'wanna be' groups playing clubs and wishing for a break. (There has to be at least 50 bands that are good that don't make it for every band - good or bad - that does and this is their story.

It deals with the gritty part of life trying to 'make it' as an artist.

-"What do you REALLY want to be when you grow up?"

-"When are you going to get a real job?"

-"When are you going to pay the rent?"

-"How are you going to pay the rent?"

There are touching and tragic moments as well as some good music all presented equally well. You won't finish this movie with a smile on your face - but you'll be wrung out - as if you are the one that just finished a club set... All in all, an entertaining movie (I have to admit the 'street justice' hammered out got my applause).

For those playing the club scene, or related to anyone struggling to make it - this is a must see. For everyone else - see it, then go support your local bar band.

Christian Reviewed in the United States on January 27, 2021
2.0 out of 5 stars
Plays but
Verified purchase
Movie has "PROPERTY OF LIONS GATE HOME ENTERTAINMENT NOT FOR SALE OR RENTAL" printed across the bottom if whole movie in BOLD letters covers a 4th of the screen

Vicki PeckReviewed in the United States on September 11, 2008
4.0 out of 5 stars
Music biz in it's purest light
Verified purchase
Caught this on cable & was totally enthralled - as a member of a rock band
(altho the only female) I can say with honesty this film has some of the seamier sides that are the reality of this business as well as the lifestyle some have fallen under. Gina Gershon is completely believeable
as are Drea, Shelly and Lori Petty (making for one hell of a performance);
to know Gina also did the vox etc as well? This IS the rawk-life kids!
It might not appeal to the masses but this film is a work of art.
2 people found this helpful

HFMReviewed in the United States on April 22, 2015
5.0 out of 5 stars
Loved it
Verified purchase
I can see how this movie fits the heading "Cult Classic." And I can see how it wouldn't be for everyone. But as a teen in high school I wanted nothing more than to be a rock star, so this one really spoke to me. Plus, I'm a big Gershon fan. If you like her, she's great in this. Overall a very well-cast movie. Fine performances all around.
2 people found this helpful

Mr. DReviewed in the United States on December 17, 2011
5.0 out of 5 stars
Prey for rock&roll
Verified purchase
If you are a fan of Gina Gershon{and who isn"t} you will love this movie.It is an iteresting story of four young women a rock group known as the "Clam Dandys",trying to "make it". The story is very interesting,and I found the acting superb. Although I am not a Rock fan, I enjoyed the music.I consider this film one of the multi-talented Gina Gershons best films. She is not good in the film,she is great.I believe everone that views this very entertaining movie will love it.
2 people found this helpful

April McadamsReviewed in the United States on May 3, 2018
5.0 out of 5 stars
Five Stars
Verified purchase
Love this movie hot chicks that play music YAY!!!

Thom CareyReviewed in the United States on December 20, 2009
4.0 out of 5 stars
The usual road for rock 'n' roll bands
Verified purchase
If you have a youngster interested in a career in rock 'n' roll, have them watch this movie to show how incredibly difficult it can be and what to expect. I enjoyed the interactions between the band members and Gina Gershon was terrific. There's nothing terribly exciting about this movie as it hits too close to reality for those musicians who don't hit the big time (which is just about all of them).
2 people found this helpful
See all reviews
Back to top
Get to Know Us
Make Money with Us
Amazon Payment Products
Let Us Help You
EnglishChoose a language for shopping. United StatesChoose a country/region for shopping.
© 1996-2022, Amazon.com, Inc. or its affiliates