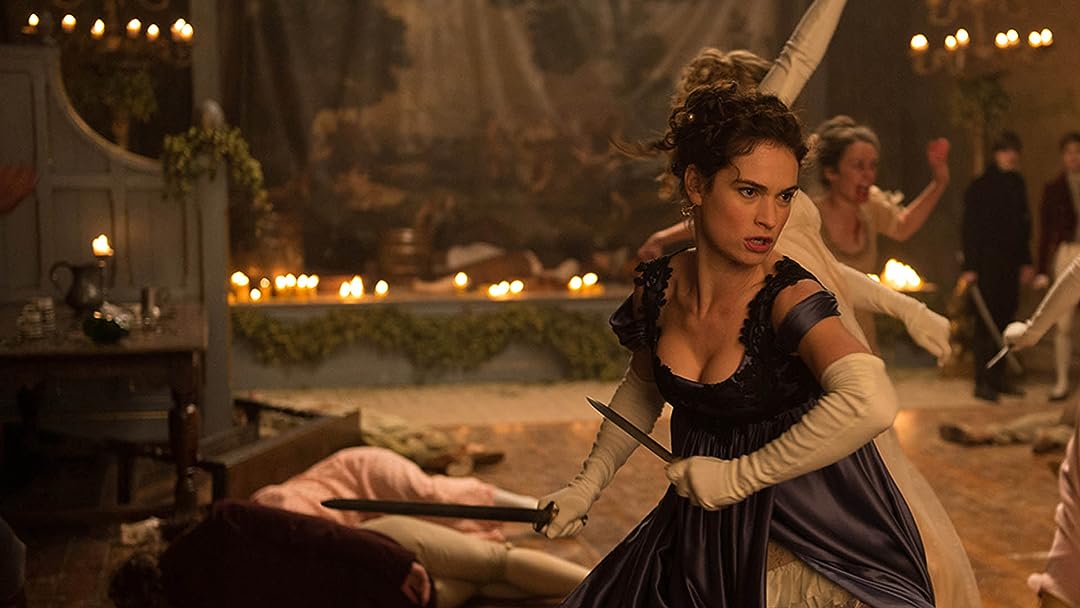 (7,798)
5.81 h 47 min2016X-RayHDRUHDPG-13
Jane Austen's classic tale of the tangled relationships between lovers from different social classes in 19th century England is faced with a new challenge - an army of zombies!

D.S.Reviewed in the United States on March 19, 2021
5.0 out of 5 stars
Ten Thousand Times Better Than You'd Expect
Verified purchase
I snubbed this film for years before watching it. I love Pride and Prejudice, and I love a good zombie flick, but for the longest time I thought putting the two ideas together would be like a stupid joke. However, one night after a couple drinks I had a "f*** it, why not?" moment and decided to put it on for the hell of it. OH. MY. GOD. I'm in love with this movie!!! Not only is it a decent rendition of Pride and Prejudice and does well to stick to much of the original relationships and dialogue, but it also has a fairly fun zombie angle as well. Believe it or not, putting the two together WORKS weirdly well! I was astonished. I mean, yes the premise is ridiculous, but it's a film that is very self-aware of that and it's a film that doesn't take itself too seriously, somehow making it extremely enjoyable. It's funny, it's endearing, it's romantic, and it's a little out there. I purchased this immediately after one watch. It's no Oscar nominee, but it's also not trying to be one. And I suspect if you're even looking at the reviews, you're not exactly looking for that anyway. Just give it a go. I promise it's worth at least one watch.
13 people found this helpful

K. HickeyReviewed in the United States on November 8, 2018
5.0 out of 5 stars
Don’t be an Austen snob, watch this movie!
Verified purchase
When Darcy said, “Her face is rendered uncommonly intelligent by the beautiful expression of her dark eyes and I’m forced to acknowledge her figure as both light and pleasing and that her arms are surprisingly muscular yet not so much as to be unfeminine...” I was hooked.

I love Austen and have watched most of the movie/tv adaptations along with reading the original works and other authors’ interpretations/adaptations. If you love Jane Austen books, movies and all things Austen then you must add this movie/book to your collection. They stay fairly true to much of Austen’s writings but with the fun addition of zombies. If you like quirky zombie movies, then have a go at this and maybe you’ll become an Austen fan too.

Lily James did a good job portraying a strong and kick-ass Lizzie Bennet. And Sam Riley was a handsome, brooding and also kick-ass Darcy with nods towards Colin Firth’s portrayal.

electroaddictReviewed in the United States on July 25, 2018
1.0 out of 5 stars
Might've been good (if it didn't undermine its own premise)
Verified purchase
In this universe, zombies are to blame for countless deaths and considerable destruction. The entire landscape (and the very course of human history) has changed drastically because of this fact. The elite class regularly sends their children to foreign countries so they can learn combat skills to aid them against future zombie threats. The subject of the undead is talked about daily by all... yet when push comes to shove, no one treats the danger seriously. I realize this is a "comedy", but the fundamental premise is flawed if zombies are ultimately treated like a joke. Our main characters casually ride past a horde of zombie orphans one day... without terminating them... only to see the orphans emerge as a menace in a later scene. A man asks his potential bride to give up her life of fighting because he can't tolerate the idea of having swords in his home. This is utterly asinine (and humorless to boot). I wasn't expecting grade-A material, but this is dumb.
23 people found this helpful

M. B. SpryReviewed in the United States on November 11, 2020
5.0 out of 5 stars
A fun romp through absurdity!
Verified purchase
The producers and director of this film, took an absurd concept and really made it work. The Jane Austen aspects are played totally straight as the characters are forced to cope with a zombie apocalypse. Everyone in the aristocracy must come to grips with the harsh realities that present themselves—and do so with a stiff upper lip. The Bennet sisters are no exception, and having only their father as the traditional male protector, they must take a warrior role upon themselves. Thus, the girls fight off zombie assaults as they pursue romances and marital interests. The film is well cast with British stalwarts such as Charles Dance and Lena Headey. Lily James does a fine turn as Elizabeth Bennet and meets her match with Sam Riley portraying Mr. Darcy. This cast could easily carry a straight-up adaptation of Pride and Prejudice for the BBC.
If you have enjoyed Jane Austen adaptations in the past and also sport a devilish side, this may be just your cup of tea. I'm a tough critic of films and I loved this one.
5 people found this helpful

Edward M. Van CourtReviewed in the United States on September 6, 2018
5.0 out of 5 stars
Jane Austen's zombie outbreak
Verified purchase
"Pride and Prejudice and Zombies" is classic for the ages. This romance is set in the midst of the zombie outbreaks in England of the Regancy era, roughly the first decade of the nineteenth century. It chronicles the trials and tribulations of the Bennet sisters and their parents as they seek affluent husbands, so they can establish themselves in the upper tiers of English society, while defending themselves from the zombie menace. The Bennet sisters are only modestly accomplished at the womanly arts, but gifted in the martial arts. Notably, their father chose to send them to a Shaolin temple in China rather than for schooling by samurai in Japan, as was the habit of the moneyed classes. In this setting, Elizabeth, a willful and intelligent girl (both undesirable traits in a prospective bride of Regency England) scorns an affluent and eligible bachelor, Mr. Darcy, a zombie hunter, while attracting his attention. There is competition for Mr. Darcy's affections, the difficulties faced by the other Bennet sisters, other suitors, and of course. numerous zombies.

I enjoy this movie greatly. I am not much of a fan for Jane Austen or zombie movies, but this reworking of an English classic succeeded for me. There was humor, horror, action, and romance in equal parts while preserving the main elements of Austen's novel. I am not suprised that it worked so well, as the cast was stacked with some of the best talent of our time, especially Charles Dance, Lena Headley, Lily James, and a brilliant performance by Matt Smith as the inept Mr. Collins.

JacobReviewed in the United States on April 30, 2021
2.0 out of 5 stars
Compared to the book, a laughable mockery of a good parody. Don't waste your time.
Verified purchase
Some parts were okay and I liked the costumes and settings and such. That's about it. They changed so many things from the book that this wasn't even the same story. I loved the book because the zombies were tastefully written in and didn't interfere with the majority of the plot. This made the story all about the zombies. I get the draw, I really do, but it would have been better to write a new story from scratch. Everything was crammed together and important scenes were either rushed or skipped altogether. Characters and situations were entirely changed. Elizabeth was made weaker, even losing entirely to Lady DeBourgh (who, by the way, was turned into an honorless snake rather than a haughty, insufferable, egotist). Given Elizabeth's new lack of skill, it seems that her plot armor was the only thing that kept her alive throughout the movie. Darcy was an entirely different person. He only scowled and had none of the air of an aristocrat. So many important things were cut out that his proposal really came out of left field since we saw none of his growth as a person. Some characters were omitted and, for some reason, zombies were given characters and lines instead. The fight scenes were terrible in the sense that, despite everyone being so proud of their respective disciplines, there was no attempt to actually distinguish any while fighting. They just kinda swung their blades around with reckless abandon.
Although he was not the same character from the book, Matt Smith's potrayal of Parson Collins did make me laugh. For the most part, he was faithful to the character's behavior, I think.
On it's own, a moderately passable film with no rewatch value. Compared to the book, a laughable mockery of a good parody. If you liked the book, don't waste your time with this. If you've never read the book, you may at least get a few laughs.
One person found this helpful

EvangelineReviewed in the United States on July 7, 2016
4.0 out of 5 stars
Surprisingly enjoyable!
Verified purchase
I wasn't sure I would like this movie, but I decided to give it a try. I love Pride and Prejudice, I enjoy watching zombies (thanks to The Walking Dead) so I figured, why not watch something that combines the two. I was pleasantly surprised to find that after 30 or so minutes into the movie I was actually looking forward to seeing how this would all end. I have to say I LOVED the scene where Darcy proposes to Elizabeth, that was absolutely hilarious...I rewound that scene a few times. While I was originally skeptical of what I thought would be a cheesy horror, tongue in cheek movie, was really very entertaining! I did not care for the little clip after the credits, I thought that was unnecessary, I like my movies all tidily wrapped up, but overall I actually have the desire to watch this crazy movie again!
18 people found this helpful

Kindle CustomerReviewed in the United States on November 10, 2016
4.0 out of 5 stars
Surprisingly good . . . even with zombies.
Verified purchase
I hesitate to give this mash-up my highest rating because . . . well, zombies. I'm not a fan.

I am, however, a fan of a good story, and this is a very good rendering of the classic Jane Austen version. Much of that praise goes to Lily James who helps preserve the feisty character of Elizabeth Bennett without descending into camp with the addition of zombies. Darcy is as full of pride and prejudice and as dismissive of Lizzy as ever. Darcy does not eclipse Laurence Olivier's style and hauteur, Matthew MacFadyen's innocence and understated hesitance, or even Colin Firth's sheer romantic turn as the formidable Darcy, but Mr. Huston does an admirable job and matches Lily James's performance well.

I have to admit that dismissive though I was when the book first came out, I am delighted with the reality of "Pride & Prejudice & Zombies", even with the zombies and now would like to read the book. The addition of Charles Dance as Mr. Bennett is a more formidable father and less willing to succumb to his wife's silliness, but Lena Headey as Lady Catherine is powerful and reminiscent of Queen Cersei of Westeros. All in all, a delightful surprise and a creditable version of Austen's ironic novel.
7 people found this helpful
See all reviews
Back to top
Get to Know Us
Make Money with Us
Amazon Payment Products
Let Us Help You
EnglishChoose a language for shopping. United StatesChoose a country/region for shopping.
© 1996-2022, Amazon.com, Inc. or its affiliates