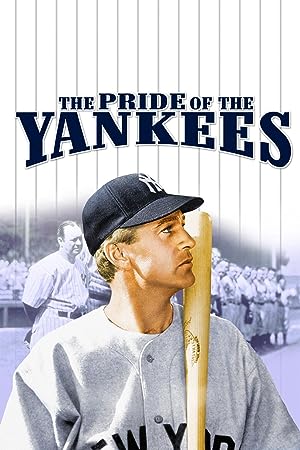 The Pride of the Yankees

(857)
7.62 h 8 min1943ALL
The story begins before World War I, when young Lou Gehrig begins dreaming of becoming a professional ballplayer. Lou's immigrant parents (Elsa Jansen and Ludwig Stossel) insist that the boy attend Columbia University to become an engineer. While in college, Lou becomes a star athlete, and, with the help of sports journalist Sam Blake (Walter Brennan), he is signed by the New York Yankees and joins their big-league lineup in 1925; real-life Yanks Babe Ruth, Bill Dickey, Bob Meusel and Mark Koenig play themselves. He earns the nickname "The Iron Man of Baseball" because he never misses a game but In 1939, Lou discovers that he has a fatal neurological disease called amyotrophic lateral sclerosis (now known, of course, as "Lou Gehrig's Disease").

Small~Town~GirlReviewed in the United States on April 6, 2017
5.0 out of 5 stars
~ If You Love True Stories, True Love, or Strength of Character, this Movie is Well Worth Your Time! ~
Verified purchase
The Pride of the Yankees is the true story of "Iron Horse" Lou Gehrig, who was given his nickname of the "Iron Horse" because he played 2,130 consecutive games, never missing, always giving all that he had to his team and his trade. Wow! He is definitely a super hero, strong in character and well worthy of his fame, loyal and true, a rock. We absolutely love this movie, catching a glimpse into his life, from his humble childhood up to his fame and his true love and thoughtfulness for his wife and, through all that he went through, his final speech, "Today, I consider myself the luckiest man on the face of the earth" and "I might have been given a bad break, but I've got an awful lot to live for." What a beautiful and strong man. His own and his beautiful wife's courage and strength are inspiring.

This movie has everything, really. True sports stories are usually inspiring, but this one may be the best ever. Also, it's very cool that Babe Ruth, Bill Dickey, Bob Meusel, Mark Koenig of the Yankees actually played themselves (How cool is that?!) and Bill Stern (host of the first sports talk show on radio) also played himself. We enjoyed this movie immensely. It truly has something for everyone. If you love old movies, true stories, true love, and strength of character, it's well worth your time. Fabulous movie! Absolutely.

I. M. IconoclastReviewed in the United States on October 21, 2022
5.0 out of 5 stars
Life is tough and then you die
Verified purchase
Lou Gehrig was one of the greatest baseball players of all time, and one of the most courageous as he fought a disease that was named after him. It's very debilitating and unpleasant. Lou played with the New York Yankees at a time when the likes of Babe Ruth were with them also. It's a movie that will gnaw at you for a while. Not easy to forget.

CathyReviewed in the United States on August 9, 2020
5.0 out of 5 stars
Highly recommend this as an all time great baseball flic!
Verified purchase
From a simpler time. A heart full look into the life and times of Lou Gehrig and the the disease that took his life. Much was learned from his difficulties making it so that Doctors today can utilize data from Lou’s battle. The named it after him “Lou Gehrig’s disease”, but is also called “ALS”.
(Amyotrophic Lateral Stenosis.) Super great movie with real baseball hall of famers playing themselves to honor Lou and his sweet wife.
One person found this helpful

Samuel F. CrowReviewed in the United States on March 22, 2020
5.0 out of 5 stars
Great movie
Verified purchase
Since I was a kid I’ve loved the old baseball movies. But this movie was made during better times. Baseball is well potrayeed in this movie and I totally recommend it to any fan. Though, it becomes sad at the end we know the real players of baseball especially the Ironman Lou Gherig.
3 people found this helpful

KonreiReviewed in the United States on November 12, 2004
5.0 out of 5 stars
I Consider Myself The Luckiest Man On The Face Of The Earth
Verified purchase
PRIDE OF THE YANKEES is no doubt the greatest baseball movie ever made. The mythologized life story of the New York Yankees "Iron Horse," Lou Gehrig, who played an astounding 2,130 consecutive games (and this in the days before Sports Medicine, no apologies to Cal Ripken), PRIDE OF THE YANKEES is a celebration of good old-fashioned Americana. Gehrig, as the gifted only child of German immigrants, is the son we all wish we could have. His tragic death at 38 from ALS (Lou Gehrig's Disease) robbed the world not only of a phenomenal baseball player but of an icon of determination and grace.

Gary Cooper, himself iconic, plays Gehrig true-to-life as a dedicated husband, friend, son and teammate. The Norman Rockwell touch is rounded out by the adorable Teresa Wright the 1940s actress who was undoubtedly June Cleaver's mentor. Babe Ruth appears as himself, poking fun at his own legend.

Although the movie is myth-magical, the truth is that Cooper's stainless portrayal of Gehrig is as true to life as it can be. Lou Gehrig truly was a big kid who loved to play ball. And that is all. We could all use a little such PRIDE nowadays.
10 people found this helpful

Poodle & NoodleReviewed in the United States on September 4, 2017
5.0 out of 5 stars
Must see movie. Entertaining, Based on true story. Gary Cooper is so great and Killer good looks! Other stars are very good too!
Verified purchase
Oh my gosh, I loved this movie! I never knew much about Gary Cooper before this. He's now my favorite old movie star, replacing Clark Gable and Cary Grant. What a "heart throb he was! Didn't think I would like it, because I am not into baseball, but abslutely loved it. So entertaining - funny and sad. Searching and waiting for other Prime movies with him. Great movie, too!
8 people found this helpful

Ken FontenotReviewed in the United States on March 1, 2004
5.0 out of 5 stars
Courage and Heroism in Perfect Form
Verified purchase
"The Pride of the Yankees" is without a doubt one of the best baseball films of all time. Why? Because it isn't just about baseball. It's about a real person seeking that seemingly impossible American dream and capturing it, only to lose it all too soon. Cooper plays Gehrig with so much heart in this film, that the movie almost seems unreal due to the fact that Gehrig was such a good person, both as a human and as a star athlete.
There are few professional athletes in the world who show so much character and so much love to others as Gehrig did. He faced death with honor and courage. He was and is a true hero. If you're looking for an athlete for your children to look up to, pick the "Iron Man of Baseball."
This film does exceptionally well in capturing the heart and soul of Gehrig. It is a great family film and I highly recommend it. Gehrig might have been in Ruth's(and later, DiMaggio's)shadow, but he was so much bigger than these guys. He was honest, hard-working, and approached people long after the cameras were gone.
Add this one to your collection. It's a keeper, even if you don't know the difference between a baseball and a ball of yarn.
6 people found this helpful

CEReviewed in the United States on March 20, 2018
5.0 out of 5 stars
My favorite sports movie of all time
Verified purchase
Tearjerker of a movie, and the "Luckiest Man" speech at the end is still one of the most powerful scenes on film 70+ years later. A movie you don't have to be a fan of baseball or Gary Cooper to love it. Gehrig was not a perfect man, but for those too young to know anything about him, this movie gets enough right that viewers know he was the kind of American from whom we could all learn some grace and humility. Supporting cast is phenomenal too.
5 people found this helpful
See all reviews
Back to top
Get to Know Us
Make Money with Us
Amazon Payment Products
Let Us Help You
EnglishChoose a language for shopping. United StatesChoose a country/region for shopping.
© 1996-2022, Amazon.com, Inc. or its affiliates