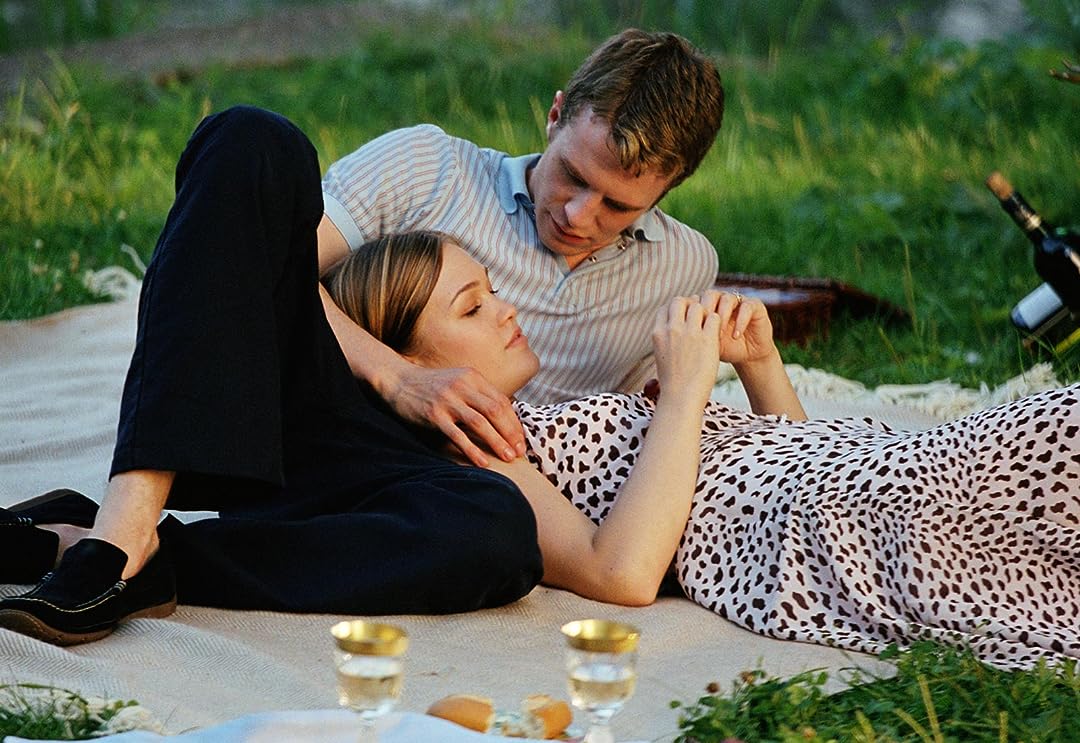 The Prince and Me

(2,145)
5.91 h 51 min2004X-RayPG
A fairy tale love-story about a pre-med student who falls in love with a Danish Prince who refused to follow the traditions of his parents and has come to the US to rebel.

Amazon CustomerReviewed in the United States on February 11, 2015
4.0 out of 5 stars
Nice movie to see
Verified purchase
Nice movie, a feel good movie. However, one thing I had trouble wrapping my head around was when Paige and her prince went to her farm for Thanksgiving. It's Wisconsin in November and everyone was running around in shirt sleeves. Anyone involved in this movie ever been to Wisconsin in November? I don't think so. The scenes of Denmark were beautiful but some of the American scenes were less than believable. Apart from the total lack of knowledge about the Midwest in the late fall, it was a cute movie and I liked the fact that the girl did not give up her dreams of being a doctor for the guy. He had to acknowledge what she wanted in life. The sequel of the movie "Prince and Me 2" however, was really silly and I don't recommend it. The actors did a great job, really sold their characters.
15 people found this helpful

Carol LarsonReviewed in the United States on August 23, 2018
5.0 out of 5 stars
It is a love story..
Verified purchase
I thought it was good I didn't exactly agree with Paige, if she didn't want the love from the Prince and chose to complete her education then it should never had begun but then there would be no story to tell would there. The Prince showed his love a lot more than she did. After all he was the King of Denmark and he still wanted her and went to America to find her.

MagnoliaNReviewed in the United States on September 1, 2018
5.0 out of 5 stars
The turn of the gender norm
Verified purchase
I thought this was a great film as a whole. The storyline was well brought to the viewers attention. The way they took a strong female lead and told a greater story. They take her through there royal routine and she starts to notice how little impact she would have where she was so she goes back to the states to finish her degree. She choose to put self eambishin first so the she can fulfill her destiny instead of pushing it to the side for love. By standing on her grown and walking away from marriage and the royal family it only grew Eddy's love for her. The ending truly makes my heart melt because everything works out the way it should. But don't take my work for it go ahead and watch it yourself
One person found this helpful

Mark J. FowlerReviewed in the United States on November 6, 2004
4.0 out of 5 stars
An Above Average Modern Fairy Tale
Verified purchase
The Prince and Me falls into two related genres - Romantic Comedy and "Cinderella Story". As a romantic comedy it is just average and includes several cliches that drive me crazy in this genre.

There are MANY romantic comedies where one character has a secret they hide from their love interest. In "Prince and Me" the secret is that "Eddie", the Danish student who shows up one day at the University of Wisconsin (played convincingly by Luke Mably) is actually the Prince and soon to be King of Denmark. (It is extremly convenient for us that all the Danes in the film including the royal family, prime minister, servants and paparazzi all speak English exclusively!) Our heroine, a farm-girl pre-med student, is played by Julia Stiles, and Ms. Stiles continues a budding acting career where she plays women of depth and character. Her Paige Morgan is accepted to Johns Hopkins Medical School around the same time she discovers Eddie is a Prince, and she aspires to work as a Doctor in an underserved country.

Prince Edvard GOES to Wisconsin because he's one of those Euro-trashy princes in the beginning of the movie and he sees an ad for one of those videos where college girls pull their shirts up, and *these* girls happen to be from Wisconsin. Bent on meeting sleazy young girls at the U of W Edvard immediately becomes fixated on the least sleazy, most-principaled woman in sight.

When the scene comes where Paige discovers Eddie is the Crown Prince she doesn't think "hey.... the hunky guy I was just kissing in the library is actually a PRINCE!" Instead she shrieks at him "you lied to me!" (which is only true for those who consider that a lie can include what you don't say - Eddie only tells Paige that he has to "go into the family business" when he returns to Denmark.)

The King is ill at this exact moment and Edvard must jet back to Copenhagen, which leads to one of the better done Romantic Comedy cliche-moments, the one where one character flies off after the lovers have had a tiff, only to have the other character come flying after them on the next plane. (If you think I've given anything away here, you haven't seen many Romantic Comedies.)

The third act begins here as Paige arrives in Denmark, is reunited with Edvard, and begins to contemplate a possible life as Queen of Denmark. During the breakfast where it first dawns on her that this is possible she suddenly looks uncertain. "Do you think the people will mind if I'm the Queen of Denmark and all I've seen is the airport?"

The Cinderella tale gets a thoroughly modern and believable upgrade, and it must have been difficult for Martha Coolidge and the screenwriters to generate the required romantic conflict for the characters who seem to have everything. Paige is not only the girl getting to go to Johns Hopkins, but the Prince falls in love with her too? There's conflict here?

Creepy Joe BidenReviewed in the United States on October 16, 2021
5.0 out of 5 stars
Defeats modern dating culture
Verified purchase
It gets the psycho militant you know who's angry , so therefore it gets 5 stars. Traditional love story that shows the reality of what going after your heart and happiness can bring you.

The cat lady commenter who gave it 1 star will marry her cats. While other girls will be happy with a family.

Tamara WauchopeReviewed in the United States on November 22, 2021
5.0 out of 5 stars
I really enjoyed this quirky love comedy
Verified purchase
Although like most movies, one would like to change a few lines or even twists, for the most part it was done well. True to their characters was a plus, and both leads were very believable, of course with the except of a line or two. Otherwise, you'll really enjoy the movie - more than worth the watch!

A. BurchfieldReviewed in the United States on September 28, 2004
3.0 out of 5 stars
A lot better than I expected it to be
Verified purchase
I watched this movie, on TV, expecting it to be all right but not great- aimed at young teen girls. It is that but it actually does the story pretty well anyway.

The plot is about an irresponsible, somewhat lazy, fictional Danish Crown Prince who decides to go to Wisconsin after seeing a commercial for a video of Wisconsin college girls going topless for some stupid video. At the university he meets a very serious minded girl who has no time for someone like him (he's using an assumed name and she doesn't know who he really is).

Things go badly for a while but gradually thaw as she needs help with her Shakespeare class (he's an expert at it)and it seems he needs her help in a lot of things. He ends up being invited to her home for Thanksgiving break and gets along really well with everyone, the romance really gets started then.

Back at school things go well until the paparazzi get some incriminating photos of the two of them. Paige is furious when she finds out that "Eddie" is actually Crown Prince Edvard of Denmark and ends the relationship. At semester's end he goes back home to his royal duties and Paige finds that she can't bear to be without him.

From here on the movie does get kind of rushed and somewhat weak as she instantly decides to rush off to Denmark (with one small piece of luggage)with the aid of her own and her friends combined credit cards paying for a ticket. Once in Denmark her cab is stopped by what turns out to be a Royal parade. Paige gets out and tries to get Eddie's attention but can't. The crowd recognizes her from all the tabloid pictures and starts chanting her name, Eddie hears and rides his horse over to pick her up. Things really blur along but Paige seems to get along with most everyone except the Queen and even they are all right once the Queen sees what a positive influence Paige has been on Edvard. At almost the end of the movie Paige suddenly gets cold feet and breaks off the engagement, leaving Denmark as the now King Edvard III makes a speech to his subjects. Some months later Paige has graduated and can now go on to medical school as she's always wanted. She turns at hearing some Shakespeare, Edvard is there, he tells her he'll wait for her, she accepts his proposal.

The Denmark on part of the movie was less than half of the story and far too rushed along but the happy ending was nice.

One thing I found interesting was when the queen took Paige into the royal vault to try on some jewelry for some event. I remember thinking that the "Harry Winston" necklace she tried on was probably worth the price of her father's farm, turns out in the credits that Harry Winston did supply the jewelry shown.
7 people found this helpful

Hannah WoodsReviewed in the United States on October 10, 2021
1.0 out of 5 stars
SO cheesy
Verified purchase
If you're lactose intolerant beware of this movie. Also so unrealistic. Not only because he is a prince but she completely changed herself for him and forgot her goals. You should never do that for a man. Even if they're a prince.
See all reviews
Back to top
Get to Know Us
Make Money with Us
Amazon Payment Products
Let Us Help You
EnglishChoose a language for shopping. United StatesChoose a country/region for shopping.
© 1996-2021, Amazon.com, Inc. or its affiliates