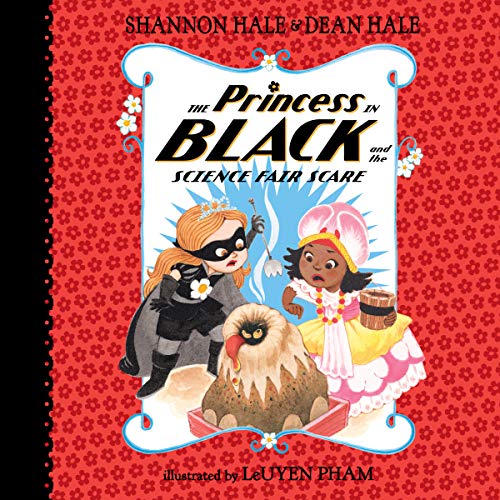 List Price: $9.80
You Save: $0.81 (8%)
By completing your purchase, you agree to Audible’s Conditions Of Use
Sold and delivered by Audible, an Amazon company
Share

4.9 out of 5 stars
4.9 out of 5
1,461 global ratings
How are ratings calculated?
To calculate the overall star rating and percentage breakdown by star, we don’t use a simple average. Instead, our system considers things like how recent a review is and if the reviewer bought the item on Amazon. It also analyzes reviews to verify trustworthiness.
Top reviews

L. Lindauer
5.0 out of 5 stars Kid favorites
Reviewed in the United States on September 25, 2018
Verified Purchase
The first Princess in Black book came out in January 2015. That spring, I was babysitting for some co-workers of mine. Their daughter Analise would have been 6, and their son Jonathan, 3. I read the book to them. I can vividly remember Jonathan constantly jumping up to do this or that every few minutes. He couldn't stand to sit still. Analise got so aggravated with him because I had to keep stopping and she was dying to know what happened. We made it though the book and she loved it. I was babysitting them again in the fall, and they wanted me to read Princess in Black. That time, they both sat still in rapt attention. I was shocked at how big a difference a few months had made. Jonathan frequently said something along the lines of "Oh, we're coming to my favorite part." I remember it distinctly because I kept thinking, "How in the world do you know what's coming next? You weren't even listening the first time!" Apparently he was. He just hadn't been able to sit still that long.
We have read the Princess in Black books countless times over the years. They frequently ask if a new Princess in Black book is coming out. I saw The Princess in Black and the Science Fair Scare on March 21 and immediately pre-ordered it. When I shared the news with them, they were super-excited. Over the last six months, they have frequently asked me if it had come out yet? I told them it wouldn't be out until after Labor Day. Ever since Labor Day, almost every time I have seen them, the first words out of their mouths were, "Is the new book out yet? How much longer?" We have literally been counting down the days for about 2 weeks. Since my book was supposed to arrive on its release date on Tuesday September 25, we made plans to get together today to read it. I saw them on Sunday and they asked if it had shipped yet, and I said no, but that I was still supposed to get it on Tuesday. We were all worried that it wouldn't arrive on time, because we were anxious to read it.
When I went to their house tonight to babysit, their first words were, "Did it come?" There was great rejoicing when I said yes. They were also excited to hear that I hadn't even opened it yet, but had waited to open it with them. They loved it. They are already asking how long it will take for Book 7 to come out.
I have also shared these books with many other young ladies. They all love them. After reading The Princess in Black Takes a Vacation, Analise, Jonathan, and a friend immediately wanted to act out the story. They put on a "play" for their parents. I don't know about all the other children in the world, but the kids I know all love them. They are good, clean reads, and as you can see from this story, they are favorites with girls, but boys love them too. After all, what's not to love with princesses and monsters put together?
Read more
12 people found this helpful
Helpful
Report abuse

Matthew Hickok
2.0 out of 5 stars Adults shouldn't have to hate the books they read to their kids
Reviewed in the United States on January 16, 2020
Verified Purchase
We have all of these books because my girls like them. They are mostly fine, as far as kids books go. My complaint with this series in general is that they are just clumsy to read. This one in particular is painful to get through because every single sentence ends with 'Said Princess <princess name here>'. So what's wrong with that you ask? Fair question.

I'm pretty sure this book was required to be a certain length so they just filled it with pages like this. It's horrible but I have to give it two stars because my kids like it.
Read more
6 people found this helpful
Helpful
Report abuse

Amazon Customer
1.0 out of 5 stars Awkward Read
Reviewed in the United States on August 31, 2020
Verified Purchase
This is possibly the most awkwardly worded children's book I've ever read. Any dialogue ended with "said princess ______". Which doesn't sound that bad until you realize that each princess is only saying a few words at a time. The names of the princesses were also pretty long which made it more challenging for my daughter to read. If kids are going to be challenged with words I'd prefer it to be something that expands their vocabulary, not ridiculous princess names. Definitely returning this book!
Read more
2 people found this helpful
Helpful
Report abuse

Katie
5.0 out of 5 stars Great addition to the loved series!
Reviewed in the United States on October 21, 2018
Verified Purchase
My 7 year old homeschool first grader LOVES these books. I have read them all to her and she is reading through the second book aloud to me currently. The story line is fun and cute. Love that she is a princess who fights monsters. Our two year old likes the pictures and all the monsters. My daughter reads 1-2 chapters aloud each sitting, can read more when not distracted by little sister. She is 7, in first grade and reading at about a second grade level. There are a few words she needs help with, but for the most part she can read these books on her own. This story is fun and keeps her engaged.
Read more
3 people found this helpful
Helpful
Report abuse

Nikoliko
5.0 out of 5 stars My 7 year old LOVES Princess in Black.
Reviewed in the United States on April 27, 2020
Verified Purchase
My 7 year old first grader LOVES these books. They are so fun inside with colorful pictures, the writing isn’t too small and the stories keep her wanting to read more. She reads each book in about two nights, And begs me to get her the next one. I ended up buying the whole series on here because she was so excited to read the next book once she finished one of them. I was so excited to see her so excited about reading and not wanting to put down these books.
Read more
2 people found this helpful
Helpful
Report abuse

Christopher_R
5.0 out of 5 stars Great for Girls!
Reviewed in the United States on July 6, 2019
Verified Purchase
Love it. Our 4 year old demands we read it over and over again. This is a great series for young girls. The vocab level is on point and our daughter is entranced with the stories. Perfect to practice comprehensive reading early: recalling and talking about what just happened in the story or why something happened. The artwork and plots are super cute too.
Read more
2 people found this helpful
Helpful
Report abuse

Kindle Customer
5.0 out of 5 stars Perfect first chapter book for my early reader.
Reviewed in the United States on December 6, 2019
Verified Purchase
This chapter book is perfect for my kindergartener who has moved past the early readers and wanted to try a chapter book. She might need help with a word here or there-but I think the challenge is good for her. The story is cute, the illustrations darling, and the message is one that I want my daughter to take to heart-being a princess and wearing pink is great if you like it, but so is wearing black and fighting monsters if that's what you like too-and they aren't mutually exclusive!
Read more
One person found this helpful
Helpful
Report abuse

Steph
5.0 out of 5 stars Great addition to series
Reviewed in the United States on November 28, 2018
Verified Purchase
My kids love the princess in black series and we’re excited to have a new one. I liked the teamwork involved in this and the message that all can become their own heroes
Read more
3 people found this helpful
Helpful
Report abuse
See all reviews

Megan
5.0 out of 5 stars Such fantastic books!
Reviewed in Canada on April 15, 2019
Verified Purchase
All of the Princess in Black books are such great books. The chapters are short but engaging. Great for early readers who get bored by typical picture books, want to be reading chapter type books, but who might not be there yet in terms of reading level.

The adventures are great, my son seems to really love the secret identity stuff, and as the series continues it seems that every character is getting a secret identity, which feels great.
Read more
Report abuse

Robert
5.0 out of 5 stars A great children's book.
Reviewed in Canada on May 29, 2019
Verified Purchase
A really fun story. Nice pictures. My kids and I enjoy reading this book together. Love the whole series.
Read more
Report abuse

Shawn G.
5.0 out of 5 stars Great series
Reviewed in Canada on May 31, 2019
Verified Purchase
This book series is great. Our pre-reader enjoys the stories and illustrations.
Read more
Report abuse

Barb H.
5.0 out of 5 stars Loved it
Reviewed in Canada on December 5, 2018
Verified Purchase
My 8 year old granddaughter loved the book. She has read all the other Princess in Black books and could hardly wait for this one to come out.
Read more
Report abuse
See all reviews
Back to top
Get to Know Us
Make Money with Us
Amazon Payment Products
Let Us Help You
EnglishChoose a language for shopping. United StatesChoose a country/region for shopping.
© 1996-2021, Amazon.com, Inc. or its affiliates