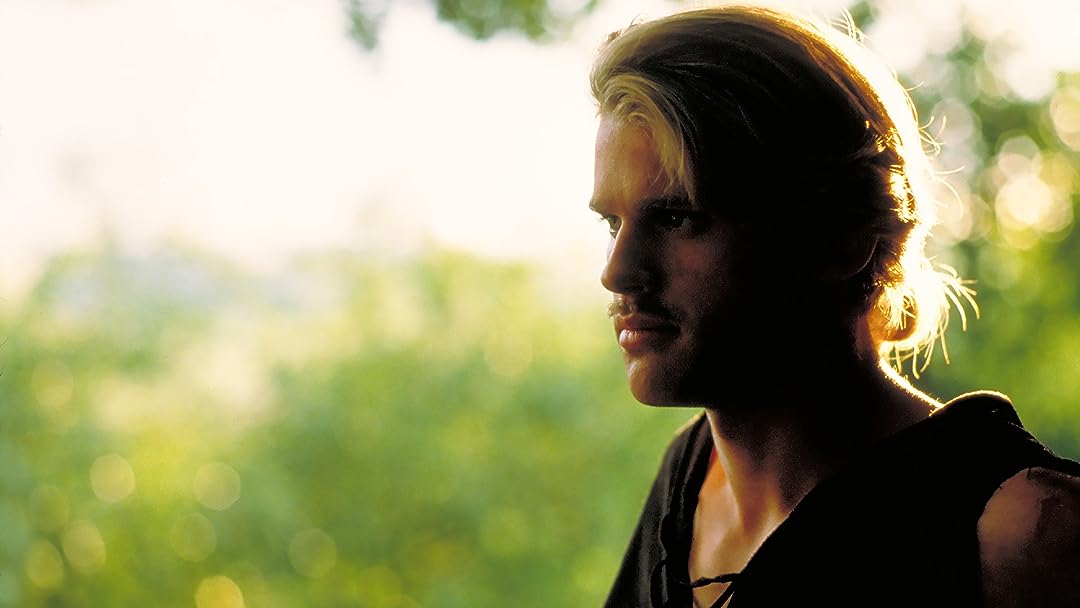 (27,159)
8.11 h 38 min1987X-RayUHDPG
You've yet to hear the tale? Inconceivable! Join Westley (Carey Elwes) on his epic adventure to rescue the fair Buttercup (Robin Wright) from the clutches of the evil Prince Humperdinck (Chris Sarandon) in director Rob Reiner's delightful classic!

BethReviewed in the United States on May 17, 2019
2.0 out of 5 stars
30th Anniversary My Butt
Verified purchase
[[VIDEOID:93b71cfdae30d6430dbba57467613bcf]] The company selling this product just stuck a cardboard cutout of a 30th Anniversary cover over the regular cover. I was dyin. I don’t personally care as long as the DVD works. I just wanted my kids to see my fav childhood movie.
109 people found this helpful

SarahReviewed in the United States on July 18, 2019
1.0 out of 5 stars
Fake cover superglued over real DVD case
Verified purchase
Received my "30th Anniversary Edition" version of the Princess Bride.. except, after I removed the plastic casing I quickly realized that the cover advertised was thick glossy paper attached with a single glob of superglue to the actual cover, which is a standard Princess Bride DVD. There's a DVD inside, and it plays the movie. But this is false advertising considering the other edition would have included more content. Even thought I'm not completely torn up over getting the regular version (I mostly just want to add the movie to my collection), now the DVD I do have has this mess of superglue. If you want the 30th edition, definitely don't buy this one. If you want the normal edition, buy a different one anyways because this one will have a different cover sloppily glued to it.
61 people found this helpful

EvaReviewed in the United States on October 8, 2018
5.0 out of 5 stars
Literally the best movie of all time
Verified purchase
If you've seen it, you get what I'm saying. If not, you MUST watch this movie. I don't recommend watching just any movie. I consider my taste in movies to be somewhat enlightened and refined, and having watched as many and varied movies as I have, I have not seen a movie that has so much charm. It doesn't tackle the big questions in life, it doesn't challenge you in any way, but it's a movie or every person, for every mood, with a little of everything in it, without it feeling manufactured or Disneyesque. It's like a hand knitted sweater made for you by a charished friend or family member, as opposed to one off a rack of identical sweaters. It makes me smile thinking of how many takes were ruined by Rob Reiner because he couldn't stop laughing, because that means it was made with a lot of passion. I could wax romantic on The Princess Bride forever, but the only way to know it is to see it.
61 people found this helpful

-TMcN-Reviewed in the United States on December 7, 2019
5.0 out of 5 stars
It killed my father!
Verified purchase
I do not think that title means what you think it means.

Despite being in software, around 10,000 uber-geeks who quote this movie (along with anything by Monty Python, Lewis Carrol, Douglas Adams and, inexplicably, Rogers & Hammerstein... no accounting for group-taste), my S.O. knew nothing about this.

So "Movie Night" it was. I expected us to have a few drinks with good sushi and just watch.

Ummm... nope. Despite her not knowing the "movie", she knew much that was in it. She had the zeitgeist, just not the title or full plot.

And this particular S.O. (I've only got the one, don't read too much into that, but my co-workers have some really geek-hip nerdacious S.O.s while mine can pontificate about the differences between Louis Vuitton, Christian Louboutin, Hermes and Gucci at great length... and makes a mighty good living doing it.)...

And this particular S.O. has like zero geek-cred, although you probably got that from the above paragraph. She was DELIGHTED to know so many bits and be able to place them in context.

So why watch this movie now? Because...
1. You already know and love it. And will be reminded of bits you've forgotten.
2. Because someone else will be amazed that so much they know came from it. "Have fun stooorming the caaastle!"
3. Because maybe we can pull society back from the current humorless brink.

J. RomanReviewed in the United States on April 25, 2018
5.0 out of 5 stars
I've seen this way too many times
Verified purchase
The best movie ever? Pretty much.

I teach middle school, and this is the movie I show every year at the end of the school year. I've done this for 5 years, and I always get the same reaction. "Ugh, why are we watching this, is this going to suck?" and by the end the kids are as entranced as Fred Savage's character. It's one of my favorite things about making them watch it.

This movie is funny, romantic, and has the best characters (also Carey Elwes!).

Be warned: It is a total late 80's movie. Buttercup is a basically useless female (though Robin Wright does a great job portraying her), and there are literally no POC to be found in the entire movie.
35 people found this helpful

MeganReviewed in the United States on March 26, 2020
1.0 out of 5 stars
Probably the only person that HATES this movie
Verified purchase
I first watched this film when I was about 14. I didn't like it and struggled to finish it, but my friend's mom rented it just for us. I thought I might have not understood it then, as SO many people have mentioned it to me over the last 10 years... Well, I still hate it. I don't mind cheesy acting, cheesy sets, low-quality cinematography, and so on if other elements exceed standards. However, nothing is above mediocre. The comedy is baseline; a 10 year old could write better jokes. The set is cheap and tacky. I known it's an older movie, but you can totally tell the rocks are plastic, you can see the ground bounce when they fall, and so on. The plot is predictable. The acting is awful. I truly don't see one good thing about this movie. Several have related it Monty Python, but I actually really like that movie. It's kind of cheesy, but the jokes are good. This was not that giving, however....
10 people found this helpful

Amy WReviewed in the United States on August 24, 2020
1.0 out of 5 stars
Crappy seller - be careful (great movie though)
Verified purchase
Fabulous movie that I was able to watch by paying to stream it - too bad I couldn’t watch it on the DVD that MovieMars sent me. They sent a defective DVD and then tried to pin it on me, saying that I ordered a DVD for the wrong region and conveniently ignoring the fact that I told them I have a universal DVD player that plays for all regions. The DVD is clearly defective and they are refusing to do anything about it because it’s more than 30 days since I purchased it. Word to the wise: open anything they send you right away and make sure it’s legit and functioning.
7 people found this helpful
See all reviews
Back to top
Get to Know Us
Make Money with Us
Amazon Payment Products
Let Us Help You
EnglishChoose a language for shopping. United StatesChoose a country/region for shopping.
© 1996-2022, Amazon.com, Inc. or its affiliates