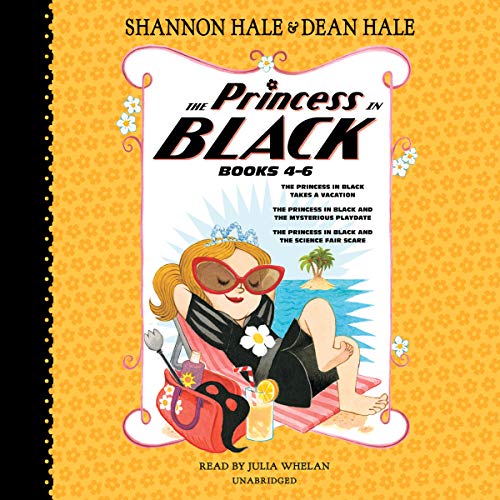 The Princess in Black Takes a Vacation: After battling monsters all night, a sleepy Princess in Black decides that she needs a vacation. After all, the Goat Avenger, a new hero who looks oddly familiar, has offered to protect the goats while she takes a much needed break. The very next day Princess Magnolia rides her bicycle to the seaside, where the air is salty, the sun is shiny, and the sea is as blue as monster fur. But just as Princess Magnolia is about to take a nap on her hammock, she hears a "ROAR"! Seriously? A monster? On the perfect beach? Impossible! Could a sea monster really ruin this vacation for the Princess in Black?

The Princess in Black and the Mysterious Playdate: Princess Magnolia and Princess Sneezewort have plans...mysterious plans, like a princess playdate! They dress-up slam! They karaoke jam! They playhouse romp and snack-time stomp! But then a shout from outside Princess Sneezewort's castle interrupts their fun. It's a monster trying to eat someone's kitty! This is a job for the Princess in Black. Yet when the Princess in Black gets there, she finds only a masked stranger and no monster in sight...or is there? Action and humor abound in this ode to friendship that proves that when shape-shifting monsters intrude on your plans, two heroes are better than one.

The Princess in Black and the Science Fair Scare: Princess Magnolia is excited. Excited and nervous. She's going to the Interkingdom Science Fair today to present her poster about seeds and plants, and when she arrives, she sees that her friends are there, too! Princess Honeysuckle made a mole habitat; Princess Sneezewort has built a blanket fort; and Tommy Wigtower has a talking volcano that's saying "EAAAAT"! Wait, what? A surprise goo monster makes this a job for the Princess in Black, and the Princess in Blankets is on the scene to lend a hand. But will two masked heroes be enough to save the science fair?

Enjoy a free audiobook + more
Learn more about Membership
List Price: $21.00
You Save: $2.62 (12%)
By completing your purchase, you agree to Audible’s Conditions Of Use
Sold and delivered by Audible, an Amazon company
Share

5.0 out of 5 stars
5 out of 5
5 global ratings
How are ratings calculated?
To calculate the overall star rating and percentage breakdown by star, we don’t use a simple average. Instead, our system considers things like how recent a review is and if the reviewer bought the item on Amazon. It also analyzes reviews to verify trustworthiness.

There are 0 customer reviews and 5 customer ratings.
Back to top
Get to Know Us
Make Money with Us
Amazon Payment Products
Let Us Help You
EnglishChoose a language for shopping. United StatesChoose a country/region for shopping.
© 1996-2022, Amazon.com, Inc. or its affiliates