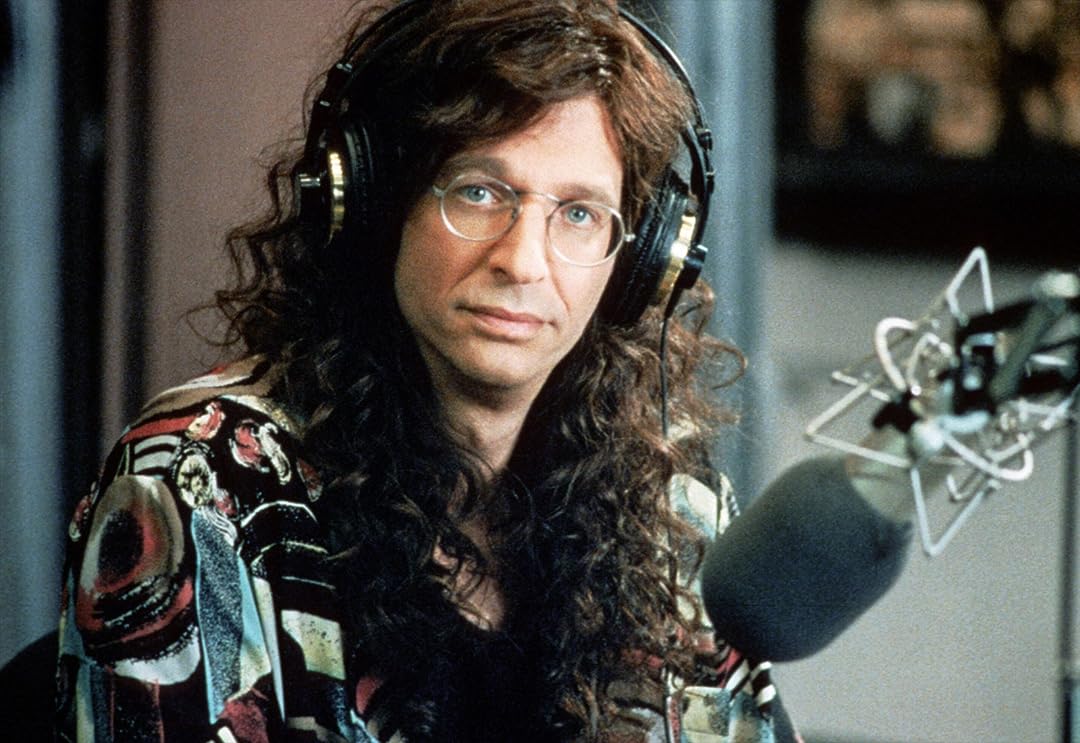 (1,755)6.91 h 49 min1997X-RayR
The life and career of shock-jock superstar Howard Stern (himself) is recounted from his humble beginnings to his view from the top.

JayJayReviewed in the United States on September 14, 2018
5.0 out of 5 starsLegend
Verified purchase
You can tell that a person is a legend when all the right people hate him. Therefore, Howard Stern is a legend, and this is the story of his legendary rise.

That doesn't mean that he gets a pass on things like treating his wife badly or making humor for humorless situations. But when it comes to making entertainment entertaining, and being a staunch defender of free speech, and speaking truth to (fake corporate) power, Howard Stern is an example for us all.

The wife gives it four stars. But right after giving it four stars, she says, "Wow, that was a GREAT movie!" So I went with my own evaluation of five stars.

This is not only a great film and clear work of hagiography, but placed in the context of his entire life (which is worthy of a superhero movie if not a hagiography) it is also a work of history. Read up on what happened after the AC/DC performance and listen to his show online if nothing else. This is one character in American history that, again, while far from perfect (or at times, even admirable), is worth you knowing about.

Goth Gone GreyReviewed in the United States on August 27, 2018
5.0 out of 5 starsAn inspirational tale about a boy that grows up and achieves his dream!
Verified purchase
This is a great story about a young boy who wants to be like his Dad, working In Radio. (Capitalization for emphasis, but I really want lights and sparkles on that, because it's special.) After a few cast changes to show age, the young boy turns into a college aged Weird Al Yankovic look-alike, doing much stranger things than the average parody song we so know and love. (Don't believe me? I added pictures to prove it.)

Luckily, there's another cast change hidden as a scene shaving off a mustache, and suddenly Weird Al turns into Howard Stern in all his testosterone-laden, FCC-challenging glory. Long live the King.

I read the book many years ago - not recently enough to remember how it compares to the movie. All joking aside, it's a decent watch about how Howard became a household name that started the shock jock style of radio, launched countless imitators, and managed to maintain a family along the way. (At least for the time frame of this movie. Life happens.) It stars Howard, Robin, and others that we're more familiar with by voice than by face, as well as actors and actresses to fill in other key roles as well. It doesn't contain any big reveals or surprises, especially years later when shock jock vs producer is common and personal lives are aired more than laundry, but it's a nice capture of the era it recreated.

One of my favorite movies? Probably not, but a decent watch anyway.
5 people found this helpful
Report abuse

The All-Seeing IReviewed in the United States on August 25, 2019
5.0 out of 5 starsWhere Raunchiness Meets Great Storytelling
Verified purchase
For better or for worse, Howard Stern has transformed his presentation from shock jock into something more introspective and complex, and "Private Parts" is arguably the point where we can first see him straddling that line.

While the film boasts the lesbian and potty jokes upon which he build an empire, from beneath it emerges a heartfelt story and nuanced characters. It's impossible to dismiss "Private Parts" as only one-note and lowbrow.

Raunch was once enough on its own, but "Private Parts" elevated it with more complete filmmaking. This is a benchmark comedy movie. - (Was this review of use to you? If so, let me know by clicking "Helpful." Cheers!)
-
WATCHED IT? THEN WATCHLIST: [[ASIN:B009ZM6WEC "Bad Santa,"]] [[ASIN:B07JVSYPZ7 "Stadium Anthems."]]
3 people found this helpful
Report abuse

joel wingReviewed in the United States on August 14, 2020
4.0 out of 5 starsHow Howard Stern found his style and place in the radio businesses
Verified purchase
Private Parts is the biographical film about Howard Stern, starring Howard Stern. It portrays the radio shock jock as someone who was completely insecure. The persona that he portrayed on the air was just an act. He actually questioned everything he did.

The film humanizes Stern. You would never know the young guy portrayed in Private Parts who used a fake voice and was afraid of tripping over himself would become such a gigantic radio personality. He was also a dedicated husband despite all the times he talked about sex with women on the air.

The main take away from Private Parts was that Stern struggled for years to get into the radio business. When he finally found his style, which was talking, doing skits, including plenty of sex he got in endless trouble with his bosses. It was like Stern against the traditional radio system, and he actually thrived on that. He included his disputes into his radio show and got more listeners because of it. That’s what the story really portrays is how Stern found his place in the industry. There are of course plenty of laughs along the way.
C
2 people found this helpful
Report abuse

Blizofoz45Reviewed in the United States on June 25, 2019
4.0 out of 5 starsBetter than his radio show
Verified purchase
The most interesting thing about this movie is the people who wanted to censor Howard Stern in 1985 are still the SAME PEOPLE who work overtime in 2019 to censor free speech: Corporate suits. The bigger the corporation, the more laughably insincere their approved "free speech" becomes.

They have agendas and they will fire anyone who doesn't conform, all while arguing amongst themselves about the financial implications. They see themselves as noble and decent while they forcibly remove honesty from their content. A more current example would be the Disney corporation.
2 people found this helpful
Report abuse

Michael H. TidemannReviewed in the United States on February 28, 2016
5.0 out of 5 starsRequired material for college class
Verified purchase
Okay. I confess. I played this film in one of my college media classes. AND THE STUDENTS LOVED IT. Stern tells a real story about a real DJ and how he rose to fame. And, and by the way, I will DEFINITELY continue to show it to my media classes.
11 people found this helpful
Report abuse

football fanReviewed in the United States on September 2, 2015
5.0 out of 5 starsTrash is Gold
Verified purchase
The golden voice of radio, or as he likes to call himself The King of All Media, Howard Stern, has proven in this movie "Private Parts" time and time again: "trash is gold."

In this 1997 movie Private Parts starring the King of All Media, Stern, and his cohorts, Robin Quiver, Jackie "The Joker Man" Martling, Struttering John, Bababooyee, etc., retells Howard Sterns climb to stardom ending up on top of the Big Apple. From his neighborhoods on Long island to Boston University, where he met his wife Alison, to Detroit radio, to Washington DC radio, and finally back to the Big Apple, NYC, radio this movie shows his drive and the obstacles, like Pig Vomit, a radio executive who dislikes him, he faced on his quest for stardom.

This movie is about his determination, and his vision of giving the public what they truly want: they want: to laugh. To make his listeners laugh: Stern uses sex.

Sex fuels his on air conversation. Sex sells; and Stern knows it. Even though the radio executives are concerned about his foul mouth and being censored by the federal government, once they see his ratings, which go through the roof in the early and mid-1980s, they realize they have a radio super talent in their mist. Many are listening and chuckling at Stern's sex antics on the radio. It's all an act, yet the most popular act in NYC, then around the country. The formula to Stern's success is sex,And he continues to rant about sexual taboo topics. Like the 1950s comic, Lenny Bruce, Stern is sex obsessed, yet unlike the comic Lenny Bruce, Stern had struck gold.

Thirty-three years after his NYC radio debut, in 1982, the movie was released in 1997, Stern is still a big star today. His success and drive back then when he first graduate college in the mid-1970s has kept him in the public eye today. Even though he has toned down his act on TV, Stern is still a celebrity.

In the movie, it seems as if Stern's fundamental belief is that his radio audience find European classical arts, like Mozart, boring: he believes his audience want to be excited and entertained. Cheap thrills means trash is gold. And he delivers by using sex. As a result, he ends up with spectacularly high radio ratings, and becomes a nationally media superstar.

As a movie, Private Parts is basically a biography. It could have been named the Howard Stern's Life Story. The movie also shows how he succeeded and rose to the top of his profession. How? He chatted about sex. In a puritanical society, such talk is trash, yet for Stern, as a result, trash turned into gold. He became a media superstar, or as he likes to say King of all Media.

As a movie, this one is a very good biography of someone who had climbed successfully and reached national stardom. For Howard Stern fans, this movie is a can't miss. If not a Stern fan, it's still worth watching.

Stern's climb to dizzying heights of celebrity stardom simply reflects how in our culture: trash is gold. That ideal has been proven time and time again: give the public what it wants, make that burger with fries, and where's the TV guide?

As far as the acting, Stern plays himself, and his acting is plausible, good enough. So is the acting of his cohorts. It's a fun movie to watch. More exciting culturally for many than listening and watching the Vienna orchestra perform Mozart's Magic Flute. Stern has tapped into the national consciousness of giving to he public what it wants. On the radio and screen. does the public want Rock n' Roll? Of course.. Beethoven? No. Howard Stern? Yes.
3 people found this helpful
Report abuse

TJ EurekaReviewed in the United States on August 16, 2018
5.0 out of 5 starsfar better than expected
Verified purchase
Always found Howard as he describes himself on the airplane, "having the maturity of a 3 year old". Watched this out of curiosity about his career. Surprisingly, I loved the movie and was sorry when it ended. Be forewarned future viewers, this movie may make you a fan. Not sure if he is still on the air, or if I'd be a regular listener, but I now have a new appreciation for his work, and for him as a person. This movie is well worth watching.
One person found this helpful
Report abuse
See all reviews
Back to top
Get to Know Us
Make Money with Us
Amazon Payment Products
Let Us Help You
EnglishChoose a language for shopping. United StatesChoose a country/region for shopping.
© 1996-2021, Amazon.com, Inc. or its affiliates