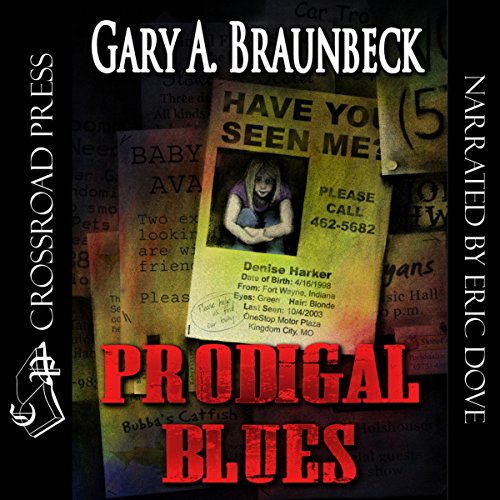 Gary A. Braunbeck (Author), Eric Dove (Narrator), Crossroad Press (Publisher) & 0 more
4.5 out of 5 stars 23 ratings
See all formats and editions
Sorry, there was a problem loading this page. Try again.

After he finds himself stranded at a truck stop in Missouri, Mark Sieber gets one of the biggest shocks of his life when he recognizes the face of a little girl on a Missing poster as belonging to the same little girl he saw only a few minutes before. Looking around for some sign of her, he comes back to his table in the restaurant to find the little girl sitting there, waiting for him.

"I'm sorry, mister," is all she seems capable of saying.

As the police and media begin to converge on the truck stop, Mark retreats back to his hotel room to call his wife and let her know what's going on, only to be taken hostage by the same people who released the little girl. But his abductors are little more than children themselves.

Ranging in ages from 12 to 19, Mark's abductors are in the process of escaping from a sadistic pedophile known to them only as "Grendel" - a man whose practices include torture and mutilation specifically, mutilation of the face.

Mark's abductors have all been mutilated by Grendel who may be very close behind them and need someone with a "normal face" to help them carry out their plan for justice and returning home.

For the next few days, Mark will come to understand not only the inhuman horror that these children have suffered, but how they eventually learned to fight back and how they discovered that Grendel and his practices are at the center of a very complex network catering to those who tastes run toward the molestation and mutilation of children.

Special invitation from Audible!
Learn more about Membership
List Price: $17.99
You Save: $2.00 (11%)
By completing your purchase, you agree to Audible’s Conditions Of Use
Sold and delivered by Audible, an Amazon company
Share

4.5 out of 5 stars
4.5 out of 5
23 global ratings
How are ratings calculated?
To calculate the overall star rating and percentage breakdown by star, we don’t use a simple average. Instead, our system considers things like how recent a review is and if the reviewer bought the item on Amazon. It also analyzes reviews to verify trustworthiness.
Top reviews

Artem44
4.0 out of 5 stars Definitely worth reading
Reviewed in the United States on June 4, 2021
Verified Purchase
Closer to 3.5 out of 5.
Disturbing, interesting and consisting of a villain who is handled very well. Strong desire to keep reading it and find out what would happen.
Characters are well formed and their dialogue natural for the most part. Some funny parts too based on some of the narrator's observations.

**SPOILERS AHEAD**
However there's a few things that prevent this from being a 5 star book. There are some very frustrating parts where there are pertinent questions that anyone would ask in that situation that don't get put forward by the main character, such as: "Where is the bad guy right now?" Main character just makes this strange assumption when another character mentions that he shot a man, main character assumes it was their captor.
Another: Main character doesn't think to read the number plates to the bus and trailer upon seeing the missing person poster for Denise. Maybe understandable to let a guard know at first, but then to not tell them which vehicle he saw her in or check plates at that point, very unrealistic.

One character is meant to be 12 but speaks like someone who is 40. Another is meant to be 20 but the main character mentions they "look like old buddies discussing their kids", when he and the character are chatting. Issues that could've been resolved fairly easily by the author.

Characters are well written (you get to know and love (or hate Grendel and his "business associates"). I can't tell you how many times I had to put the book down for a break to get my heart rate down to (somewhat) normal. I felt everything those children went through and the love they needed and their families they missed. I felt empathy for Mark and the children but nothing but hatred for Grendael--the evil one. Mark and Christopher, Thomas, Arnold and Rebecca were all heroes in their own way. I liked Mark's psychology used in situations.

Mike Mehalek
5.0 out of 5 stars This book both delighted and horrified me
Reviewed in the United States on July 26, 2014
Verified Purchase
Braunbeck is one of my favorite storytellers. I partially read this and partially listened as an audiobook and found what I always do when it comes to Braunbeck's works: make reading the #1 priority in my life. I stop whatever is going on and immerse myself in the story. I use every free second to keep reading and take twice as long as it should to read because

1. I don't want the story to end and
2. I find myself re-reading passages because of just how good Braunbeck is with language, cadence, and emotion.

Prodigal Blues was no exception. It's a tale of humanity, humility, and one of hope. It's also not for the faint of heart. You'll read it and say, "Nothing in life is that cruel, that unjust...that monstrous". And if you're like me, when you find yourself alone in a crowd--at a park, a mall, a subway stop--you'll add, "At least I hope it's not."
Read more
One person found this helpful
Helpful
Report abuse

m.r.fruits
4.0 out of 5 stars Not sure how he did it
Reviewed in the United States on June 1, 2009
Verified Purchase
This is the first thing I have read by Braunbeck, and I have to say I was pleasantly surprised. This sat on my wishlist forever, and I finally broke down and bought it because it was about to go out of print. I honestly expected the book to be sensationalistic trash given its topic, but to the author's credit he managed to tell the story in as sensitive a way as one possibley could. I am super impressed that he managed to pull that off. It was a fast paced and engaging read. My only real complaint is that I found the narrators ruminations on the power puff girls to be really distracting and out of place. Other than that, it was a good book. I daresay the finest book I've ever seen on the theme of mutilatization and sexual torture of children. How's that for an endorsement?
Read more
2 people found this helpful
Helpful
Report abuse

Melissa
5.0 out of 5 stars Wow...
Reviewed in the United States on January 8, 2014
Verified Purchase
Define page turner that invoked every emotion known to man in myself. Awesome...would read again and again. I am already searching for more books by this author.
Read more
Helpful
Report abuse
See all reviews

R T Twinem
5.0 out of 5 stars Brilliant touching horror/crime story "spoilers"
Reviewed in the United Kingdom on July 22, 2012
Verified Purchase
I loved it! Not often do I read a horror/crime (I suppose it cuts across the two genres) story that is emotionally powerful and uplifting yet with an ultimately sad conclusion.Mark Sieber's world is turned upside down when he is seemingly captured by a group of kids ranging in age from 12-19. As the story unfolds Mark has a mission to deliver the kids back to their parents and kill the perpetrator "Grendel" who should inflict such horror pain and mutilation on those so innocent. The reader is with Mark all the way from the emotional reunion of those longs lost kids with their parents...to the killing of Grendel..and the destiny that falls the scarred and emotionally injured Christopher. The writing is very powerful and one scene in particular had me on the edge of my seat...Christopher and Mark are travelling in the van and Christopher is explaining to Mark how Grendel has managed to destroy all their lives...as he talks the speed of the van increases from 50...to...60...up to 100 miles per hour. At this point I could feel the tension as if lifted off the pages of the book and entered my mind it was one stand out moment amongst many in this tour de force story. This is my first Gary Braunbeck book and most certainly not my last, it has been a great introduction into the mind of a first class author, and I look forward to reading many more of his books in the weeks to come..I highly recommend!
Read more
One person found this helpful
Report abuse
See all reviews
Back to top
Get to Know Us
Make Money with Us
Amazon Payment Products
Let Us Help You
EnglishChoose a language for shopping. United StatesChoose a country/region for shopping.
© 1996-2021, Amazon.com, Inc. or its affiliates