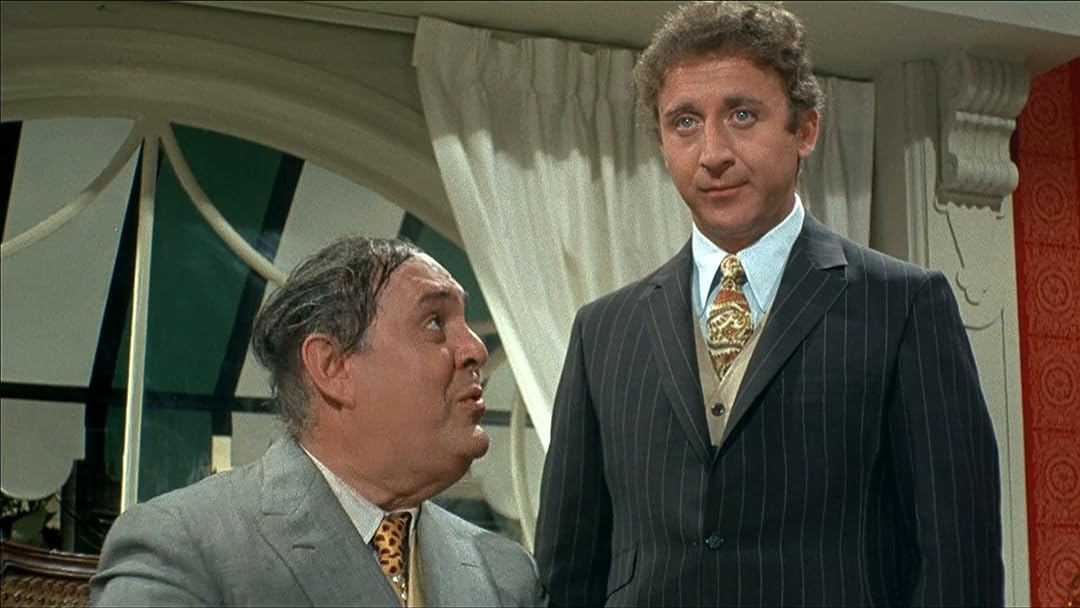 (2,899)
7.51 h 24 min1968PG
Max Bialystock is a washed up Broadway producer who has fallen on hard times. Enter his nervous accountant, Leo Bloom, who makes him realize they could make more money with a flop than a hit…

Annie Van AukenReviewed in the United States on April 15, 2014
5.0 out of 5 stars
A movie about a tasteless musical, and a great musical adapted to film
Verified purchase
The Broadway musical [[ASIN:B00004U0QI GUYS AND DOLLS]] is based on two Damon Runyan stories, ""The Idyll of Miss Sarah Brown" and "Blood Pressure." It also borrows characters and elements of his "Pick the Winner." The hit stageshow had 1200 performances in first run and won a Best Musical Tony.

GUYS AND DOLLS is the story of Nathan Detroit's (Frank Sinatra) dispossessed floating crapgame and his G-note "sucker bet" that Sky Masterson (Marlon Brando) won't be able to convince missionary Sgt. Sarah Brown (Jean Simmns) to accompany him to Havana. If Nathan wins, he's richer by a grand and can pay a garage owner for the use of his storeroom.

If he loses the wager, Sister Sara will be out of town and the game can float right into her mission. Either way Detroit stands to win, if not for his longtime girlfriend, Miss Adelaide. She made Nathan swear to give up gambling, a vow he has no more intention of keeping than he does a 14 year promise to marry the showgirl. Meanwhile, dapper Sky tries all he can to ingratiate himself with straitlaced Sister Sara, but he doesn't seem to be making any progress.

.
In THE PRODUCERS (1968), Mel Brooks has a cameo as an auditioner decked out in a WWI-era German uniform, complete with spiked helmet. His nifty rendition of "Have You Ever Heard the German Band?" is cut interrupted by a loud "THANK YOU!" Here's what he sings before being cut off:

FILM SYNOPSIS--
Once-successful Broadway producer Max Bialystock (Zero Mostel) convinces mousy accountant Leo Bloom (Gene Wilder) to go in with him on a scheme to defraud investors out of a million dollars. All that's necessary is to find the worst possible script, director and cast, and Bialystock & Bloom's new play will close on opening night, then they'll exts stage south to Rio de Janiero.

"Springtime For Hitler," by kooky ex-Reichsman Franz Liebkind (Kenneth Mars) is the perfect vehicle, fey crossdressing director Roger De Bris (Christopher Hewlitt) seems most likely to fail and a company headed by spaced out Lorenzo St. DuBois aka L.S.D (Dick Shawn) won't be a smash, but a smash-up. The only hitch: an opening night crowd LOVES the show-- it'll play for years! As Leo lists the dozens of backers invested at 50% or more, Max wonders: WHAT WENT RIGHT?

"The Producers" is truly a comedy classic, with an outstanding cast and THE MOST outrageous chorus line theme song you will ever, ever see. Very highest recommendation for a movie that will "run for years," and to Mssrs. Bialystock & Bloom: worse luck NEXT time, boys!

Matt Hourihan JrReviewed in the United States on December 1, 2022
5.0 out of 5 stars
Was a gift...
Verified purchase
Funny movie, great cast...

Dan MenteReviewed in the United States on October 20, 2022
5.0 out of 5 stars
Great movie
Verified purchase
Mel Brooks is the best.

James FenosReviewed in the United States on July 26, 2022
4.0 out of 5 stars
Visually Stunning , Audio Lacking
Verified purchase
I was thrilled, THRILLED when I discovered this was finally released on blu ray and the picture is stunning, the 5.1 soundtrack unfortunately is very quiet. Had the same attention given to the video be given to the audio this reissue would be absolutely perfect.

Dee SmedReviewed in the United States on September 25, 2022
5.0 out of 5 stars
WHO CAN TOP THIS CAST?
Verified purchase
Zero Mostel & Gene Wilder are seriously the best!

earthshipmamaReviewed in the United States on July 24, 2020
4.0 out of 5 stars
You think it could never happen here: A subtle message
Verified purchase
Sure, Mel Brooks is a master. I'll admit it bc this movie is an example of a message " hidden in plain sight". "It could never happen here", the audience thinks. It is funny and cute to watch a boho-hippie portraying Hitler. That makes it an easier pill to swallow. But if you look at the lyrics of the songs in the musical's song, "Springtime for Hitler", you can see a much deeper darker theme here. Yes, there is definitely a "master race" who would attempt to control the masses with goosestep /lockstep. Look around and see the predictive programming. This movie is set in a time of the late 60's: sex drugs, rock and roll. The costumes and mood are at once clever and palpable. But it does not change the fact that the plot of the money making scheme of the directors is based on (drum roll) a ponzi scheme. Oh wait, that's illegal, we've seen people imprisoned for that. It could be compared to printing money out of thin air, getting investors but counting on losing the whole time. Of course, the schemers plan on getting out before being held responsible for the crime. Of course, these guys did wind up in jail for a time, but they were absolved bc "without us, there's no show". The Producers only did what they do, "if you ain't cheating, you ain't winning." The audience allows itself to be mesmerized by the "show", which had it been presented in it's true light, would have definitely been a disgusting dud. Nobody "decent" would find anything to laugh about when it comes to atrocities perpetrated by a dictator upon other humans. Entertainment trumped conscience, and therefore, the audience is also culpable. But if we allow our need to be entertained to override our sense of decency, then we also must "pardon" the piper, because we danced to his tune.
5 people found this helpful

Barbara L. PinzkaReviewed in the United States on August 22, 2006
5.0 out of 5 stars
A classic scam comedy; one of the all-time bests
Verified purchase
(Please read the listing for plot details) What makes The Producers unquestionably one of the funniest movies of all time* -- many of which involve a caper of some sort -- is the brilliance of the casting - Zero Mostel's (may he RIP) ability to be cunning, adorable and wanton seemingly all at the same time; the then newly-discovered Gene Wilder demonstrating his brilliant, quavering voice and rubber face of a thousand and one imploring looks; and a strong supporting cast, led by a troupe of elderly ladies who could have held off Patton, bizarrely-outfitted showgirls shipped intact from burlesque and the limpest wrists in the Village.

Add Mel Brooks' completely irreverent script, describing the venality of the theater biz and the seldom-discussed "lighter side" of the Nazi movement (the infamous "Springtime for Hitler") and there's fun for all (well -- not all -- I'd exclude kids under 12, perhaps).

One matter that seems inexplicable is Brooks' reluctance to add any extras to the newly-released DVD versions of The Producers. I guess he believes he's put it on the screen, and "Tthhaat's alll, folks!!" Of course, in recent years he's been very busy with the musical and subsequent film, as well as attending to the tragic, final illness of his late wife, the brilliant Anne Bancroft, so perhaps more will come at a later date.

I should also add that the movie ending differs from that of the current popular Broadway show, -- so beware of friends bearing spoilers.

As much as I enjoyed the Broadway production, you'll find that it's basically a prettified version of the movie with dancing and more songs, and despite the considerable talents of Nathan Lane and Matthew Broderick, they pale somewhat beside Mostel and Wilder. It may be hard to believe, but Mostel had a subtle side, which he could use to great success when appropriate, and Nathan lane is still finding that part of his range. Actually, I was quite disappointed that the musical followed the movie so slavishly 95% of the time, to the musical's detriment, I think, given that so many people are (or should be) familiar with the movie.

The movie suffers in only one way: As was common in those times, Brooks edited the film to allow for audience laughter in the theater so the next comedic line wouldn't be stepped upon. This means seemingly inexplicable pauses dot the film and tend to make it drag a bit, no pun intended (Blazing Saddles also has this quirk/problem). If you're watching with a group of friends, this won't be noticeable.

*Along with Some Like It Hot, The Lavendar Hill Mob, Blazing Saddles, The Pink Panther, et al.
One person found this helpful
See all reviews
Back to top
Get to Know Us
Make Money with Us
Amazon Payment Products
Let Us Help You
EnglishChoose a language for shopping. United StatesChoose a country/region for shopping.
© 1996-2022, Amazon.com, Inc. or its affiliates