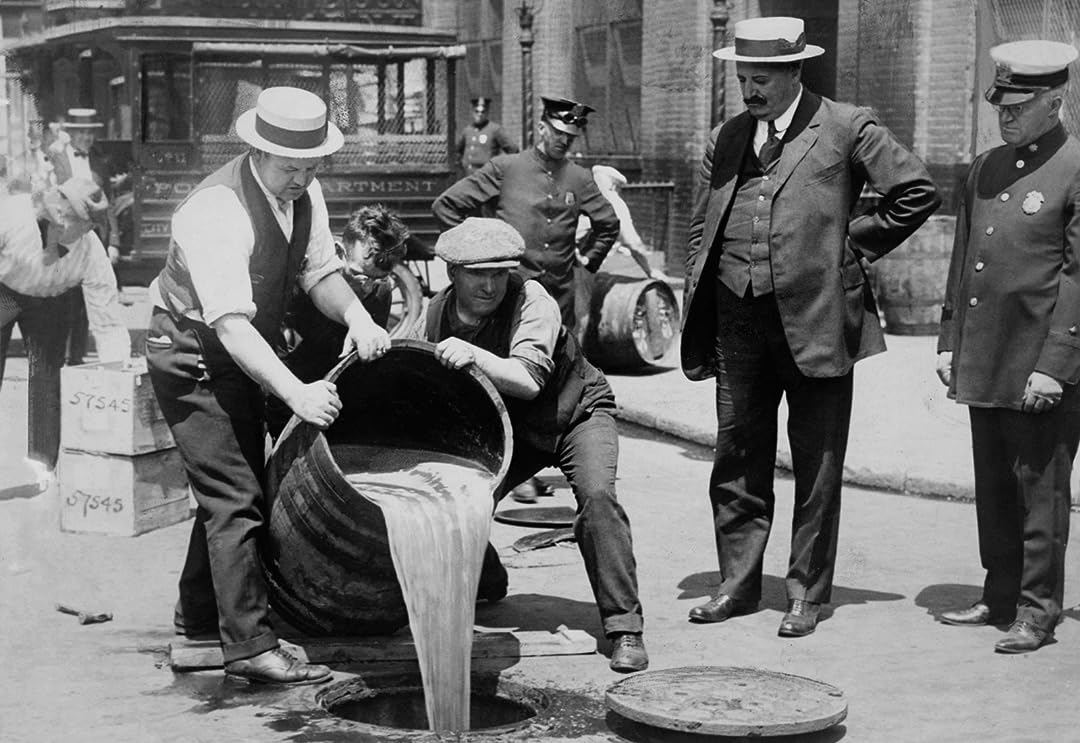 Prohibition: A Film by Ken Burns and Lynn Novick

Season 1
(644)8.22011TV-PG
Experience the rise, rule and fall of the 18th Amendment to the U.S. Constitution in Ken Burns and Lynn Novick's PROHIBITION.

Watch with PBS Documentaries
Start your subscription
Add to
Watchlist
By ordering or viewing, you agree to our Terms. Sold by Amazon.com Services LLC.
Write review

ConsuelaReviewed in the United States on April 8, 2017
5.0 out of 5 starsIf the good Lord from the Beginning
Verified purchase
Wow! This was very well done and extremely informative. The history of Prohibition and its consequences are something each American should look at because the effects of it are the effects of many of our political choices even today. The issues may not be the same, that is, the issues of today may not be about alcohol but rather about some other entity that takes away our rights to choose for ourselves, but the underlying factor is the same--don't let a nation decide for you how to live your life. If the good Lord from the Beginning, gave us that fruit of the Tree of Knowledge of Good and Evil then He meant for us to determine in this life what works and what doesn't work for us, to learn for ourselves what to embrace and what not to embrace for our own mortal and spiritual welfare. You cannot appreciate fire if you don't touch the hot stove once. To allow a government to determine what is good for us and what is not in circumstances where we should be allowed to decide of ourselves is treason against our own rights as human beings. This 3 part series lays out in chronological order with facts to back up what was going on in the nation between 1920 and 1933 a lesson that we would all be wise to learn. Most of us did not live during those years but, nonetheless, with many criminal elements proliferating and murdering myriads of others over presently illegal substances and other things that the government wants to regulate and the politicians of that day and this day being much the same (a few good ones while most are hypocrites) then we would be wise to study the history and interactions of other citizens from the past to help us in our decison making as a people and a nation in what we face today. I can see such a series being made 40-60 years in the future about our time and what might be said about us and our passions about our freedom and what effect it will have had on future generations of Americans. I amazed by how much effect Prohibition had on everything from gender rolls to politics to education.. Very eye opening. Thank you, Amazon, for having it as part of Prime!
7 people found this helpful
Report abuse

PhinsapReviewed in the United States on February 6, 2017
5.0 out of 5 starsNormally Prohibition documentaries are beautiful old cars
Verified purchase
First rate. Normally Prohibition documentaries are beautiful old cars,Thompson machine guns and Al Capone. Burns and company dug deeper presenting hopes and fears of common folks, the interplay of international events that aided passage of the 18th Amendment then the accumulated baggage of failures that collided with the Great Depression that lead to its repeal. Interesting cast of character including Daniel Okrent, author of Last Call that the series was based on and Pete Hamill. Growing up in a small Protestant Texas village the name Al Smith was rarely heard but always in a deriding manner. Come to find out he was a stand up guy with principals and wonderful humor. So much have I learned
2 people found this helpful
Report abuse

Shelley JeltemaReviewed in the United States on July 4, 2012
5.0 out of 5 starsGreat as Always
Verified purchase
The only thing that is missing in this series is more mention of the other "Great Reforms" that were happening across the country. The opening of new territories, homesteading, Indian Wars, the start of the environmental movement and the battle between conservationists and preservationists. Many of the Temperance women were also key players in the push for environmental reform and had great success with using their roles as keeper of the home and protector of life to make improvements like public sewers, garbage removal, and safe drinking water. The feeling was that America had lost her way from what was envisioned by the Puritan settlers and that vision needed to be brought back alive.

We can also see the same tactics being used over and over to legislate morality today. But my favourite part was the movie telling the horrors of alcohol. This script appears to get dusted off and updated when Reefer Madness came out decades later. We hear a similar tune today that we cannot legalize minor drugs because it will cause the nation to go drug crazy.

Jonathan KelleyReviewed in the United States on May 9, 2012
5.0 out of 5 starsFantastically interesting and highly educational
Verified purchase
In Episode 1 alone of "Prohibition" I've learned more about the 16th (income tax), 18th (prohibition), and 19th (women's suffrage) amendments than I ever did in 13 years of lower education. Fantastically interesting story of the history of the United States at the turn of the century, religion, immigration, women's rights, domestic violence, politics, and, of course, alcohol!

There's always more to a story than just a couple details. The concept of prohibition always seemed stupid to me. Episode 1 thoroughly explained the reasoning and rationale behind the temperance movement, something sorely lacking in my previous exposure to its history (other than "alcohol is bad, mmmkay?") Likewise, it also explores the culture of the time, why alcohol was important, and what people valued it.

One thing I watch for in documentaries is political bias. While I'm certain this, like all others, has some bias, I felt it did a good job at showing all sides, from the brewers to the religious institutions, and from the immigrants to the politicians, there was a good picture of the climate of the time.

Finally, and purely aesthetics, I appreciated all of the period photography and video footage that was included.

meganajjcecReviewed in the United States on April 1, 2013
5.0 out of 5 starsExcellent
Verified purchase
This three part documentary's first disc covers the attitude about alcohol and its use in America since colonial times and the first temperance organizations that eventually evolved enough to sway politicians on both a Federal and State level to write and ratify the 18th amendment.
Then there is a detailed second disc about how things were during Prohibition in many different areas....meaning subjects and not just different geographical attitudes.
Finally, the third disc is about the movement to repeal Prohibition (it took almost 13 years) and how the Great Depression was the catalyst to its eventual repeal.
Although each disc was about 100 minutes long, the program kept my interest throughout and, as always with Ken Burn's documentaries, there were a wealth of photographs and old footage.
I highly recommend this documentary.
Plus, you get over 300 minutes so it is a good value.
Report abuse

Peggy in DCReviewed in the United States on February 24, 2021
5.0 out of 5 starsInsightful, excellent historical presentation MUST SEE
Verified purchase
As always, Ken Burns creates an outstanding, fact based, realistic look at this time in our nation's hidtory.and the disease of alcoholism is honest and forthright. Excellent work as always. Ken Burns does the story telling with empathy and fairnesd.
Report abuse

D ZattauReviewed in the United States on October 28, 2016
5.0 out of 5 starsVery Interesting History Series
Verified purchase
Ken Burns is probably our favorite film maker at the moment, he does such a great job of making what could be a dry and uninteresting subject into a total of six hours of riveting history. Our net is currently moving soooo slow we did not think we'd be able to see the third installment. But we hung in there and did see the whole thing. He uses live interviewees, old film clips and stills and delivers history in a way we wish we had learned it in school.
Report abuse

Ben R. CrenshawReviewed in the United States on February 16, 2016
5.0 out of 5 starsFantastic documentary. Gives valuable and entertaining insights into the ...
Verified purchase
Fantastic documentary. Gives valuable and entertaining insights into the world of the early 20th century. The scholars interviewed are top of the line (Okrent's book "Last Call: The Rise and Fall of Prohibition" is simply phenomenal), and they help give the watcher a sense of the complexity of the temperance and prohibition movements -- not only the admirable desire to see the harmful effects of alcohol consumption curtailed, but the unexpected and negative consequences that arose from prohibition. The sights and sounds are also delightful; this film will transport you back to the roaring 20s, Al Capone's Chicago, and rural life at that time. I cannot but recommend this to everyone.
One person found this helpful
Report abuse
See all reviews
Back to top
Get to Know Us
Make Money with Us
Amazon Payment Products
Let Us Help You
EnglishChoose a language for shopping. United StatesChoose a country/region for shopping.
© 1996-2021, Amazon.com, Inc. or its affiliates