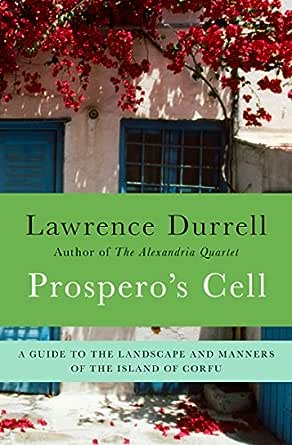 Prospero's Cell: A Guide to the Landscape and Manners of the Island of Corfu Kindle Edition

Flip to back Flip to front
Audible Sample Playing... Paused   You are listening to a sample of the Audible narration for this Kindle book.
Learn more

“In its gem-like miniature quality, [Prospero’s Cell] is among the best books ever written.” —The New York Times
“Corfu . . . could not have found a fitter chronicler than Mr. Durrell. For he is a poet, with all a poet’s sensibility, and a humanist to boot, with a keen eye for character and a scholar’s reverence for antiquity.” —The Daily Telegraph
“[A] charming idyll. . . . The manner of it is as sound as the story is delightful.” —Sunday Times

Born in Jalandhar, British India, in 1912 to Indian-born British colonials, Lawrence Durrell was a critically hailed and beloved novelist, poet, humorist, and travel writer best known for the Alexandria Quartet novels, which were ranked by the Modern Library as among the greatest works of English literature in the twentieth century. A passionate and dedicated writer from an early age, Durrell’s prolific career also included the groundbreaking Avignon Quintet, whose first novel, Monsieur (1974), won the James Tait Black Memorial Prize, and whose third novel, Constance (1982), was nominated for the Booker Prize. He also penned the celebrated travel memoir Bitter Lemons of Cyprus (1957), which won the Duff Cooper Prize. Durrell corresponded with author Henry Miller for forty-five years, and Miller influenced much of his early work, including a provocative and controversial novel, The Black Book (1938). Durrell died in France in 1990.

LJ's reviewer called this volume, which is a guide to the isle of Corfu and other Greek landscapes, "somewhat difficult to define-some travel, some history, some real characters, living and dead, some saints and sinners." Durrell's account nonetheless is "sensitive, nostalgic, and yet surprisingly factual" (LJ 12/15/60).
Copyright 1996 Reed Business Information, Inc. --This text refers to an out of print or unavailable edition of this title.
Read more

3.9 out of 5 stars
3.9 out of 5
31 customer ratings
How does Amazon calculate star ratings?
Amazon calculates a product’s star ratings based on a machine learned model instead of a raw data average. The model takes into account factors including the age of a rating, whether the ratings are from verified purchasers, and factors that establish reviewer trustworthiness.
Top reviews

GTC
5.0 out of 5 stars Nice addendum to "The Durrells in Corfu" on PBS
Reviewed in the United States on July 4, 2019
Verified Purchase
Lawrence Durrell's PROSPERO'S CELL provides further insights about Corfu in the late 1930s to Gerald Durrell's terrific books about their families experiences as adapted by the PBS series, though in this book Lawrence is married to his first wife and there is little reference to the other family members, though Theodore and Spiro share some of his remembrances. Beautifully written.
Read more
2 people found this helpful
Helpful
Comment Report abuse

tp
5.0 out of 5 stars Greek but with Venetian & British History not Ottoman
Reviewed in the United States on May 9, 2019
Verified Purchase
Makes for a more nuanced understanding of what makes up Modern Greece. Worth reading for both travelers and those who like to understand how geography, history, and culture intermingle.
Read more
One person found this helpful
Helpful
Comment Report abuse

bayou grandma
5.0 out of 5 stars My Idea of a Golden Oldie
Reviewed in the United States on June 19, 2013
Verified Purchase
I had a copy of this book for years, loaned to someone somewhere, and Poof! - gone. So now I have another copy which is going nowhere. I am a Durrell fan, of both Lawrence and Gerald for different reasons, and this one is just about perfect. It was lots of fun to read this one again, then re-read Gerald's book about the same period in the Durrell family's lives and compare their different outlooks.
Read more
12 people found this helpful
Helpful
Comment Report abuse

Alan Filipski
1.0 out of 5 stars A Mess.
Reviewed in the United States on August 18, 2019
Verified Purchase
This book is a jumbled, confusing, mess, like random notes thrown together.
Read more
Helpful
Comment Report abuse

Tech Tiger
4.0 out of 5 stars Four Stars
Reviewed in the United States on January 22, 2017
Verified Purchase
Durrell is always a delight for his style, but this is just a beautiful memoir.
Read more
3 people found this helpful
Helpful
Comment Report abuse

Autumn Sun
5.0 out of 5 stars Pure poetry
Reviewed in the United States on February 21, 2011
Verified Purchase
The subtitle to this book is misleading: it is not a travel guide but a memoir in the best sense of the word. Lawrence Durrell's remembrances of pre-WWII Corfu are pure poetry and ache with nostalgia.
Read more
6 people found this helpful
Helpful
Comment Report abuse

Patricia Norris
5.0 out of 5 stars You can't beat the Durrells when it comes to writing
Reviewed in Canada on August 31, 2013
Verified Purchase
Beautiful writing about the end of an era. I bought this because I knew I would enjoy anything that Lawrence Durrell wrote.
Read more
Helpful
Sending feedback...
Thank you for your feedback.
Sorry, we failed to record your vote. Please try again
Report abuse

Jeremy
5.0 out of 5 stars Brilliant
Reviewed in the United Kingdom on July 13, 2013
Verified Purchase
I have wanted this book for so long and what a surprise! Simply fantastic and in very good condition, will have to move on to the next one now.
Read more
One person found this helpful
Helpful
Sending feedback...
Thank you for your feedback.
Sorry, we failed to record your vote. Please try again
Report abuse