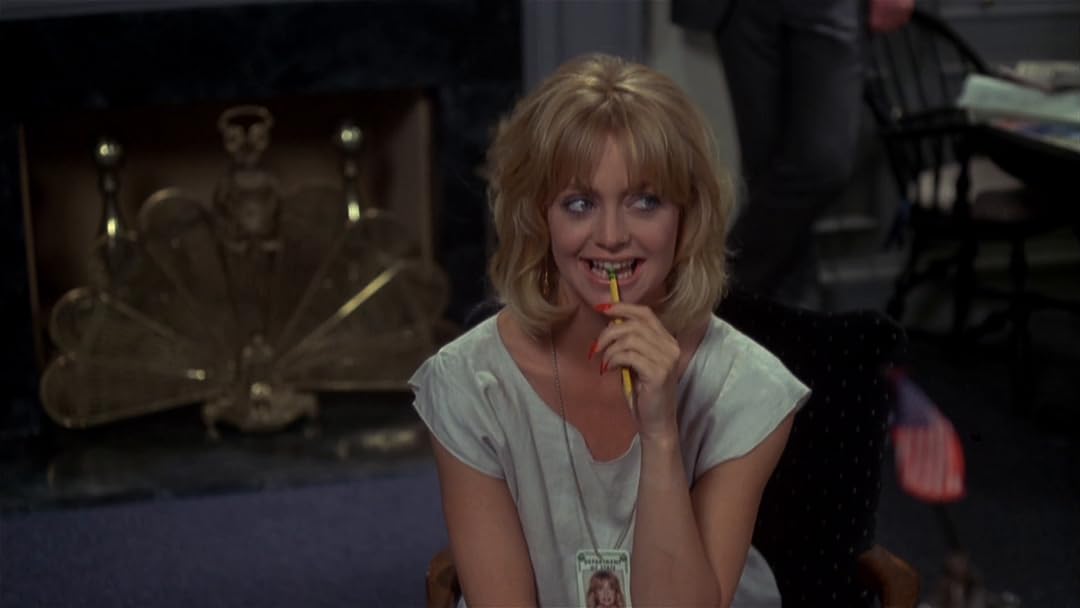 (1,068)
5.51 h 35 min1984PG
Superstar Goldie Hawn is a spirited DC cocktail waitress who, through a series of comic misadventures, becomes an overnight celebrity as a protocol official for the State Department.

Raisuli the MagnificentReviewed in the United States on February 26, 2018
4.0 out of 5 stars
Kind of a fun film.
Verified purchase
Well shot, well acted, factually incorrect here and there, this film is fairly decent from when I remember seeing it all those years ago. Seeing a hidef transfer via a stream from Amazon really helps accentuate the solid visuals used in this film.

Hawn, the "girl with short blonde hair" plays the object of romantic interest for a Calif of some non-descript Middle Easter (Arabic) nation, like a Yeman or Oman, and sets his heart on someone who seems right for him.

The film is somewhat cliché, and by that I mean some of the visual montages used to sell the idea that Hawn's character is a national sensation, to me, don't really ring as being true. But then again, that's kind of what movies are for, but even so a little more plot explanation, I think, was needed to help bolster her character's success to better explain the troubles that result from that success.

Either way it's a fun little film, even if implausible (even for a romcom). It has a lot of funny parts, and it might have been more than what it already is. See it once.

Butterflymom54Reviewed in the United States on July 28, 2020
3.0 out of 5 stars
Stupid premise Goldie Hawn special
Verified purchase
A crazy ride down looney toon street as Goldie plays a women with more sense than the elite think. As usual the government is portrayed as stupid, manipulative and deceptive. There are however many different and diverse characters that are likable and lovable. This movie, I think was made by drunk people and directed to drunk people.
Goldie Hawn was as always funny, lovable and cute in this though. Enjoy!

JencReviewed in the United States on April 9, 2021
5.0 out of 5 stars
One of her best comedies
Verified purchase
I love this movie and am thrilled it was available for digital purchase. Love Goldie - one of the best female comedians of all time and this movie really hits the spot when you need a good laugh.
One person found this helpful

Merritt CordrayReviewed in the United States on January 14, 2021
4.0 out of 5 stars
DVD in decent condition; case badly broken.
Verified purchase
Product arrived a day early. The DVD has more scratches on it than I expected from the condition report, but it plays perfectly well, so no deduction for that. The case, however, has most of the teeth securing the DVD broken off, so it just rattles around inside the case.

FloweringplumReviewed in the United States on August 24, 2013
5.0 out of 5 stars
Double the Pleasure, Double the fun!
Verified purchase
These two films are comedies that are timeless and that I wanted to include in my collection of movies. I am not one to purchase many comedies as I feel many of the storylines do not holdup overtime and keep me entertained with laughter. The performances of Goldie Hawn and the supporting cast members are what makes me see this movie at least once per year. The common link between these two films are the perspective of a young, less than worldly, single female trying to find herself in the military and to succeed in a position of responsibility without the tools that most of the people around her try to use to their advantage for advancement and recognition. Goldie does a good job of having the viewer see her project the funny side of how to handle a difficult situation and than in the end coming out on top.

If you prefer crush, kill, and destroy than this is not the film for you!
3 people found this helpful

Kindle CustomerReviewed in the United States on August 11, 2002
3.0 out of 5 stars
Mr. President (Have Pity on the Working Man)
Verified purchase
The 1984 movie Protocol comes from the school of political films such as Guarding Tess and Dave. These films all strip Washington politics to the bare bones and allow gentle satire and wit to rub elbows with the American political machine.
As a comedy, Protocol does have its moments, though Dave garners the most laughs. As a demonstration of pure acting ability, stick with Guarding Tess. Why then should someone plunk hard-earned bucks down on a movie such as Protocol?
Goldie Hawn is a cultural icon and gives any movie she appears in some basic worth. Buck Henry, who is known for early Saturday Night Live appearances, directing Heaven Can Wait, and the screenplay for the Owl and the Pussycat, wrote the screenplay for Protocol. Herbert Ross, who directed The Goodbye Girl, sits in the director's chair. Most importantly, those who fondly remember any of the above mentioned names will appreciate the blast from the past that Protocol represents.
Without giving away too much of the film's surprises, Goldie plays a ditzy character who finds herself doing the right thing at the wrong time. In this particular case, she inadvertently saves the life of a visiting Arab political figure. Apparent gratitude from the U.S. government eventually lands Hawn's character a position on the White House's protocol team. There, Goldie finds herself to be basically a pawn. In her own abnormal fashion, Goldie proves that pawns can, in fact, win the game.
One special historical note is brought forth through viewing Protocol in a post-Sept. 11th world. Hollywood's portrayal of Arabs has uniquely changed during the years since Protocol originally played in theaters across America.
5 people found this helpful

SLynnRReviewed in the United States on December 30, 2021
5.0 out of 5 stars
Goldie Hawn is adorable 😍
Verified purchase
Who doesn't like silly 80's comedy! I love the way Goldie accidentally makes her way into government affairs...affair is the key word here. Chris Saradon is also charming as her romantic interest.

Hilary.."My Two Cents"Reviewed in the United States on June 25, 2018
4.0 out of 5 stars
Ok movie
Verified purchase
I decided to catch up on all thr great 80s movies from my childhood. Really wish i could've bought this on blu ray but seems like the good ones never are. This movie is just okay. Seems like old times is a far superior movie than this one...by far! With that said...this is a movie you can watch but not one you are dying to see once a month. It was worth the used price but definitely not worth 22 bucks on dvd!
See all reviews
Back to top
Get to Know Us
Make Money with Us
Amazon Payment Products
Let Us Help You
EnglishChoose a language for shopping. United StatesChoose a country/region for shopping.
© 1996-2022, Amazon.com, Inc. or its affiliates