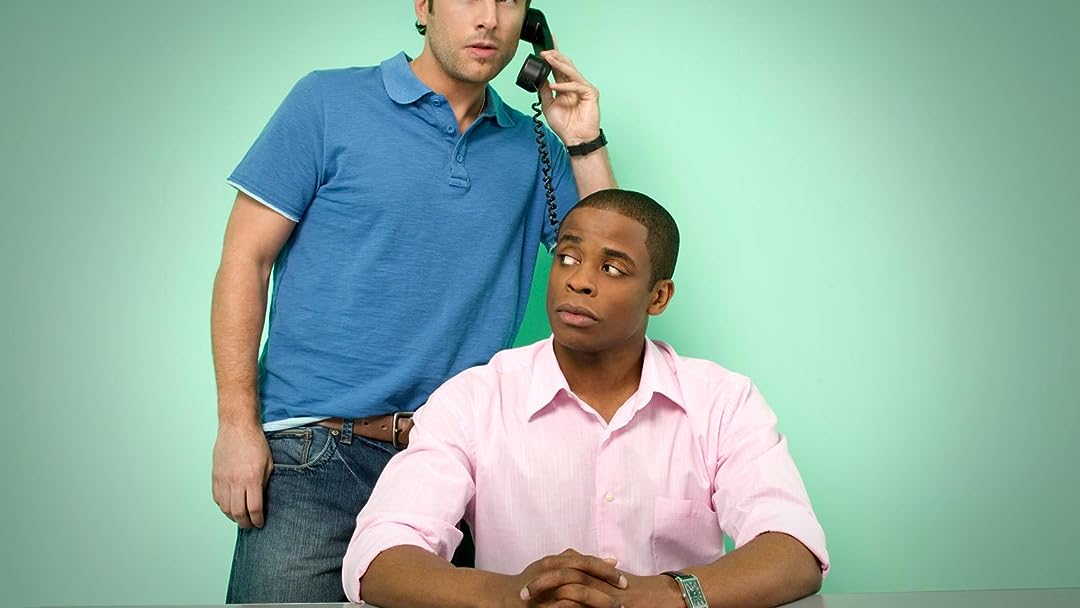 (853)
8.42009X-Ray13+
A quick-witted drama, PSYCH follow the adventures of young police consultant, Shawn Spencer, who solves crimes with powers of observation so acute the precinct detectives think he's psychic - at least that's what he lets them believe. Spencer is joined by his best friend and reluctant sidekick, Gus, and his disapproving father, who ironically was the one who honed his son's "observation" skills as a child. In the premiere episode we meet Shawn's mother, Madeleine, played by Golden Globe winner and Emmy-nominated TV legend Cybill Shepherd. Madeleine, a criminal psychologist, returns to Santa Barbara to help the SBPD with a case much to the surprise of her son and ex-husband, Henry. We also see the Spencer family focus with the dysfunction of Madeleine and Henry's divorce as Shawn deals with the two of them back in his life. The PSYCH agency is on the case of a ghost in the home of Gus' boss.

carolReviewed in the United States on May 17, 2010
5.0 out of 5 stars
Clever and fun
Verified purchase
The show's snappy fun writing, and a fantastic cast have completed another great season with some of my favorite episodes yet. The third season has more "theme" type shows: a high school reunion gives a chance to use many John Hughes references in "Murder?...Anyone?", a re-opened case from the 70's gets the team rolling like Starsky and Hutch in "Disco Didn't Die. It Was Murdered," "Gus Walks Into a Bank" turns the bank-hostage plot on its head and "The Greatest Adventure in the History of Basic Cable" is like watching Indiana Jones' con-man brother. I love the video commentaries--obviously the people involved in the show have great chemistry.

If you haven't yet given Psych a try, there's no need to start at the first season, although eventually you will want them all. Its basic premise is a crime-fighting duo, using trumped-up psychic powers. It avoids the CSI/L&O-type violent, freakish or scary murders, the death is almost gently treated and the directors never emphasize the gory details.

I really have only three quibbles with the show. One, although there are podcast commentaries on some episodes, the sound quality is terrible. I have to turn up the volume almost full, which leaves show quality earblastingly loud. More significant, the problems of the Canadian location are starting to become more evident. There are very few blindingly sunny days when they are outside, although there are many overcast ones. Their breath steaming in cold air in "Murder?...Anyone?" was a dead giveaway we weren't in SoCal anymore. There is also noticeable lack of diversity in general casting. I've lived in Southern California, and it rarely looks as white as their background casting is (beach scenes, restaurants, bank scenes). But those are small details when compared to the overall acting, writing, and feel of the production. It's worth everything I paid and more.

RRReviewed in the United States on February 15, 2015
5.0 out of 5 stars
"Gus, don't be a ..."
Verified purchase
If you're sick of grim, self-consciously bleak crime shows, Psych is the perfect antidote! It's an unashamedly comedic mystery with just enough splashes of reality to keep it grounded.

Shawn and Gus are best friends who genuinely adore each other underneath the constant teasing and banter, and their friendship----along with Shawn's complex but increasingly stable relationship with his dad---give the show its subtle but strong heart. You have to be in the mood to laugh at the show's gleefully goofy silliness, but there's also some surprisingly smart, sharp wit here as well.

Season 2 is my favorite of the whole series (and one of my favorite seasons of any TV show ever!), but this third season is a close runner up. Highlights include The Greatest Adventure in the History of Basic Cable, a 'treasure hunt' episode which features Shawn's amusingly unreliable Uncle Jack; There Might Be Blood, where we get a little much-needed focus on the chief by meeting her sister, fabulously played by Jane Lynch; Lassie Did a Bad, Bad Thing (I'm a sucker for whenever Shawn and Lassie put aside their usual animosity to help each other out!); Any Given Friday Night at 10pm/ 9pm Central (if you like football---or maybe even more if you don't---you'll enjoy this one!); and Tuesday the 17th, which, as others have pointed out, is a terrific takeoff of Friday the 13th---funny, clever, engaging, action packed and at points even genuinely, effectively creepy. That last one alone is worth the currently very reasonable price of this DVD!

You can watch this infectiously energetic, highly amusing show over and over without tiring of it, and it's almost guaranteed to boost your mood. Plus, some of the mysteries are generally engaging, which is more than I can say for many of today's self-serious crime dramas! Enjoy!
43 people found this helpful

HeidiReviewed in the United States on December 14, 2021
5.0 out of 5 stars
This is our favorite show!
Verified purchase
My husband and I have binged this whole series together several times. When I bought this for him as an anniversary gift, I hid each individual box set somewhere in the house with a pineapple all over the house and the yard. I told him to “go find the pineapples!” He LOVED it! That was several years ago, and it’s still in the Blu-ray player. We were watching it last night. Haha! Highly recommended!!

Steven HReviewed in the United States on February 10, 2010
4.0 out of 5 stars
"I Like Soup I Won't Appologize For That"
Verified purchase
This season had its ups and downs. The middle of the season struggled to find it's footing, as the cases seemed a little too predictable. The comedy also felt a little too setup, and didn't feel natural. The episodes at the beginning and end of the season were much better. These episodes were fresh and had the same comedy that we expect from Psych. The last three episodes of the season were by far the best in the series. They captured the top notch writing and acting of the show. The finale was great as it was a small step towards the suspense element that Psych so often lacks. The last disc is worth the price of this set by its self. The final three episodes involve a serial killer that singles out Shawn, a parody of Friday the 13th, and a man that can't stop lying to save his life. Another good episode is when Lassiter is accused of murder, and he has to turn to Shawn to save him. It really showed the vulnerable side of Lassie.

The constant referances to 80's pop culture is always hilarious. The way that Shawn can referance the most obscure item from that decade is always funny. Shawn and Gus arguing back and forth is top notch comedy as well.

The video quality of this set along with the other USA Network releases is grainy. Why USA shoots in such a low quality fashion is beyond me. Even with the low quality of video I highly recommend this set for fans of the series, or new comers alike.
One person found this helpful

Amazon CustomerReviewed in the United States on August 6, 2020
4.0 out of 5 stars
Good Show
Verified purchase
I liked this season. While Sean's antics can become annoying, the show still has a lot of humor and the rest of the cast saves it. Not deep or thought provoking like some other shows, but good entertainment.
2 people found this helpful

DrueReviewed in the United States on October 27, 2014
4.0 out of 5 stars
One of the best seasons of one of the best TV dramedies in years.
Verified purchase
Another season of the well-written, perfectly cast comedic murder mystery farce that is Psych.

The packaging is decent, nothing special but very sturdy.

The episodes and video/audio quality are great.

My one real issue is the quality of special features. This DVD only has a few cast/crew audio commentaries for the episodes, along with some poor quality audio podcast commentaries. Some episodes have none. While this certainly isn't a requirement, one of the reasons to buy a boxed set instead of buying or streaming digitally is the extra content. This one isn't the best in that regard.

The show itself is great(5*), and what special features are included are quite entertaining on their own. Just don't expect a lot of extra stuff accompanying those great episodes.
3 people found this helpful

DVD WatcherReviewed in the United States on March 27, 2014
5.0 out of 5 stars
very entertaining show
Verified purchase
My sister had told me how much she liked this show. After getting season 1, I got hooked. I bought season 3 before season 2, as it was cheaper at the time. Cybil Sheppherd shows up as Shawn's mother in season 3.

Shawn is actually incredibly observant and sees those little details (think Monk or the Mentalist) the rest of us miss (his father trained him). Shawn pretends to be psychic and helps the police department solve homicides, along with his best friend, Gus (great character).

This DVD DOES have subtitles for the hearing impaired. Also, they talk REALLY fast so it is easy to miss dialog (even with subtitles). Several extras on this DVD set.
Lots of laughs. This is a very entertaining show and I look forward to getting the other seasons.

Katherine WilliamsReviewed in the United States on March 23, 2010
4.0 out of 5 stars
Seriously Awesome!!
Verified purchase
I love this show so much! Everything in this collection shows great detail and attention just like the characters! The bonus features and bloopers are awesome and the product itself very good. The way you open it is a little tricky if you don't have nails! One dvd popped out a lot but its easily secured if you make sure to be careful! Or, what I did is to use the opposite center snap ring that clicks good. There are four discs and when you open the book you open the inner fold to get to disc 3 & 4; on the opposite inside panel of discs 1 & 2 is a better center snap ring to keep them in place. You may have to open it to get at them but I find it useful and no cats or animals can get to them/walk on the discs accidentally!
4 people found this helpful
See all reviews
Back to top
Get to Know Us
Make Money with Us
Amazon Payment Products
Let Us Help You
EnglishChoose a language for shopping. United StatesChoose a country/region for shopping.
© 1996-2022, Amazon.com, Inc. or its affiliates