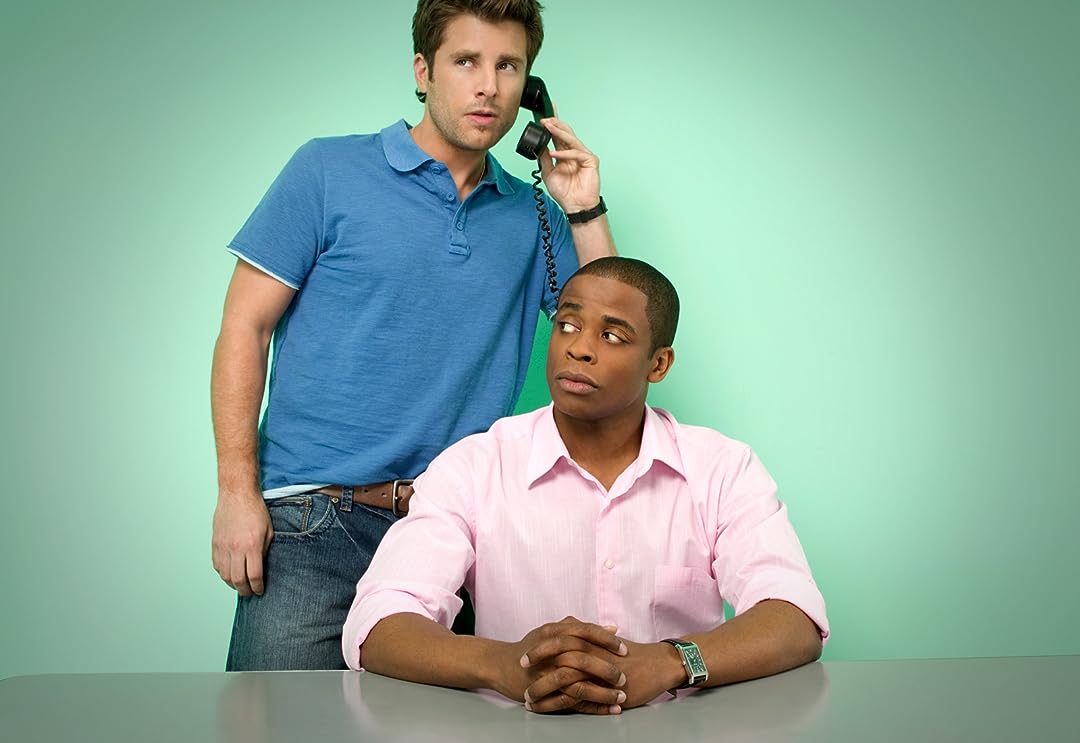 MonicaReviewed in the United States on August 5, 2020
5.0 out of 5 starsHilarious Show, Beloved Duo
Verified purchase
If you've seen any episodes of Psych, you know this is a beautiful tale of an enduring bromance.

If you haven't seen any episodes of Psych, buy them all now and feel the stresses of lockdown melt (mostly) away as you enter a world of pop culture appreciation, brotherly love, brilliant detective work, and the softening of one tightly-wound Head Detective's heart.

Not enough? Okay, then throw in some skeezy William Shatner, a tap-dancing/baseball-catching superhero duo, and some Indiana Jonesin' with Despereaux. Still nothing? Fine, we'll include hijinks when Gus joins a cult, Lassie gets a girlfriend, and Shawn checks into the looney bin.

Still not convinced? Then add some mystery white powder, an explosion-propelled leap into a swimming pool, a murdered donut, a crushed Blueberry, and you've got yourself another sweet season of Psych.

StuiletufugaReviewed in the United States on January 16, 2013
5.0 out of 5 starsReceived BROKEN - but.......I would give 10 STARS (Please continue reading).
Verified purchase
We received our CD package and it was BROKEN and of the 4 CD's, 2 were visibly scratched. So I went online, located this order and filed my complaint - within 15 MINUTES, I received an Email stating they have "reordered" it an not cost. We just need to go to our Amazon Account and "return" the broken merchandise. In the return link - we just had to click "UPS will pick it up from our House" and guess what, UPS knocked on our door 2 days later and retrieved the broken CD Package.

Our NEW CD package was received 3 days after I had filed my complaint on Amazon.com thru my account. PLEASE NOTE: Amazon by far is the standard of efficient and excellent CUSTOMER SERVICE. No where else can you do this without having to call someone or go through hoops to explain something is broken. Wow - I am beyond satisfied - I can do an Amazon Commercial for free just to tell everyone HOW AWESOME THE customer experience is. Just so we are all on the same page, my definition of awesome is as follows:

1) I order something online,
2) I receive it in good order at my House,
3) If not in good order, I go back to my Account online and look for a way to provide feedback that directly tied to the "not in good order" product. AND IT'S THERE ON AMAZON.COM in "Your Orders".
4) I am able to TYPE a summary of my problem and I expect it to be taken cared of (meaning, I do not want to be on the phone to tell someone or ask someone) - simply since I ordered it without speaking to someone. AND IT'S THERE ON AMAZON.COM.
5) That I also have an option to "click" somebody come get this from my House since it is NOT my fault it was broken as it arrived broken. AND YES, AMAZON.COM has that TOO.....seriously (I was beyond shocked but very very HAPPY with Amazon and the options - WOW is all I can say).

In summary, while other online retailers can do maybe a few good things - NONE offer what I just typed above. Thank you Amazon.com - you are the GOLDEN STANDARD for which all companies both Online and Physical should be based or modeled after.
8 people found this helpful
Report abuse

elizabeth hunterReviewed in the United States on December 7, 2020
5.0 out of 5 starsPsychoholic for life
Verified purchase
Psych is my jam. Best underrated show ever. Hilarious well thought out characters, perfect 80's and 90's references, and guest appearances from past pop culture icons. Can.... and do, watch over and over and still finding things I've missed or didn't get before. Perfection.
One person found this helpful
Report abuse

H. BalaReviewed in the United States on January 19, 2013
4.0 out of 5 stars"I, too, am a man of science. See, I'm a psychic."
Verified purchase
I'm a recent convert to PSYCH, and so I've got serious catching up to do. It's Season 6 of the USA Network's currently longest running show. Despite Shawn Spencer's amazing psychic sleuthing act, Santa Barbara, California is still very much crime-infested. And that suits us fine. I'd initially dismissed PSYCH as a series that's too goofy and over-the-top. But I went thru Season 5 and realized that PSYCH does have dramatic flair, that occasional sense of gravity. I'm a sucker for romance so my way in was the game-changing growth in Shawn and Juliet's relationship. Season 6 continues to advance that relationship. I really liked the polygraph test sequence in the opening episode ("Shawn Rescues Darth Vader"). In that sequence, Lassiter has got Shawn strapped to a lie detector and thinks him cornered. Instead we get a wonderful moment with Shawn and an onlooking Juliet.

PSYCH's calling card is its self-aware shamelessness and its wit and its relentless pop culture referencing. Given, I roll my eyes at Shawn's trademark raising of hand to temple as he demonstrates his "psychic" skills. Thankfully, his and Gus's goofing around frequently generates big laughs. (For a few weeks, I was going around, saying "C'mon, son" to everyone.) And just when you think they've wandered too far into silly territory again, here comes the shocking season finale. PSYCH ending on a dark note? You know that's right.

- "Last Night Gus" - PSYCH's nod to THE HANGOVER; After attending a cop's retirement party, Shawn, Gus, Lassie, and SBPD's weirdo coroner Woody Strode wake up with no recollection of what happened the night before.

- "In for a Penny..." - Awesome, awesome Juliet O'Hara-centric episode. William Shatner plays Juliet's estranged con artist dad who's trying to ingratiate himself back into her life. Fantastic emotional beats delivered by Shatner and Maggie Lawson.

- "Neil Simon's Lover's Retreat" - Another great ep. Shawn and Juliet go on a romantic getaway, so naturally a corpse pops up. Keep an eye out for the nightclub sequence as Gus, Lassie, and Henry compete in a bet.

- "Heeeeere's Lassie" - Focus on Det. Carlton Lassiter who hires Shawn and Gus to investigate a possible haunting in his new condo. This episode spoofs THE SHINING, POLTERGEIST, ROSEMARY'S BABY, and even GHOSTBUSTERS. Guest-starring William Shatner who shows up for a few minutes.

PSYCH - THE COMPLETE SIXTH SEASON has its 16 episodes on 4 discs. The bonus stuff:

LydiaReviewed in the United States on September 24, 2017
5.0 out of 5 starsThank-you Amazon. :)
Verified purchase
Amazon has once again gone above and beyond my expectations. I have been searching for this season of Psych for a very long time. I could've saved myself a lot of time if I'd just looked here first. I really enjoy Psych, and this season is no exception. Shawn and Gus and their cohorts continue to deliver lots of laughs and crazy cases even after six seasons. If you haven't tried Psych yet, then I would suggest trying it.
3 people found this helpful
Report abuse

Peter FadenReviewed in the United States on April 21, 2012
5.0 out of 5 starsThe season finale leaves you....shocked actually!
Verified purchase
This episode features the trademark Psych style....somebody you think is guilty only to find out the person really wasnt, some intentional over the top acting and interaction between Shawn and Gus that really makes the show, etc...

You get to see the relationship between Shawn and Juliet really begin to blossom while still staying true to the characters. Lassiter just keeps becoming a better and better character.

So, the basic premise is that Shawn's dad was the lead investigator in what remained an unsolved murder. Flash forward to present day and the body of the person they suspected to have been murdered was found along with the body of the alleged murderer's dad as well. Things get dangerous in this one, and although the murders are solved, the ending begins with Shawn's dad retiring for good as a cop and as a consultant, leaving it all behind in a state of depression...and then the ending happened, and i will just say, it was completely unexpected and the perfect cliffhanger as well. You will think upon it for a while afterwards.

HRH Catherine AnneReviewed in the United States on August 30, 2012
5.0 out of 5 stars5 Star entertainment
Verified purchase
DUDE! Over the history of television, few shows have been able to keep up the momentum season after season, but Psych is consistant in delivering the goods. I have no doubt season 7 will provide the same quality, and same humor and best guest stars out there. This season the 2nd episode, "Late Night Gus" was perfection, I was shrieking and laughing thru the whole show!! Shawn, Gus, Lassie & Woody re-living the night before to reconstruct a crime was fab, but the scene of them walking (swaggering actually) side by side was absolute perfection! And poor Gus & his perfect apartment... fortunately he probbably has nitro glycerine on hand.
Little on tv these days provides the entertainment level Psych brings. If you are a fan, I can add little more to your enthusiasm, if you have never seen this show, start any season and sit back have a rocking good time and be prepared-you will be hooked forever. I hope these guys never grow up. And I hope Henry used his gear,this show never disappoints & Henry is a cop thru & thru so I am execting a stunning first pisode.
One person found this helpful
Report abuse
See all reviews
Back to top
Get to Know Us
Make Money with Us
Amazon Payment Products
Let Us Help You
EnglishChoose a language for shopping. United StatesChoose a country/region for shopping.
© 1996-2021, Amazon.com, Inc. or its affiliates