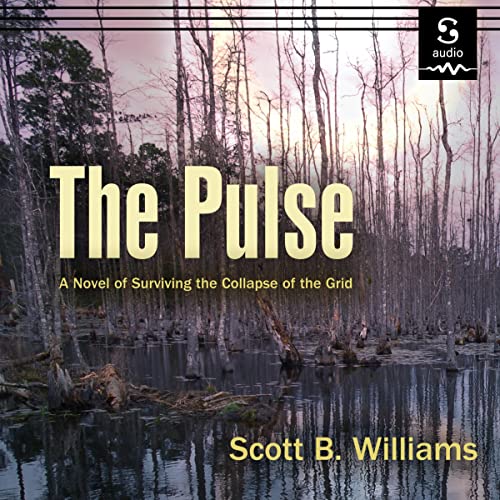 The Pulse: A Novel of Surviving the Collapse of the Grid

Scott B. Williams (Author), Mike Vendetti (Narrator), Scribd Audio (Publisher) & 0 more
4.0 out of 5 stars 278 ratings
See all formats and editions
Sorry, there was a problem loading this page. Try again.

A thrilling narrative of survival amid the violence and chaos following the catastrophic destruction of America's power grid.

As massive solar flares bombard the Earth, an intense electromagnetic pulse brings down America’s long-neglected power grid. The electric age ends and anarchy descends as desperate citizens panic. Artie Drager, whose dream Bahamas vacation turns into every parent’s worst nightmare, finds himself stranded thousands of miles from his home and only daughter, Jessica. As the horrible aftermath unfolds, Jessica is frantic about her father lost somewhere at sea. But first she must save herself right at home. Gangs of looters are raping, creating havoc, and taking everything in sight. Jessica is forced to bug out from the crumbling streets of New Orleans into the desolate and dangerous backwaters of Mississippi while her father sets sail on a trackless ocean a thousand miles away.

This compelling, fast-paced, action-adventure novel has listeners riveted and uneasy, questioning whether they would have what it takes to survive in an America lit only by firelight.

Your audiobook is waiting!
Learn more about membership
List Price: $19.60
You Save: $2.45 (13%)
By completing your purchase, you agree to Audible’s Conditions Of Use
Sold and delivered by Audible, an Amazon company
Share

LocoCoyote
3.0 out of 5 stars A Fun Read, But some flaws
Reviewed in the United States 🇺🇸 on July 8, 2022
Verified Purchase
I am a sucker for post apocalyptic tales. The problem with them is that there are so many and they all follow much the same plot lines. This one is no different in that regard.

What it does differently is to introduce the idea of spending the apocalypse on a sailboat…which is an idea that has intrigued me for years. The author actually gets most of his sailing stuff right (not all, but most).

The ending is disappointing in that you can feel the author wanting to wind things up and we must endure the unlikely and unrealistic coming together of all the different threads in one big convenient meetup. Still, it kept my interest enough to move me on to the next installment.

T. Greene
5.0 out of 5 stars tfgreene3
Reviewed in the United States 🇺🇸 on September 19, 2012
Verified Purchase
This is an excellent book! It's the story of a single father and his college-age daughter, and how they struggle with the problems that arise when the world goes dark in a two-stage electromagnetic event caused by a massive solar storm. The daughter is in New Orleans attending college when it happens, and her father is on what was supposed to be a three-day-long-weekend cruise with his brother in the Caribbean. When the lights go out, the daughter has to get out of New Orleans (she doesn't realize this at first, but a college friend does, and convinces her it's going to quickly get Katrina-ugly if they stay). In the process, she and her friends face some extremely difficult situations that will keep you on the end of your seat. The father is desperately trying to get back to his daughter. He and his brother end up having to sail back the old fashioned way (no artificial power or navigation assistance and no electronic comforts). In the process they face pirates and other bad guys, and experience other difficulties of their own. There is a little bit of unlikely coincidence at the end (I won't spoil the book by describing them), but even that is somewhat believable, and I think you'll forgive the author because you'll like everything else about the book enough to overlook that aspect of it.

The writing is excellent - the author has a writing style that uses everyday language in an interesting, quick-moving, pace. That coupled with an interesting topic and storyline makes for a quick and enjoyable read. You won't get bogged down in the prose. For example, some post-apocalypse stories are written in agonizing detail in order to serve as a survival list masquerading as a story. That isn't this book. This book is a genuinely enjoyable read that moves along at a quick pace.

In addition, you'll love the storyline. The author tells a tale of ordinary people in a difficult situation. They aren't super heroes, they don't always have the answer to the problems they face, and they get side-tracked and victimized (as well as prevail against) the bad situation they find themselves in and the bad people they find themselves facing.

I like the apocalypse genre, so I would probably be relatively easy to please under most circumstances anyway, but ... my kids were even fascinated by the story as I described it to them as I read the book. My daughter (who is definitely NOT interested in the apocalypse scenario) even asked me if she could read it when I was done.
Read more
One person found this helpful
Helpful
Report abuse

Devon
5.0 out of 5 stars "The Pulse ..." a great action filled novel
Reviewed in the United States 🇺🇸 on September 28, 2014
Verified Purchase
Scott B. Williams has written two great books in “The Pulse”, and “Refuge”.

They are Book 1 and Book 2 in a continuing series.

I read more than 100 books a year and have done so for a long time, hence, I feel I know good writing when I see it.

These books have what you want in the post apocalyptic genre .. the SHTF world of writing.

They have great characters that the reader can identify with. Something in the characters for everyone .. strong and hunky male characters with values and morals, strong and attractive female characters, the normal array of loser bad guys, and a wonderful Rastafarian character named Scully .. my personal favorite.

There is also plenty of good solid action so things never get dull.

But the element that I find very special and somewhat unique for this genre, is, the whole nautical element. One could say that the “boat” is in and of itself, also a “character”.

The whole escape to the open ocean and from there to faraway places of safety, tugs at the core of so many of us who care for our families and friends and who want to live a free and safe life.

But first .. before heading out to the open sea to start such a new life, a long voyage by two brothers across the Gulf of Mexico to a ravaged, blacked out, lawless city of New Orleans to rescue two young women, one the daughter of one of the brothers and, of course, the niece of the other, aided mightily by Scully and his Rasta outlook on life and the world.

Also, the tension and action packed escape from New Orleans of the two young women and their mutual male friend .. away towards a hoped for safe place far out in the country, soon after the lights go out from a CME.

Lots of plot twists and turns and unexpected developments .. harrowing escapes .. characters making dumb decisions you the reader can see coming as a bad idea and then, the struggle to get thru them.

Great stuff .. really fun to read .. very enjoyable. You’ll thank me later for steering you towards these two books and then the rest yet to come.

Mr. Williams has written other works, both fiction and non-fiction. I also enjoyed “The Darkness After”, of the same genre as these two great books. Check that one out as well.
Read more
Helpful
Report abuse

Kindle Customer
4.0 out of 5 stars It was Okay
Reviewed in the United States 🇺🇸 on November 5, 2021
Verified Purchase
Very slow story. Characters were realistic, but the reader spends way too much time inside their heads. Dealing with their moralistic struggles bogs the story down so much you have put down to wake up and come back later. Not sure I will ever buy another book by this gentleman.
Read more
3 people found this helpful
Helpful
Report abuse
See all reviews

Gregory
5.0 out of 5 stars Essential.
Reviewed in the United Kingdom 🇬🇧 on January 9, 2017
Verified Purchase
If you're into "apocalypse" novels, you owe it to yourself to try Scott Williams. The whole series is very well written and, unheard of in these circles, very well edited (note that you still "defuse a situation", not "diffuse" but that few mistakes in eight books is a record). This series of four books is centred on a group of sailors escaping a lawless America with most of the action happening on the water and this is a refreshing approach to the issues facing survivors. It is also instructive as Williams is a specialist and you can trust him on anything he says about boats and sailing around the Gulf of Mexico and in the Caribbean. The parallel series The Darkness After is in the same universe but follows a group of teenagers who have taken to the woods instead, with the same amount of realism.
Read more
Report abuse

Jeremy Sadler
3.0 out of 5 stars Nice idea. Seems to be aimed at boy scouts though.
Reviewed in Australia 🇦🇺 on June 20, 2017
Verified Purchase
I was attracted by the sailing stories of the Wharram cat and they are great. I felt the story telling was rather obvious as if aimed at a young audience. And in that it does really well. Nice adventure with clear plot and characters and simple philosophy of good and bad.
Read more
Report abuse

Mr B P Collins
5.0 out of 5 stars Good read
Reviewed in the United Kingdom 🇬🇧 on December 28, 2013
Verified Purchase
Story line follows a very probable happening in our electronic dependant civilization and the certain collapse of our way of life.
Read more
Report abuse
See all reviews