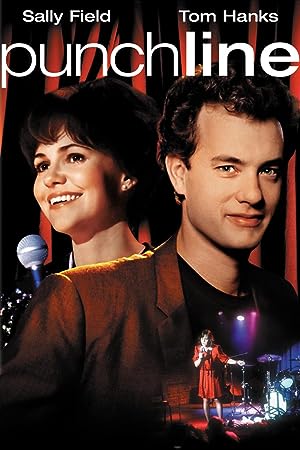 (293)
5.92 h 2 min1988R
PUNCHLINE, the first major release to hit on this subculture of comedy clubs and struggling comedians, is both funny and sad. Sally Field, Tom Hanks and John Goodman star in this wonderful behind-the-scenes look at the world of stand-up comedy...where laughs are serious business.

gkhellandReviewed in the United States on June 8, 2022
5.0 out of 5 stars
Good movie and wonderful acting
Verified purchase
This was a great addition to my Tom Hanks collection of DVDs.
Recommended

Shannon L. YarbroughReviewed in the United States on August 3, 2016
5.0 out of 5 stars
One of Tom and Sally's Best!
Verified purchase
Many years ago I picked up the VHS tape of Punchline in a bargain bin at K-Mart. I fell in love with the movie and it had a huge influence on my decision to eventually try stand-up comedy myself many years later. Since I recently started doing open mics again, I wanted to re-watch it. I have no idea what happened to my VHS tape but thanks to Amazon Video I was able to see it.

Surprisingly, this movie still holds up. Other than how young Tom Hanks looks, the movie doesn’t necessarily have an old 80’s vibe to it. The jokes told in the film aren’t very dated other than one comedian who carries a large boom box on stage. I know the movie inside and out, but I wasn’t bored by it. You get that feeling sometimes when you watch an old movie again and you suddenly realize that you’ve outgrown it or it just doesn’t feel as good as it did back in the day. It wasn’t dated then, but maybe it is now. Not Punchline. Punchline is still funny.

This movie is two hours long unlike most lackluster comedies today that barely clock an hour and a half and sometimes you think that’s too long. Honestly, Punchline feels like one of those movies because it goes by so fast but that’s because it really is funny and relies on true stand up and comedic situations rather that sight gags or lewd humor. And the plot line doesn’t get dragged down by ad libbed humor or unnecessary characters. It’s actually quite simple.

Sally Field plays Lilah, a housewife who is trying to make it as a stand-up comic. Tom Hanks plays Steven, a med school dropout who is a pretty regular on the comedy scene. When the two cross paths at a club called The Gas Station, Lilah asks Steven for some tips and feedback.

Steven is hesitant because he’s got his own problems, and Lilah has to juggle her housewife roll. But she finally commits and so does Steven. What follows is Lilah’s epiphany as she becomes more comfortable on stage and comes alive. There’s a scene where he takes her to a club and won’t let her use her regular jokes and that A-ha! moment is a great scene to watch.

There’s a minor plotline where Steven falls for Lilah, and she almost gives up comedy to make her husband happy. By the way, her husband is played by John Goodman. It’s a small role before he stepped into the role of Dan on the hit show Roseanne, but still a very noteworthy role for him! You’ll hate Steven through most of the movie, maybe even in the very end, but the story lines are wrapped up beautifully.

I doubt this movie would even be made today. It would be considered too long and probably not obscene enough. It’s interesting to see how Hollywood has changed our tastes in humor through the years and Punchline is a perfect example of what “was” funny in the 80’s.

Also, I think this movie would have to turn into a love story to even try to appeal to an older audience because a younger crowd would have no interest in middle-aged stand-up comedy. That’s why I think this movie is a classic just the way it is! If you enjoy good clean humor, Tom Hanks and Sally Field deliver in Punchline!

HWWomanReviewed in the United States on January 2, 2019
4.0 out of 5 stars
Probably about 3.5 stars - interesting look at stand-up comedy and a good cast!
Verified purchase
I am not sure if it's the fault of the actors (probably not), but Tom Hanks' character Stephen is honestly a bit scary and he has a few screws loose. Blame it on his strict father or his sad childhood, but Stephen doesn't have a very good grasp on reality and he harbors quite a bit of anger. Spoiler Alert: When he falls in love almost out of the blue with Sally Fields' character Lilah and then ultimately ends up winning the competition by default because Lilah drops out, all I could think is what's next for this very volatile individual - stardom or a really rocky road or both.
Lilah is a fun and relatively believable character and I was definitely rooting for her. When her husband rallies for her at the competition, it is really endearing. Their daughters are really sweet as well.
All in all, worth viewing if for nothing else than to see what the life as a stand-up comic in seedy clubs looks like.
I love "The Marvelous Mrs. Maisel" for this among other reasons.
2 people found this helpful

Amazon CustomerReviewed in the United States on October 16, 2020
4.0 out of 5 stars
Still a Good Movie
Verified purchase
Holds up today, though I enjoyed it more when it came out 30 years ago.

Yiannis PReviewed in the United States on December 22, 2018
4.0 out of 5 stars
What was the Punchline?
Verified purchase
The characters portrayed by Sally Field, Tom Hanks, and John Goodman, were all interesting and very likeable. But somehow the storyline didn't quite jell, and the ending was partly a mystery, partly a disappointment to me. With the exception of Hanks' routine at the hospital and Sally Field's final performance, all the rest were not impressive in the quality of their jokes.

Bio 101Reviewed in the United States on February 17, 2019
5.0 out of 5 stars
I never knew Tom Hanks could dance!!
Verified purchase
This movie is centered on what it means to be a performer and a comedian, but it is also about what it is to be a woman living in a confining role, about a son forced to live out the dreams of his father, about the courage it takes to believe in a marriage even when it feels like the marriage is tearing you apart. It's story-telling style reminded me of Woody Allen's, but less inward-looking. Great performances by Sally Field, Tom Hanks, and John Goodman. Should have won an Oscar.
2 people found this helpful

shirReviewed in the United States on November 2, 2016
5.0 out of 5 stars
Love this movie, language not for kids
Verified purchase
Wonderful movie! The language is a bit rough so I wouldn't recommend it for kids, but it's great for adults. It's an artistic look into the reasons people love doing stand up comedy, and why we love them. Tom Hanks' character is brilliantly dark. Sally Field and John Goodman are absolutely believable as the married couple struggling to cope with her addiction to performing comedy. My 2 favorite scenes are Tom Hanks' rendition of Gene Kelly's dance in the rain in the classic, 'Singing In The Rain"; and Sally Fields flat out slapstick routine preparing her home and family for a dinner party...the poor black goldfish!
6 people found this helpful
See all reviews
Back to top
Get to Know Us
Make Money with Us
Amazon Payment Products
Let Us Help You
EnglishChoose a language for shopping. United StatesChoose a country/region for shopping.
© 1996-2022, Amazon.com, Inc. or its affiliates