You've subscribed to Team Umizoomi! We will preorder your items within 24 hours of when they become available. When new books are released, we'll charge your default payment method for the lowest price available during the pre-order period.
Update your device or payment method, cancel individual pre-orders or your subscription at
Your Memberships & Subscriptions
There was an error. We were unable to process your subscription due to an error. Please refresh and try again. 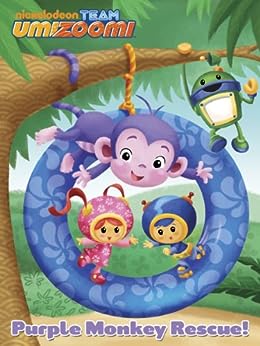 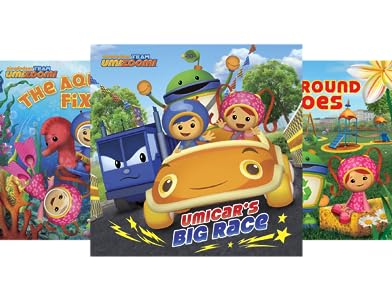 In 1942, the launch of Little Golden Books revolutionized children’s book publishing by making high-quality picture books available at affordable prices. More than 60 years later, many of the original Golden Book titles are still wildly popular, with The Poky Little Puppy topping the list of ten bestselling children’s books of all time. Golden Books’ backlist is teeming with classics such as Dorothy Kunhardt’s Pat the Bunny, and features the stories and artwork of children’s book legends Mary Blair, Margaret Wise Brown, Richard Scarry, Eloise Wilkins, Garth Williams, and many more. Today, the Golden Books imprint includes an array of storybooks, novelty books, and coloring and activity books featuring all of the most popular licenses, including Disney, Nickelodeon, Barbie, Thomas & Friends, The Cat in the Hat, Sesame Street, Marvel Super Heroes, and DC Super Friends. Golden Books continues to reissue the best of its backlist in a variety of formats, including ebooks and apps, as well as bringing out brand-new books in these evolving new formats.

Sue DiCicco is the author-illustrator of many beloved storybooks for children. Born in Southern California, she attended Cal Arts, then worked for Disney and other studios as an animator before opening her own studio. She illustrated the Little Golden Books The Poky Little Puppy's Wonderful Winter Day and The Poky Little Puppy and the Pumpkin Patch as well as Random House's Step into Reading titles The Poky Little Puppy, The Shy LIttle Kitten, Scuffy the Tugboat, The Little Red Caboose, Tootle, Tawny Scrawny LIon, and The Shy Little Kitten's Christmas. She lives in Santa Barbara, California. --This text refers to an out of print or unavailable edition of this title.

4.8 out of 5 stars
4.8 out of 5
111 global ratings
How are ratings calculated?
To calculate the overall star rating and percentage breakdown by star, we don’t use a simple average. Instead, our system considers things like how recent a review is and if the reviewer bought the item on Amazon. It also analyzes reviews to verify trustworthiness.
Top reviews

Katie
5.0 out of 5 stars must have for team umizoomi fan
Reviewed in the United States on March 13, 2015
Verified Purchase
I guess the fact that we've read our LO this story about 18 times in the 5 days since we got the book is a testament to the book.
The book closely follows the purple monkey rescue episode of team umizoomi (except no spider in the book (thankfully))

LO can't get enough of team umizoomi right now so we read it all the time.. She's 31 months.

Wegmej
5.0 out of 5 stars Toddler is in love!
Reviewed in the United States on December 31, 2015
Verified Purchase
I have an Umizoomi-loving child. She goes crazy for Umizoomi and since the show is a bit older, it was really difficult to find umizoomi toys that didn't cost and arm and a leg. These books go along with the episodes and have been great for developing her speech. She is a bit behind on speech but will sit and point out the objects in the book. I really get her talking so this is a major accomplishment for us.
Read more
2 people found this helpful
Helpful
Report abuse

Jeather
4.0 out of 5 stars Do I have to read it again?
Reviewed in the United States on July 8, 2013
Verified Purchase
If you have a little one who loves Umizoomi, then this book needs to be in your library. Both of my boys love to have it read to them - over and over. Like all the Umizoomi books I've seen so far, it is based completely on an episode of the show, so no new material here. Would it kill them to put an original story in their books? That said, my boys don't seem to mind the repetition at all, so it's really my complaint more then theirs.
Read more
3 people found this helpful
Helpful
Report abuse

Reviewer
5.0 out of 5 stars A must buy for fans of the show!
Reviewed in the United States on May 5, 2017
Verified Purchase
For those of you who have little ones who love UmiZoomi, get this book! The story is almost identical to the purple monkey episode. It even uses lines from the show. This makes it a fun read and helps little ones read along! Great book to add to your collection.
Read more
Helpful
Report abuse

Kindle Customer
5.0 out of 5 stars Fun and colorful
Reviewed in the United States on December 28, 2012
Verified Purchase
Golden Book and Team Umizoomi combine to provide a good, fun read for my grandchildren. They love the TV show so of course they enjoyed the book. It's nice to see the little ones looking at a real book instead of watching TV or using a computer. I will continue to buy them books in hopes they will keep making them!
Read more
2 people found this helpful
Helpful
Report abuse

Yosi S.
5.0 out of 5 stars Purple monkey rescue!
Reviewed in the United States on May 30, 2016
Verified Purchase
My son loves all of the little golden books, so when we saw purple money rescue we just knew we had to buy it. He takes "purple monkey' everywhere and even makes me read it to him over and over again at bedtime. I dont mind though. Simply love these books!
Read more
2 people found this helpful
Helpful
Report abuse

jenny won kenobe
5.0 out of 5 stars just like the show!
Reviewed in the United States on November 24, 2014
Verified Purchase
This book is exactly like the "purple monkey" episode, which happens to be my son's favorite episode..so of course I had to get this book. He loves being read to (he's two yrs old) and this book made him laugh and laugh, just like the show. Great little book.
Read more
Helpful
Report abuse
See all reviews

Piranacon
2.0 out of 5 stars Poor quality.
Reviewed in the United Kingdom on March 30, 2013
Verified Purchase
My daughter loves this book as its Team Umizoomi. I, however, am less impressed. The book doesn't seem to be professionally bound, the pages are bigger than the cover and the edges of the cover are really sharp. Also, because of the way it is bound, you need to use two hands to turn the page. It can't be done with one hand at the top/ bottom of the book which makes cuddling and reading at the same time difficult. Mostly proving an issue at bedtime.

My daughter is oblivious to all faults and adores this book.
Read more
One person found this helpful
Report abuse

Stacey Gilbert
3.0 out of 5 stars Good book
Reviewed in the United Kingdom on December 14, 2013
Verified Purchase
I ordered this for my nephews for Xmas I was disappointed as there was not a lot of pages but they will love it
Read more
Report abuse

Tags that will help you discover similar books. 8 tags
in a serieskindle unlimited eligibleaction & adventureanimalsapes & monkeysholidays & celebrationsprime eligiblechristmas
Results for:
Page 1 of 1Start overPage 1 of 1
Previous page
Next page
Where do clickable book tags come from?
Book tags are created from a variety of sources, some of which are customer-generated. Amazon is not legally responsible for the accuracy of the tags represented. If you are an author or publisher and would like to remove a tag associated with your title, please contact your vendor manager or publisher support team.
Back to top
Get to Know Us
Make Money with Us
Amazon Payment Products
Let Us Help You
EnglishChoose a language for shopping. United StatesChoose a country/region for shopping.
© 1996-2021, Amazon.com, Inc. or its affiliates