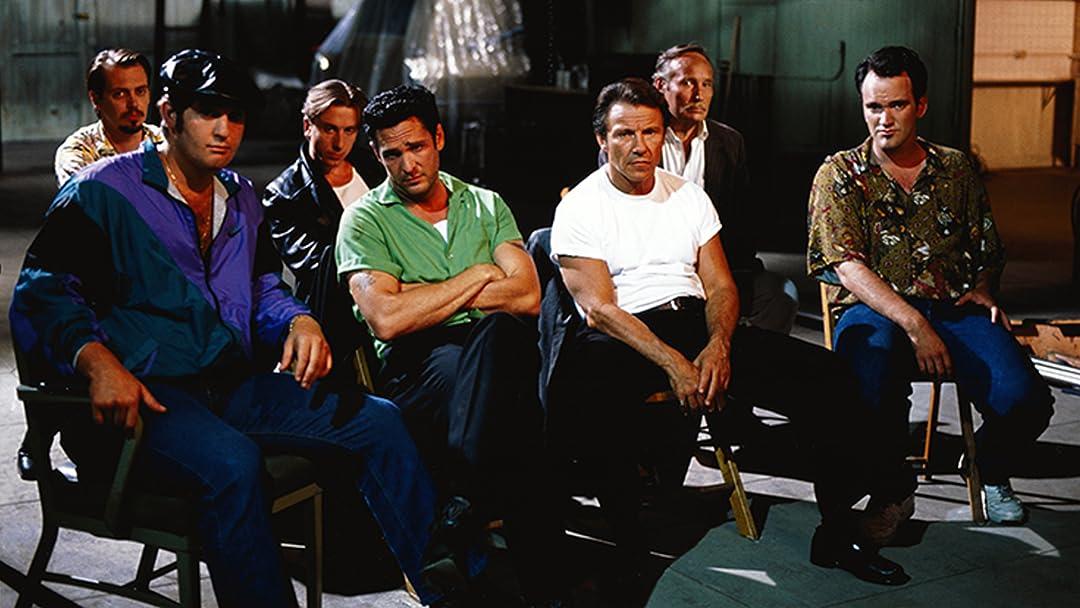 (881)7.31 h 40 min201918+
The famous faces of Quentin Tarantino films reminisce on their time and work with the infamous director.

Dave MatthesReviewed in the United States on May 17, 2020
1.0 out of 5 stars
A platform for a different cause, masking itself as a documentary about movies
Verified purchase
I love Q's movies. Love them, almost all of them, and even the ones I've watched less than others I've found pockets of characteristics in which to thrust my love into. However, as documentaries go, even as one supposedly about one of this generation's greatest filmmakers, this was horribly bland. In short, this was basically a circle-jerk for Q, conducted by some of the people he's worked with. Very little else is said other than "this guy is amazing", or "he's just a joy to work with". After the hundredth "this man really cares about film like no one else", I was ready to stab myself in the heart with a hypodermic dildo. And I have no love for Weinstein, he deserves an eternity in the darkest depths of Hell. But the shoehorn of his involvement with Q's movies felt artificial, like fake flavoring dripping from an otherwise tasty after-dinner desert. I thought this was supposed to be a documentary about Q's movies (which hardly anything new, if at all, is talked about). This was basically a roll of film that could've been titled with far more accuracy as "Everybody Loves Quentin Tarantino, but here's a cartoon about Harvey Weinstein that has little to no purpose".
6 people found this helpful

joel wingReviewed in the United States on March 9, 2021
4.0 out of 5 stars
Screw the Tarantino worship the stories by the actors & the nostalgia of the scenes is the draw
Verified purchase
Obviously QT8 is going to be nothing but praise for the genius of Quentin Tarantino. That’s not the draw because that’s boring. What’s good about watching QT8 is the stories from the actors that were involved in Quentin Tarantino’s films. They talk about the suits used in Reservoir Dogs, Michael Madsen’s dance in that film, etc. You get little trivia about connections between the different films like referencing Alabama from True Romance in Reservoir Dogs. I also liked that it included Harvey Weinstein and his abuses because he and Tarantino had a long relationship and Weinstein attacked several women in Tarantino’s films. At the same time it lets Tarantino off the hook because he only broke with Weinstein when he was publicly exposed and by his own admission Tarantino knew about some of the incidents and didn’t do anything about it. Overall I enjoyed this overview because of the scenes that brought back memories and the interviews of the actors.
One person found this helpful

NicoleReviewed in the United States on December 8, 2019
5.0 out of 5 stars
Fun journey through Tarantino's Career
Verified purchase
This is an improvement to Wood's first documentary, "21 Years: Richard Linklater." The interviews are entertaining and I imagine that each interviewee could speak for hours about their experiences working with Tarantino. Waltz and Madsen are excellent and I could listen to them speak for hours. This could have easily been a miniseries going through each movie individually at length, but this documentary achieves its purpose. For a documentary, this is well-paced. If you're expecting this to go into the Harvey Weinstein scandal, it doesn't go too far into that. Reading about this doc, it was shot before the Weinstein scandal came out.
6 people found this helpful

Felicia Amazon CustomerReviewed in the United States on February 24, 2020
5.0 out of 5 stars
A fresh take... worth a buy.
Verified purchase
As a fangirl I’ve see every interview and read every article written about QT... this documentary managed to surprise me and give me a fresh perspective of his filmmaking. It’s unbiased yet warm it’s funny in parts and perfectly paced. I watched with my daughter who knows nothing about Tarantino other than he makes cool movies and she was ready to go back and watch his earlier work after watching this doc. Very well done! A must see for movie lovers!
4 people found this helpful

Timothy H.Reviewed in the United States on December 30, 2019
5.0 out of 5 stars
Best Quentin Tarantino Documentary
Verified purchase
This is a very informative and interesting documentary about Quentin Tarantino. I learned a lot. I didn't learn what he's going to do after retiring from making movies after his next one (There's no mention of him writing and directing the next Star Trek). Other actors said he has told them what he intends to do and it will be interesting (write novels maybe). Every star in Hollywood trips over themselves to work with him. Tim Roth said when his phone rings and he sees QT on the caller ID, his heart skips a beat and he thinks "please let it be Quentin." Quentin's talent is a once in a lifetime talent. He will be sorely missed. I predict he may retire for awhile but then come back because he has a screenplay that only he can make.
One person found this helpful

EricReviewed in the United States on February 15, 2020
5.0 out of 5 stars
Personal Opinions aside, finest film maker of all time
Verified purchase
Not many movies are worth a second view, even less a third or forth. He makes the movies that entertaining that either you get it and love it or it's over your head and your missing out on cinema altogether. Love or hate the man he demands respect on screen and he earned it. To bad your boy Harvey couldn't keep his fat ass hands and shelled peanut to himself. I think QT is better that. Watch
2 people found this helpful

Richard M.Reviewed in the United States on December 8, 2019
1.0 out of 5 stars
Not a movie
Verified purchase
Had I known what this was I would never have ordered it. If I knew how to get a refund I would do it. We watched about 15 mins of it..
5 people found this helpful

Richard CarpenterReviewed in the United States on May 3, 2021
5.0 out of 5 stars
Really enjoyed it
Verified purchase
If you're a QT fan, watching this will be like enjoying a favorite past time and learning something more about it at the same time.

If you're someone who can take or leave him, watching this will likely win you over. The devotion he earns from the cast and crew by just being himself and the passion that shows in writing and directing on his movies is inspiring.