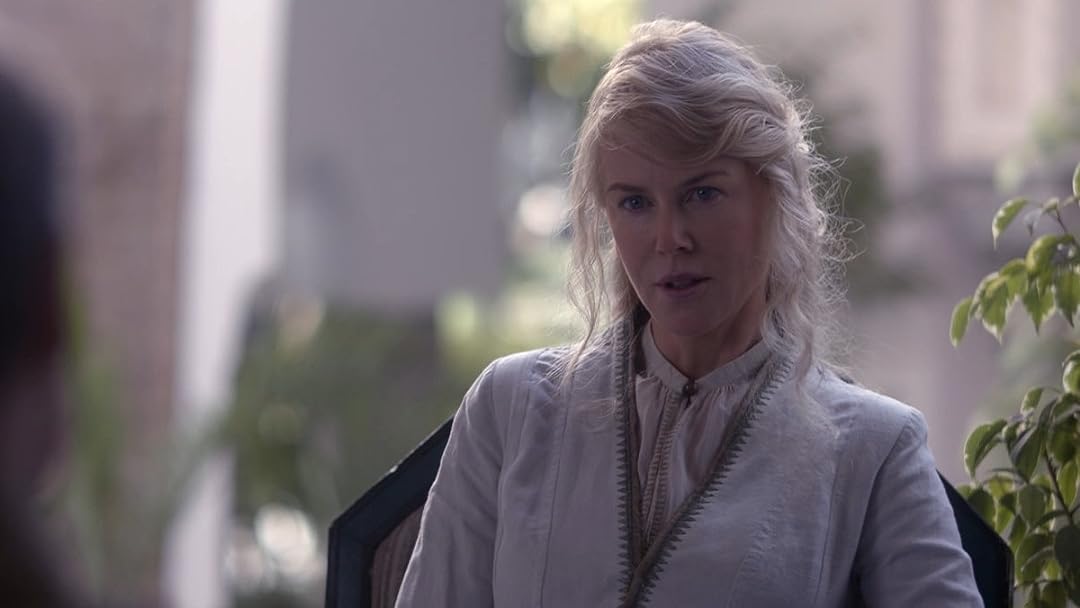 Queen of the Desert

SayehReviewed in the United States on June 27, 2017
3.0 out of 5 stars
Bell was not a Disney princess.
Verified purchase
I don't understand the need to lionize and idealize historic characters like Gertrude Bell. She was a human being; it's likely she was really unpleasant at times, certain she made mistakes, maybe sometimes behaved selfishly. I would rather know her as she was, not some hyper-romanticized, Disney princess version of Bell. I've given it 3 stars because it is visually quite appealing; the cinematography, costuming and set design are all truly lovely.
One really nitpicking comment: at about 34 minutes in, during a scene in which Bell and Cadogan are reading poetry in Persian, Cadogan is following the lines with his finger. He is running it over the page left to right, but Persian is read from right to left.
67 people found this helpful

John P. Jones IIIReviewed in the United States on June 4, 2017
2.0 out of 5 stars
A profound disappointment…
Verified purchase
I’ve been an immense fan of the movies of Werner Herzog, commencing in the ‘70’s, when I would routinely see them at the one “art” theater in Atlanta. Recently, I’ve been most impressed with [[ASIN:B00CFDAOPG Happy People: A Year in the Taiga]] and [[ASIN:B0037EAJA2 Encounters at the End of the World]], both of which I have reviewed on Amazon. So, when I saw Herzog’s latest work on one of the most remarkable women of the 20th century, Gertrude Bell, it went on the “immediate must see” list.

Ugh, and ugh again. It is a profound disappointment, one of those schmaltzy Hollywood love stories of both star-crossed and unrequited love. I was not familiar with the actress Nicole Kidman, who played Bell. It seemed to be an inappropriate casting. I certainly did not obtain a sense from Kidman of the real Bell who roamed the desert as a woman accompanied by only a few natives, and would successfully operate in a “man’s world” by negotiating with the leader of the Druze as well as the Rashids’ in Hail, in what would become part of Saudi Arabia.

The Director, if it was Herzog, depicted Bell at a big soiree in her grand home in England. Yes, she was from a very wealthy family, so that is fair. But where was the woman who literally blazed new climbing trails in the Alps BEFORE she went to Tehran to meet the love of her life? Not depicted at all. And where was the sense of the woman who wrote [[ASIN:0815411359 The Desert and the Sown: The Syrian Adventures of the Female Lawrence of Arabia]], and could write lines like: "To wake in that desert dawn was like waking in the heart of an opal..." Now that is a woman who has LIVED in the desert, and loved it.

In terms of historical accuracy, there seemed to be a number of real clunkers. In scenes set in 1906, the characters display this foreknowledge that there will be a World War when at the time, virtually everyone thought that would be an impossibility. There were a couple depictions of Churchill, one at the pyramids that did not seem plausible, and even if it really happened, seems so irrelevant to the drama of this amazing woman. But the worst faux pas was when Bell returns from Hail, and races off to meet her married lover, of their purportedly unconsummated relationship, Major Charles Doughty-Wylie, who is standing in the souks, in full British military uniform, in DAMASCUS. At the time, of course, Damascus was very much part of the Ottoman Empire, which was at war with the British Empire. It would take Allenby until 1918 to actually enter Damascus with British and allied forces.

The movie did contain a scene depicting one of her most significant achievements – along with the unmentioned Percy Cox, of creating the Kingdoms of Jordan and Iraq, one each, for the sons of Hussain, of Mecca, the loser in the struggle for the Arabian peninsula, with Ibn Saud. And it was also a serious problem that continues to haunt us today.

Admittedly I am a sucker for well-filmed desert scenery, and there was that, with the movie being filmed in Jordan and Morocco, and therefore I am willing to add an extra star to my rating. As for Herzog vision, voice and insights, they were completely missing from the movie, so I hope that he simply loaned his name to the film, for whatever reason. Overall, 2-stars.

AnonymiceReviewed in the United States on July 22, 2020
1.0 out of 5 stars
Herzog? Really?
Verified purchase
It is beyond belief how an accomplished director and documentarian could take a character like Gertrude Bell, in a land like the Middle East, during a pivotal time in history, and turn it into a mere costume romance, White Savior and totally blind orientalist film. It's definitely a chick flick (boring one!) with little meat at all. What a great insult to the polymath Bell, who was a real outlier in her time. Does Herzog (and Hollywood - no, don't answer that) really think that women only care about romance? That we'll sigh and turn it off if there is anything intellectual or interesting whatsoever? Please give us more credit. I'd rather see what made Bell tick, why Middle Easter men welcomed and respected her (besides wisely realizing they needed to network the powers that be), and more realistic conversations, not just, "I am honored...", and much less romance. This film begs comparison to Lawrence of Arabia, not in scope, but T. E. Lawrence is a character and was a "friend" (not sure how to describe him) of Bell's. Yet even Lawrence was somewhat trivialized by director David Lean in Lawrence of Arabia, in favor of scope, 70mm, and desert romance. But this film doesn't have the gloriously filmed desert, Omar Sharif or the amazing overacting of Peter O'Toole to save it.

Herzog is apparently blind to the realities and ethnicities of the Middle East, not speaking the correct language, and on and on. While there are actors of Middle Eastern descent, their ethnicities don't always line up correctly with the region or character (and Herzog, as an experienced documentarian, should know this and care about it). Not that any actor is unable to play any part, but it's an historical film (or purports to be) and this is a symptom of a disrespectful disease in film re non-Western characters and actors. And of course, there are European actors playing Middle Eastern characters. Not a lot, and mostly incidental, but the Shop Keeper is very European and dubbed, and quite embarrassing. Hard to take the historical aspects of the film seriously after his appearance.

This is no low budget flick, with great locations and filming, and costumes, yet Herzog turns it into a movie of the week which could have been shot on the back lot. Kidman, who I normally love, just phones it in here and cannot save this pile. She is one note throughout, barely acting at all, and not displaying the range and charisma I have come to expect from her. She is not a good simpering romantic and to cast her in such a flacid role was very disrespectful. Herzog should have just hired a young (we are supposed to think Kidman is 20+ yrs younger), shallow, cheaper actress.
7 people found this helpful

S.L. FerrisReviewed in the United States on September 26, 2017
1.0 out of 5 stars
"Female Lawrence of Arabia" I THINK NOT.
Verified purchase
VERY misleading trailer... furthest thing from female Lawrence of Arabia. The trailer made it seem like there was action, adventure and love. All the good things for an entertaining movie. This did not have it. Had to make myself watch the rest of it halfway through just to get my $4.99 worth. Was and extremely BORING and SLOW MOVING movie. Not worth the rent!
26 people found this helpful

Susan A. KoscielskiReviewed in the United States on October 29, 2020
1.0 out of 5 stars
Skip it and just watch Lean's Lawrence of Arabia (again)
Verified purchase
Was this movie made by someone that was disappointed Lawrence of Arabia wasn't a love story? That's what it seems like. A story of the tragic romances of a woman with the desert as a backdrop. What a waste of a great story about an accomplished and respectable woman. A complete disservice to the real Gertrude Bell.
The only scenes that are vaguely passable are taken directly from Lawrence of Arabia. Watch the two movies back to back and you'll notice it's less of an homage and more of just a copy. Even the score seems to have lifted elements straight from LoA & Kidman seems much more like she was trying to appear reminiscent of O'Toole instead of the actual drab and dark Bell.
Last few scenes when she finds out the tragic news and thanks Fattuh in the garden must've been reshot at the last minute because suddenly and jarringly the movie switches to the shaky handheld cam style of sitcoms.
Total waste of time and money. Instead of watch LoA and read one of the many great books on Gertrude Bell.
2 people found this helpful

sjpReviewed in the United States on October 1, 2017
2.0 out of 5 stars
Terrible writing. It's such a great story yet
Verified purchase
Terrible writing. It's such a great story yet, the script is so bland and contributes nothing to her as a character and focuses not on the history but on her love interests. James Franco's accent is painful. Kidman is of course excellent. Some of the cultural details are off which throws off the authenticity. Pattinson pales as TE Lawrence, who is an epic character yet is played incredibly two dimensionally. Who cast this film? I wanted to love it so badly. Lawrence of Arabia is one of my favorites. They clearly tried to emulate it but failed. Even the cinematography is flat. I've been to some of those locations, there is incredibly light and ways to capture that imagery which wasn't accomplished in the least.
16 people found this helpful
See all reviews
Back to top
Get to Know Us
Make Money with Us
Amazon Payment Products
Let Us Help You
EnglishChoose a language for shopping. United StatesChoose a country/region for shopping.
© 1996-2021, Amazon.com, Inc. or its affiliates