You've subscribed to The Venatrix Chronicles! We will preorder your items within 24 hours of when they become available. When new books are released, we'll charge your default payment method for the lowest price available during the pre-order period.
Update your device or payment method, cancel individual pre-orders or your subscription at
Your Memberships & Subscriptions
There was an error. We were unable to process your subscription due to an error. Please refresh and try again. 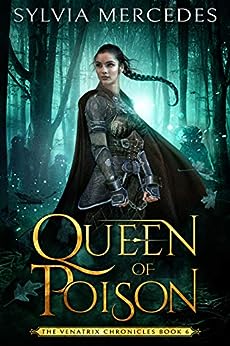 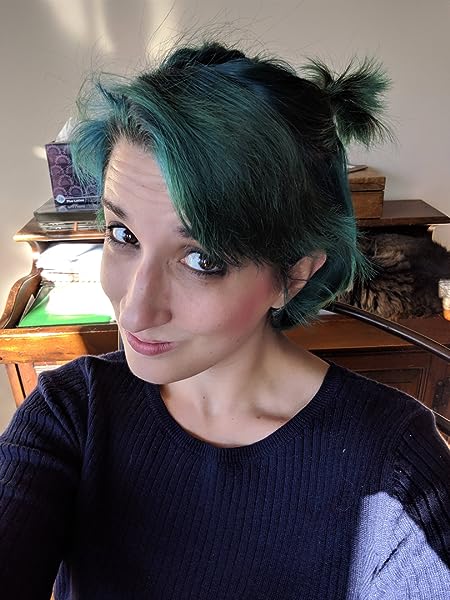 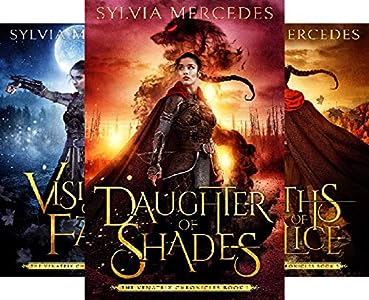 Sylvia Mercedes is the author of the Venatrix Chronicles series and the Scarred Mage of Roseward series. She makes her home in the idyllic North Carolina countryside with her handsome husband, sweet baby-lady, and Gummy Bear, the Toothless Wonder Cat.

Emily Lawrence, an actor and writer, is passionate about bringing stories to life. Her greatest strength as a performer is her ability to bring herself to the role, creating a wide range of emotionally resonant performances that leap off the page, stage, or screen. Her favorite characters are complicated, conflicted, and still searching for their inner truths. Emily's passion for her work is complimented by her persistence, resilience, and inexhaustible work ethic. She's narrated more than 190 audiobooks, half of which were USA Today or New York Times bestsellers, and has also worked in film, television, and theater. Born and raised in New York, Emily moved to Los Angeles shortly after receiving her BFA in drama from New York University's Tisch School of the Arts. She also had the privilege of living in London while studying at the Royal Academy of Dramatic Art (RADA). Emily's greatest loves are acting and reading, so narrating audiobooks is a dream come true. Her other passions include traveling, LARPing, aerial circus, and chocolate. --This text refers to the audioCD edition.

4.7 out of 5 stars
4.7 out of 5
199 global ratings
How are ratings calculated?
To calculate the overall star rating and percentage breakdown by star, we don’t use a simple average. Instead, our system considers things like how recent a review is and if the reviewer bought the item on Amazon. It also analyzes reviews to verify trustworthiness.
Top reviews

Nina
5.0 out of 5 stars Everything I hoped for and more!
Reviewed in the United States on May 20, 2020
Verified Purchase
What can I say? Sylvia Mercedes has outdone herself once again... many mid-series books are full of “filler” issues and seem to just be another book to prolong the series (imagine the last few Star Wars franchises 😬) Well, there was none of that here. Engrossing and compelling, this books dives deeper into Ayleth’s origins and heritage and leaves you gasping and dying for more. Mercedes does an incredible job delving deep into the understanding of how Dread Odile came to be the Witch Queen and actually leaves you feeling empathetic and understanding towards a character that would be an otherwise evil villain. My only regret is that I read it slower but alas, I received an ARC copy and flew threw it, staying up well into the night. Thank goodness for stay-at-home orders, at least I got to catch up on sleep the next day but the story stayed in the recesses of my mind for the few weeks that followed after completing the book. I couldn’t stop thinking about it and I am anxiously counting down the days until the next (last 😩😩😩😩😩😩😩) book. I’d give it a hundred stars if I could. Hands down one of the best series I’ve read in a long long time and I’ve read a lot!
Read more
2 people found this helpful
Helpful
Report abuse

K. Burger
5.0 out of 5 stars Everyone is racing towards what is clearly going to be an epic conclusion
Reviewed in the United States on May 27, 2020
Verified Purchase
I've been gobbling these books up as they come out and I always have to brace myself, take a deep breath, and dive in. I knew this was waiting on my Kindle all day long and it was like having a box of chocolates waiting for me under my pillow. I've been waaiiiitttting for more of Odile's story. I love seeing answers to the questions I've had now for 5 books before this one. I can't wait to finish the last book and then reread all of them in a row, hopefully not in one night...
This was a fast-paced second-to-last installment that put all the characters where they need to be for the epic finale. Ms. Mercedes gave us at least a few minutes with every one of our favorite characters. There was some good character development. There were a few surprises. And there was a lot of silent squealing and fast-paced heart beating on my end. I love this series and as always am jaw-droppingly, flabbergastedly amazed at Ms. Mercedes' imagination and ability to bring this world to life.
Read more
Helpful
Report abuse

Alisha C.
5.0 out of 5 stars Wow... So, so good!!!
Reviewed in the United States on May 20, 2020
Verified Purchase
This book was amazing! It was action packed with the added bonus of digging a little deeper into the why with Dread Odile! Still would like to strangle Fendrel and would also love for Ayleth to take him out. I always suffer a big hangover after reading Sylvia’s books after being enthralled in the world that she created. She has a way of hooking you in the story and not letting you go until it’s done and making you sorry that it’s over. This is a definite read!!
Read more
One person found this helpful
Helpful
Report abuse

Mariana H.
5.0 out of 5 stars It's here and Sylvia Mercedes has not lost her touch. In fact, she's even improved it.
Reviewed in the United States on June 20, 2020
Verified Purchase
I've been enthralled by this story ever since I opened the prologue of Daughter of Shades in early February and Ms Mercedes has not once disappointed me in the books I read then or the two installments she has published later on. Actually, she has stepped up her game and the Venatrix Chronicles has become a world of hope and heartbreak, politics and faith, plans thwarted and fixed, all this doused in a good amount of astonishing magic. I think it was the characters' development I loved best - the way they reacted to news that changed their worlds, the way they were ready - or not - to change with this new knowledge, the way they struggled with their hearts' desires and grew up to be responsible leaders or remained stuck in their ways. Apart from the obvious favourites Ayleth and Terryn, I was very impressed with the way Gerard and his new wife handled the constant changes in their circumstances. Dread Odile's chapters in this last book were a particular pleasure to read. I was a little disappointed every time I saw Inren without Fayline making an appearance because I am quite fond of the poor girl who has shown amazing strength of character but I fully believe in Ms Mercedes' ability and desire to leave me satisfied on this count as well.

All in all, I cannot say which part I expect with greater interest - the epic conclusion of the long war or the way the battles in the characters' heart will end. And this is the greatest acknowledgment I can give to the amazing Sylvia Mercedes. I have already preordered the first book of her new series and she's an author I will watch with great interest.
Read more
Helpful
Report abuse

M. Olson
5.0 out of 5 stars Just wow
Reviewed in the United States on July 2, 2020
Verified Purchase
As always, Sylvia Mercedes has left me on the edge of my seat!! This is book 6 of a series, and the first five have to be read first in order to fully appreciate Queen of Poison, so I don't want to give too many details!!! No spoilers! I WILL say that not only has Sylvia developed a unique and engaging plot but that she's also created characters with so much depth, that they've become almost real to me - characters I can't help falling in love with and rooting for!!! I usually don't read series because it is difficult for me to emotionally invest beyond a second book, let alone anything beyond a third. Ms. Mercedes is one of the very few exceptions! I highly recommend this series!
Read more
Helpful
Report abuse

Leisa Hart
VINE VOICE
5.0 out of 5 stars Lots of buildup and action—Looking forward to the next one!
Reviewed in the United States on May 31, 2020
Verified Purchase
I'm loving this series. There were a few questions that were answered in this book (who is Oromir? Who/what is Dread Odile and how did she become what she is?), and many that are being pushed to the next and final book in the series.

Overall, I was very happy with the action and buildup of this book. I've preordered the final book. Can't wait to see how everything ends!
Read more
Helpful
Report abuse

omnireader
5.0 out of 5 stars Still Betrayed
Reviewed in the United States on September 9, 2021
Verified Purchase
So is it dreams? Is it her reality? She is lost in her nightmares, feared and loved and scorned. All of the pieces come together, then are blown apart. Demons are destroyed and others rise to take their place. What are the real feelings and what is left after she wakes?
Read more
Helpful
Report abuse

LGR Miller
5.0 out of 5 stars So much going on...
Reviewed in the United States on May 21, 2020
Verified Purchase
I liked reading all the viewpoints. I didn't like that it stopped and left me wanting more. I really wish the MC and T. end up together. That seems impossible now. Especially, seeing the waking dream she had of the beautiful lies. I don't know how the writer is gonna wrap it up with everything...seems like it'll need at least 2 more books.
Read more
Helpful
Report abuse
See all reviews

Kindle Customer
5.0 out of 5 stars Addictive poison
Reviewed in the United Kingdom on May 25, 2020
Verified Purchase
Enjoying this immensely and glad I pick this whilst ferreting around for something to read in look down on the Uk. Looking forward to finale will follow you . Patricia
Read more
Report abuse

John Gray
5.0 out of 5 stars Brilliant story teller
Reviewed in the United Kingdom on June 6, 2020
Verified Purchase
Loved the series so far. Can't wait for the next book
Read more
Report abuse

Gregory
5.0 out of 5 stars Fast pace from start to finish!
Reviewed in Australia on May 19, 2020
Verified Purchase
Read this in record time with no breaks just had to couldn't put it down, very good drama and action including character and plot development.
Read more
Report abuse
See all reviews

Tags that will help you discover similar books. 6 tags
in a seriesunputdownablefairy tales, folk tales & mythsmystery, thriller & suspenseteen & young adultscience fiction & fantasy
Results for:
Page 1 of 1Start overPage 1 of 1
Previous page
Next page
Where do clickable book tags come from?
Book tags are created from a variety of sources, some of which are customer-generated. Amazon is not legally responsible for the accuracy of the tags represented. If you are an author or publisher and would like to remove a tag associated with your title, please contact your vendor manager or publisher support team.
Back to top
Get to Know Us
Make Money with Us
Amazon Payment Products
Let Us Help You
EnglishChoose a language for shopping. United StatesChoose a country/region for shopping.
© 1996-2021, Amazon.com, Inc. or its affiliates