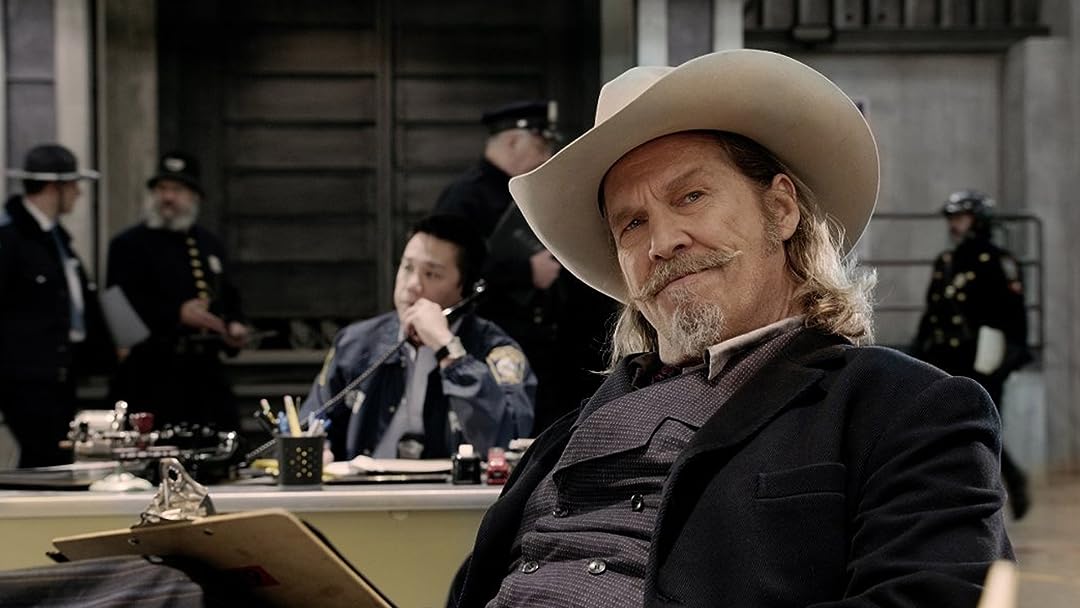 (11,765)5.61 h 36 min2013X-RayPG-13
Jeff Bridges and Ryan Reynolds headline this supernatural action-adventure as cops dispatched by the Rest In Peace Department to protect the living from destructive souls hiding on Earth.

lapisblueReviewed in the United States on December 26, 2016
5.0 out of 5 stars
Fun mashup of paranormal horror, comedy, cop: laugh a minute. Has it's GREAT LEBOWSKI moments!
Verified purchase
-----------------A NO-SPOILER REVIEW ZONE. -------------------
Absolute fun riot stuffed full of both easy jokey lines and deliciously twisty, weird semi-demi-philosophical banter that I could not get enough of! Nearly non-stop *big* action and real-enough paranormal effects...plus outrageous, terrific acting by Ryan Reynolds, Jeff Bridges, Mary Louise Parker, Kevin Bacon. By 2013 I'd pretty much had my fill of Zombie movies, and this was a fun, genius take on other possibilities for dead dudes. And dudesses.

The bizarro rules of RIPD's universe of (sort-of) resurrected cowboy lawmen, corrupt cops, invading "Dead -Ohs", and the comically efficient bureaucrats of some Eternal Mystery Management Team/ God/s actually had enough logic to anchor the ongoing outrageous action sequences, side stories... and Looming Cosmic Battle. I watch this movie every Christmas/Hannukah just to keep the Holiday drama in perspective.

And nope, it certainly is *not* a repeat of GHOST BUSTERS, as a couple of critics said back in 2013. They had clearly forgotten GB to come up with that. My take on the panning of the film was that RIPD was so outrageously different in its paranormal horror, thriller, comedy mashupness, that many critics were too lazy to abandon their rubber stamp classification routine. RIPD --like Jeff Bridges' other great dark comedy hit THE GREAT LEBOWSKI-- violates simple categories.

I can see how this film might send a little DID I JUST SEE THAT??!!! shock up the spines of both absolute atheists and fundamentalist Christians. I think that's a good thing. And it's why I suspect there was some boycotting of RIPD.

AND THEN THERE'S THIS DEPT.: Jeff Bridges' resurrected cowboy lawman has genius and often showstopper lines; he carries the movie. It's because of the accuracy of the 1870s cowboy lawman lingo --more wordy in the kind of near-Biblical way of speaking, kind of Mark Twain, that I think it's hard to catch the jokes-within-jokes and multiple irony going on. Back in the day, many Americans living on farms and ranches learned to read from the King James vers. of the Bible. You can see it in newspapers from that era, as well. They didn't talk like comic book and vid game characters then, so R.I.P.D. has some historical accuracy built into this rich, character. The aging lawman also has a bit of kink going on with his supervisor...which spiced up the cop-buddy film aspects to keep it interesting on a whole other level.

Don't miss RIPD. It was great action + hilarious writing + some of the best pacing in any film, make that any kind of film, ever.

SIDE NOTE FOR EDUCATORS: If you teach philosophy, religion, or film, I'm betting you'd generate great discussions by screening or assigning RIPD for your class.

Annie KReviewed in the United States on July 19, 2018
5.0 out of 5 stars
Jeff Bridges steals the show, but Ryan Reynolds is cute too.
Verified purchase
I cannot get enough of Jeff Bridges in a cowboy hat. Buy the movie for the pretty face of Ryan Reynolds, but love the movie because of Mr. Bridges character. I know that Ryan Reynolds is supposed to be the main character, but Jeff Bridges puts on a HUGE performance in this movie. Some of his best work since True Grit, which I was highly skeptical of, but he did the Duke proud. Another movie I recommend highly. Also Crazy Nights is a favorite too. He plays a "Willie, Waylon & Merle" kind of singer, an outlaw, past his prime but trying to get back in the game. He sings in the movie and I highly recommend the soundtrack. I don't know why "Falling feels like Flying" wasn't a number one song. It's a damn fine country song. (Available on Napster)
7 people found this helpful

ReasonReviewed in the United States on February 21, 2021
1.0 out of 5 stars
There's a reason it has 13% on RT.
Verified purchase
There's a reason it has 13% on RT. Such a waste of time. Predictable plot. Stupid origin story. Two dimensional wife/love interest. Shiny MacGuffin. Bad CGI. Unbelievably boring. I got 20 minutes in and started to wonder when it was going to get good and, as another reviewer said, provide a laugh a minute. Well, the answer is never. It never gets good.

Reynolds is good. Bridges is good. Bacon is good. Szostak was as good as she could have been given she had nothing to do in the script but to adore Reynolds. It's a crap movie.

Don't waste your time. A week after I watched it, I'm still angry about my wasted hour and a half. Go watch MIB or Ghostbusters or 48 Hours instead.
2 people found this helpful

Jack E. Holt, IIIReviewed in the United States on June 29, 2015
3.0 out of 5 stars
"Beetlejuice Meets Buddy Cop Film"
Verified purchase
I can really add nothing more. It's as funny as it sounds like it can be in many places. And then again in many places it's not.

Kevin Bacon, Mary Louise Parker, and Jeff Bridges were great and used their material to its fullest. Ryan Reynolds was a little too intense and I wish his lighter side had come through somehow. Maybe he saw the reviews for Green Lantern just before filiming RIPD. I don't know.

One brilliant thing was that neither RIPD agent appears like himeself to living people. Ryan Reynolds usually appears like himself to us the viewer most of the time, but then when we see him in a camera or reflections, the veteran character actor James Hong (holding a banana instead of a firearm) takes Reynolds' place. I wish we had seen more of the movie from that point of view actually. When I imagine the dialogue delivered by James Hong instead of by Reynolds, it becomes much funnier and I think the absurdity of those re-shot scenes might have lightened up the weaker parts of this movie. It probably would have been much funnier frankly.

Great special effects. 3D was worth it.
12 people found this helpful

DonReviewed in the United States on April 30, 2021
5.0 out of 5 stars
Funny original concept
Verified purchase
Instead of being a remake/reboot of a an older movie this is a pretty new idea as far as I know so that was nice.

Its a lot of low brow slapstick but its nice to unplug and just watch something silly once in a while.

I picked this up for $5 but would have gladly paid $10 and I'll probably watch it a few times a year when I need some mindless entertainment.
2 people found this helpful

Big MommaReviewed in the United States on May 26, 2016
5.0 out of 5 stars
Good Good movie.
Verified purchase
I've seen this movie several times already. It is true that it has some resemblance to 'MIB' (Men In Black) but not much! So much of the dialogue is spoken absolutely dead-pan, no over-the-top hipness or larger-than-life characters like Rip Torn. Jeff Bridges does sport a twangy drawl, as did Tommy Lee Jones. However, the similarities stop there.

There is a running gag throughout the movie about what the Jeff Bridges character finds sexy in women. It has to do with the time he lived in (the 1800s). The body he gets on earth this time around is wasted on such a character.

Ryan Reynolds is perfectly paired with Bridges. The very last scene is so funny, such a fitting ending and new beginning, for both characters.

The truly wonderful thing about 'RIPD' is its pace. It rambles along, like the shoot-em-up lawmen these characters are. There aren't any slow patches, there aren't any speedy segments. It is just like a wonderful comic book read - and that is where the story comes from. Good work!
7 people found this helpful

stormsweepReviewed in the United States on June 3, 2016
5.0 out of 5 stars
Awesome Fun
Verified purchase
I love this movie! It is quirky but I think it has a good story line. We have theft, murder, romance, death, guilt, andregret and a host of never before seen characters in a far fetched or as far as you can stretch the idea of life after death. For me it was hilarious and in a way mildly thought provoking. When I want just fun in a movie this is one of those I go to. I thought Jeff Bridges character was a hoot! Ryan Reynolds was as usual fantastic and carried off his character's with just the right amount of guilt and tenderness. Kevin Bacon was a surprise for me and I enjoyed his character. I highly recommend this movie! Received this on time and in excellent condition!
6 people found this helpful