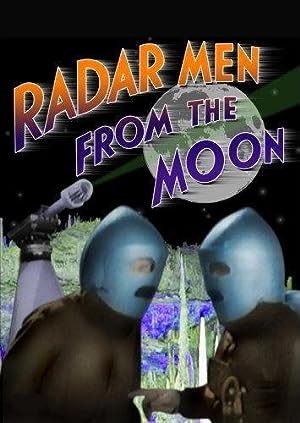 Radar Men From The Moon

(124)
4.92 h 46 min195213+
Blast off with one of the most beloved sci-fi serials of all time! Atomic activity on the moon leads Commando Cody on an action-packed mission to stop Retik, the moon leader, from invading Earth with his rocket-powered henchmen. Can our hero stop this villain before the planet is colonized by lunar loonies?

Stanley Kohl;Reviewed in the United States on October 15, 2020
3.0 out of 5 stars
Low vertical resolution for a Blu-ray
Verified purchase
"Radar Men from the Moon" is a 12-chapter serial from Republic Pictures, directed by Fred C. Brannon and released in 1952. It is far from the studio's best effort but the dreadful acting, lame dialogue, unbelievable plot and bad science are a delight to those who appreciate "so bad its good" films. It is worthy of a good, clean Blu-ray, but unfortunately Grapevine's is not that edition. It is on a single BD-R, adequate for the short duration of this serial. The menu works well, and while no index marks are provided within the chapters, they are short, 13 1/3 minutes with the exception of the first one. The problem is that the image, while "watchable" is seriously lacking in vertical resolution, especially for a Blu-ray.

I'm not sure where Grapevine gets the information they put on their website, but I'll give them the benefit of the doubt and blame the supplier of the "master" for this release. It is clearly NOT a "2K scan from a black-and-white print." Scanning lines are obvious, and the distance between them shows there are only 240 of them. The transfer missed the alternate fields of the original interlaced frames, the likely source being Republic's Laserdisc from the 1990s. I've added some images taken from a TV screen comparing Grapevine's Blu-ray with Mill Creek's old DVD, likely also from the Laserdisc. DVDs with interlaced video will only show one field in "pause," 240 pixels vertically, while in "play" the full frame doubles this number. As can be seen, the lines extending from the letters in the main title are smoother when the DVD is in "play" mode. Grapevine's Blu-ray looks the same in both modes, much like Mill Creek's "paused" DVD. The missing fields also explain why there is a slight roughness to the motion; every fourth frame is repeated without benefit of the interlaced second field, where the repeat happens at a different time.

I like Grapevine video, though it would help if all their transfers were as good as their customer service. Some of their Blu-ray releases are fine. On this one the horizontal resolution is better than on many DVDs taken from the same source, and the sound has been cleanly transferred. I'll give it a 3-star "OK" for that. But while adequate for viewing on a smaller screen, it hardly justifies additional expense over a good DVD transfer.

Paul B SmithReviewed in the United States on June 15, 2020
4.0 out of 5 stars
For collectors
Verified purchase
Well the menu looks like something you would edit your home movies on in 1995 and the cover incorrectly states 2 discs instead of one but I for one am just glad it is out there to purchase. The picture is okay not great the brights are a little overblown and the detail is good a tad better than dvd but not by that much. The disc also looked burned rather than pressed but I applaud the company for releasing this niche product.
2 people found this helpful

They Call Him Funky DReviewed in the United States on January 3, 2021
2.0 out of 5 stars
Fun Serial, MOD Release
Verified purchase
Item arrived damaged, which I understand occurs. However, item is also a burnt disc and the slipcover was clearly printed on a ink jet printer with a low cartridge. Nothing in the description of this item discloses that it is MOD. This would not necessarily be a problem if it were stated upfront, but is unacceptable as a surprise revelation.
2 people found this helpful

DMcLReviewed in the United States on August 19, 2021
4.0 out of 5 stars
Silly fun
Verified purchase
Although I have a number of SciFi movies I enjoy from the 50s and 60s, I had never even heard of a "Republic serial" before ordering this. The two discs played well enough (except for a brief glitch on the second disc) and the sound was certainly clear enough. I don't really have other similar DVD serials to compare it to for technical quality but note that it was recorded on a DVD-R on demand. The packaging is fine.
The short episodes are silly for sure and fistfights predictably break out every 5 minutes but it was worth the small price of admission. That being said, I'm really not sure if I will buy any more serials in the future. Kind of feels like I've been there, done that.

THEMEDICINEHORSEReviewed in the United States on February 23, 2021
4.0 out of 5 stars
WHAT MEMORIES
Verified purchase
I watched this every Sat. at the theater in Ramstein AFB in Germany when I was a kid. I don't think I ever missed a show. I really loved the "atomic hand grenades" Later in the show. This really brings back memories. The only bummer was that at intermission they showed facts about the death camps, it was a German theater and they were required to show this, HOPING THAT IT WOULD NEVER HAPPEN AGAIN. I guess that we kids were a lot tougher back then. Can you "imagine" trying that with the little Princes and Princesses today? You could not afford the therapy.
One person found this helpful

MyPenNameReviewed in the United States on August 25, 2012
4.0 out of 5 stars
Amusing low-key silly - this one will stay in my collection
Verified purchase
There are at least two rollicking fist fights in every episode, complete with chairs broken over heads, plus a bonus of no fewer than 3-4 handgun fights where nobody ever hits their target. Now, most people in a fist fight with a pot over their head would be tripping over everything in sight, but not Commando Cody. Possibly in recognition of the challenges of head-pot fighting, the writers do make Cody loose every brawl he is in, or at least escape at best, until the last episode. The pot thing may also explain why he can't hit anything with his .38 revolver, but the thugs are just plain bad shots.

The dame of the series hangs around in attractive outfits, asks what just happened and what will happen next (ostensibly just to give her some lines), stays out the way when there's a fistfight in the spaceship, and offers to make post-fistfight coffee; apart from that she's not good for much. By the way, there is sun-lit blue-sky all the way from the Earth to the Moon, or so we must presume since its in B&W. Cody survives certain destruction in a remote locale at least once in every episode, and then evidently hitch-hikes back to his office but they never show that part. In one episode they had announced his survival on the radio before he got back, so he must have hitchhiked with a reporter.

On the Moon everybody, even Moon people, must carry gas on their backs and breath through regulators or else suffocate, except for Commando Cody. The moon men are the bad guys and wear satin outfits with matching cape and close-fitting hoodies, and possess weaponry far out-classing anything on Earth; yet, to Commando Cody's good fortune they seem to prefer a good fist fight. The top bad guy has a swell laboratory with all kinds of gadgets in it (except he really should use more dry ice in those flasks of water) and has a much nicer wardrobe than his Earth-bound lieutenant, including a spiffy satin cape with a paisley design on it. It took me a while to notice the Paisley design - a reward of close observation. The Earth-bound Moon-man lieutenant wears all black, and, assigned to "get Cody" keeps trying the same method over and over again always expecting a different result - that is, he reassigns the same two Earth morons and leaves the details up to them.

On the Moon, one of the bad guy troopers almost gets Cody once, until Cody pinches his breathing hose for three seconds and he surrenders, after which they give him a plate of food to keep him quiet - still completely unbound - while at same table they plot how to steal his boss's Lunarium supply. While traveling in the space ship, Cody, his pal and the dame sit on castored steel office chairs and lean back in them when launching. One time one of them had trouble getting his chair upright again (you know how office chairs are). Commando Cody is aerodynamically excellent when streaking through the sky - arms stretched out before him - except when he reaches down to fiddle with his controls (on-off, up-down, fast-slow), which would send any other flyer careening out of control...but...not Commando Cody...and on and on it goes.

I've hardly begun to relate how enjoyably silly this thing is, except they weren't trying to be campy. I don't mean over-the-top silly, I mean low-key silly that happens often enough to keep one amused. Those of the indoor sets and props that are meant to look futuristic, are actually quite complete and well-done for this level of entertainment. If you've watched a lot of 50's sci-fi you will recognize the Moon-troopers' space suits; I think they've been used in at least a half-dozen different productions. Overall I enjoyed watching the entire length of this and will probably view it again someday.

The DVD production quality of this Alpha Home Entertainment release gets no complaints from me at all. The images are clean, plenty crisp enough, good sound and the contrast is just right.
7 people found this helpful

hiznikReviewed in the United States on October 4, 2019
3.0 out of 5 stars
What did you expect to find here?
Verified purchase
"I still think this is no trip for a woman."

"Now don't start that again. You'll be very glad to have someone along who can cook your meals."
One person found this helpful

Richard HatfieldReviewed in the United States on June 16, 2014
3.0 out of 5 stars
Clayton Moore's a bad guy in this one.
Verified purchase
I love these old cliffhangers. In this one, three men wearing double-breasted suits and wide-brimmed hats, board a space ship, shackle on a seat belt, and they're off to the moon (no need for space helmets). Clayton Moore is a bad guy, but not as mean as Roy Barcroft - Roy's the best evildoer ever. It's hard to believe this serial was shot in 1951. The only indicator is the sight of a '51 Ford and a '51 Merc. The other cars are 1930 models. Plus it's filmed in grainy black & white. It can't top Purple Monster or Crimson Ghost, but it's a fun watch.
3 people found this helpful
See all reviews
Back to top
Get to Know Us
Make Money with Us
Amazon Payment Products
Let Us Help You
EnglishChoose a language for shopping. United StatesChoose a country/region for shopping.
© 1996-2022, Amazon.com, Inc. or its affiliates