You've subscribed to Poppy! We will preorder your items within 24 hours of when they become available. When new books are released, we'll charge your default payment method for the lowest price available during the pre-order period.
Update your device or payment method, cancel individual pre-orders or your subscription at
Your Memberships & Subscriptions
There was an error. We were unable to process your subscription due to an error. Please refresh and try again. 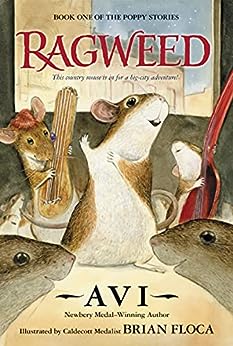 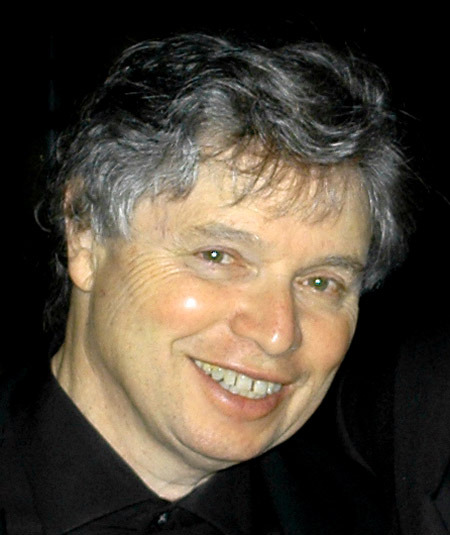 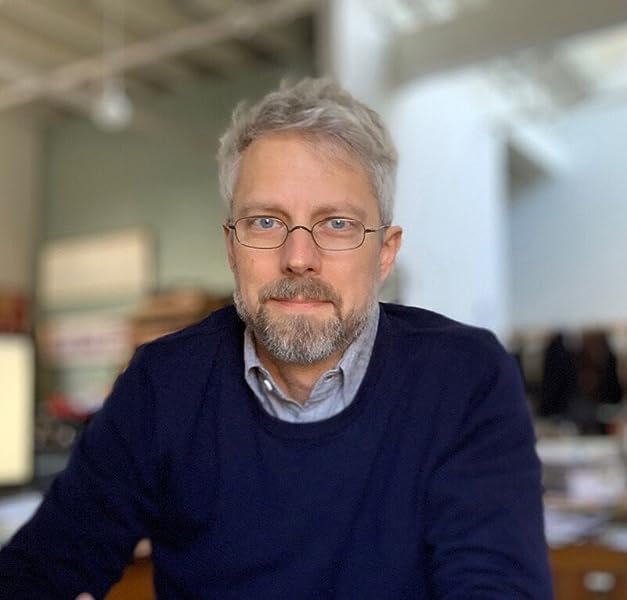 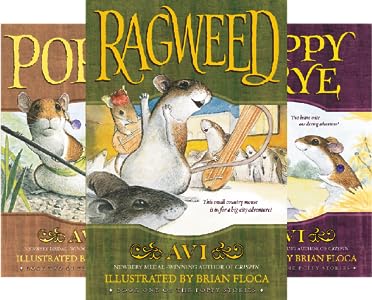 Consummate storyteller Avi outdoes himself in this prequel to Poppy and Poppy and Rye, cutting loose with a crackerjack tale that's pure delight from start to finish. Here Ragweed, the adventurous mouse with whom Poppy is destined for a tragic romance, hops a train and heads for the bright lights of the big city. The hip urban setting hops with adventure and memorable characters, from the punk-haired mouse Clutch, who plays lead guitar for the Be-Flat Tires at the Cheese Squeeze Club, to Silversides, the malevolent puss president of F.E.A.R. ("Felines Enraged About Rodents"). Ragweed is wowed by the excitement of Amperville, with its abundance of "human nests," and quickly evolves from bumpkin to city slicker, picking up the lingo and mastering the "high four" paw slap. But cat-mouse hostilities escalate, with the cats destroying the Cheese Squeeze Club (the mice set up a new hang-out in an abandoned building once known as The Last Independent Bookstore). Ragweed rallies his fellow mice to lead a revolt against F.E.A.R. in a triumphant ending that finds the cats literally all washed up. Fueled with a mixture of outrageous puns and sly witticisms, this is, as Clutch would say, one totally awesome tale. High four! Final art not seen by PW. Ages 8-12.
Copyright 1999 Reed Business Information, Inc. --This text refers to the paperback edition.

Ragweed is determined to see the world. He leaves his family and cozy country home and sets off by train for the big city. What wonders await him: music, excitement, new friends...and cunning, carnivorous cats! Silversides is the purring president of F.E.A.R. (Felines Enraged About Rodents), a group dedicated to keeping cats on top, people in the middle, and mice on the bottom. Can Ragweed and his motley yet musical crew of city nice--Clutch, Dipstick, Lugnut, and Blinker--band together to fight their feline foe? --This text refers to an alternate kindle_edition edition.

"A crackerjack tale that's pure delight from start to finish."--" Publishers Weekly" (starred review)"Should appeal to fans of the series and newcomers as well...the thrilling climax at the Café Independent will leave them breathless."--" School Library Journal" --This text refers to the paperback edition.

Avi (see review, above) elaborates on the ``city mouse, country mouse'' theme in this rousing prequel to Poppy (1995), starring Poppy's ill-fated beau. Impelled by wanderlust to hop a train to who-knows-where, Ragweed ends up in the rundown part of Amperville, where the local mice (all named after car parts) are being terrorized by Felines Enraged About Rodents (F.E.A.R.), a two-cat extermination squad led by evil-tempered Silversides. After several brushes with death, Ragweed defiantly teams up with Clutch, green-furred lead guitarist for the B-Flat Tires, to open a dance club for mice only, then in the climax organizes a devastating counterattack that sends F.E.A.R. scurrying out of town. In the end, though, Ragweed opts for the country life (little knowing that it's going to be sweet but short). A colorful cast in which even the ferocious Silversides comes in for a dash or two of sympathy, plus a plot replete with, of course, narrow squeaks will keep readers turning the pages, while Floca's scenes of tiny mice fleeing looming, toothy predators add more than a touch of drama. (Fiction. 10-12) -- Copyright ©1999, Kirkus Associates, LP. All rights reserved. --This text refers to the paperback edition.

Grade 3-6-Ragweed, the golden mouse who appeared briefly in Poppy (Orchard, 1995) before being devoured by an owl, gets an entire book to himself in this prequel. At an early age, he sets off to explore the world beyond the Brook, so he hitches a train and ends up in the town of Amperville. Unfortunately, a fierce house cat named Silversides has created an organization called Felines Enraged About Rodents (F.E.A.R.), and is trying to rid the town of all mice. Ragweed is saved from Silversides's claws by Clutch, a streetwise young mouse who dyes her head fur green, wears an earring, and plays in a rock band. As F.E.A.R. becomes more and more of a threat, Ragweed and Clutch hatch a plan to unite the town mice at their new club, the Caf? Independent, where they stand up against the cats and win. After this victory, however, Ragweed's wanderlust compels him to leave Amperville and travel onward...to Dimswood Forest. Fun and breezy, this adventure should appeal to fans of the series and newcomers as well. It does bog down whenever the focus goes from Ragweed and his friends to the bitter Silversides, and kids probably won't be interested in Clutch's stereotypically bohemian parents (an artist and a poet). The constant slangy jive-talking of Clutch and her pals ("Look, when I say cool, I mean, you know, like, it's good") will either irritate or amuse readers, but the thrilling climax at the Caf? Independent will leave them breathless.
Eva Mitnick, Los Angeles Public Library
Copyright 1999 Reed Business Information, Inc. --This text refers to the paperback edition.

"A mouse has to do what a mouse has to do," states young Ragweed, leaving his family to see more of the world. We first met Ragweed, albeit extremely briefly, in Poppy (a Booklist Editors' Choice 1995), in which he is snatched up and eaten by the terrifying owl, Mr. Ocax. Here, we learn what a stalwart mouse Ragweed is as he hops a freight train, lands in the rundown town of Amperville, and barely escapes the clutches of Silversides, a very angry white cat, the founder of F.E.A.R. (Felines Enraged about Rodents). Ragweed takes up with hipster mice band members Clutch, Dipstick, and Lugnut. "You cool enough to hang with me, dude?" asks Clutch. When Silversides and her sidekick, Graybar, destroy the Cheese Squeeze Club, killing many mice, Ragweed not only leads the town mice to transform an abandoned bookstore into the cool CafeIndependent but also directs the battle against the opening night invasion by F.E.A.R. And like an old-time hero, Ragweed rides off into the sunset--aboard another freight train. Fans of Poppy and Poppy and Rye (1998) will relish the humor and the adventure, but they also may be glad they didn't know Ragweed so well before he was offed in the first story. Sally Estes --This text refers to the paperback edition.

Avi is the author of more than sixty books, including Crispin: The Cross of Lead, a Newbery Medal winner, and Crispin: At the Edge of the World. His other acclaimed titles include The True Confessions of Charlotte Doyle and Nothing But the Truth, both Newbery Honor Books, and most recently The Seer of Shadows. He lives with his family in Colorado.

Brian Floca's illustrations have appeared in several books by Avi, including the six volumes of the Poppy stories and the graphic novel City of Light, City of Dark. For younger readers, he is the author and illustrator of Moonshot: The Flight of Apollo II as well as the highly praised books Lightship, a Robert F. Sibert Honor Book and ALA Notable Book; The Racecar Alphabet, also an ALA Notable Book; and Five Trucks.

4.7 out of 5 stars
4.7 out of 5
175 global ratings
How are ratings calculated?
To calculate the overall star rating and percentage breakdown by star, we don’t use a simple average. Instead, our system considers things like how recent a review is and if the reviewer bought the item on Amazon. It also analyzes reviews to verify trustworthiness.
Top reviews

Tinker Bell
5.0 out of 5 stars I am an adult and love children's books
Reviewed in the United States on July 1, 2015
Verified Purchase
I am an adult and love children's books. This series was such a joy to read. I rarely read books twice, but I could read this series again. I sent them to my nieces to read. I asked a neighbor girl if she had read them and she just grinned cheek to cheek! It was a very enjoyable series! You must read them in order and I wish the books were marked with a large number, but I hope I have them in correct order: 1 Ragweed, 2 Poppy, 3 Poppy & Rye, 4 Ereth's Birthday, 5 Poppy's Return, and 6 Poppy and Ereth. My fourth grade teacher was an old Scottish lady and she used to make us put our heads down the last 15 minutes of the day and she would read to us. What a joy that was! This series would be good for that purpose - everyone goes home totally relaxed.
Read more
12 people found this helpful
Helpful
Report abuse

Bobbie Lu
5.0 out of 5 stars Ragweed (Poppy)
Reviewed in the United States on May 2, 2021
Verified Purchase
I taught fourth grade for many years. The Poppy series was one of many that I kept in my classroom library. My grandchildren loved them when we read to them. I bought this book as a gift for the grandchild of a friend. I'm a believer that the more you consistently read TO a child, the more likely he/she is to love reading and become a better reader. The research is strong about this.
Read more
Helpful
Report abuse

SweetPDreamer
1.0 out of 5 stars Print is too Small.
Reviewed in the United States on January 14, 2021
Verified Purchase
I'm sure the book is great, but the publisher needs to make sure the print is large enough for younger readers. We had to choose another book fro my son to practice his reading with beucase the print is tiny.
Read more
Helpful
Report abuse

p brown
5.0 out of 5 stars Another great Avi book.
Reviewed in the United States on August 7, 2020
Verified Purchase
I bought this for my niece's birthday as I have enjoyed reading Avi for many years and a teacher.
Read more
Helpful
Report abuse

D2126
5.0 out of 5 stars Great Children's book
Reviewed in the United States on February 26, 2014
Verified Purchase
My Grand daughter is reading the book Poppy in her classroom and this is the first book of the series. She is loving this book, it is action packed and a great book for a third grader.
Read more
2 people found this helpful
Helpful
Report abuse
See all reviews