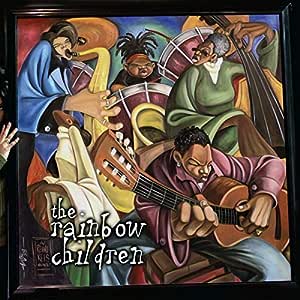 Listen Now
Go Unlimited
Start your 30-day free trial
Listen to any song, anywhere with Amazon Music Unlimited. Learn More
Your Amazon Music account is currently associated with a different marketplace. To enjoy Prime Music, go to Your Music Library and transfer your account to Amazon.com (US).

As the world greeted the promise of a new millennium, even Prince was experiencing a great sense of transformation. In 2000, he announced the reclamation of his birth name after seven years as an unpronounceable symbol. In 2001, after a period of study and debate with his friend and mentor Larry Graham (former bassist for Sly and The Family Stone), Prince converted to the Jehovah's Witness faith. These transformations bore fruit with the release of The Rainbow Children at the end of 2001. Billed as "controversial" in its press materials for its open spiritual message, the jazz-inspired record was Prince's first fully independent release, issued without any major label backing. The Rainbow Children is a continued favorite among Prince's most fervent admirers due to its complex musical narrative, its use of live drums and a full horn section, and the striking album art by artist Cbabi Bayoc, which still hangs in the hallowed halls of Paisley Park today. This new double LP vinyl edition comes on limited edition crystal clear vinyl packaged in gatefold packaging along with an exclusive Prince rainbow slipmat.

4.5 out of 5 stars
4.5 out of 5
28 customer ratings
How does Amazon calculate star ratings?
Amazon calculates a product’s star ratings based on a machine learned model instead of a raw data average. The model takes into account factors including the age of a rating, whether the ratings are from verified purchasers, and factors that establish reviewer trustworthiness.
Top Reviews

Lisa J. Jones
5.0 out of 5 stars Spiritual and sublime
Reviewed in the United States on September 16, 2018
Verified Purchase
This is easily the most controversial of Prince's albums to fans. It is jazzy and guided by his faith in as public a way as he had ever done. I contend he was always spiritual and this jazzy effort contains some songs that are very dear to me. Last December is one of the most beautiful songs I have ever heard. The album is worth it just for that song. That said there is so much more.
Read more
9 people found this helpful
Helpful
Comment Report abuse

FrbnScience
4.0 out of 5 stars It's Complicated...
Reviewed in the United States on June 4, 2020
Verified Purchase
First, the vinyl release sounds fantastic. Another amazing job by Sony legacy. Now, the music:

I'm a lifelong Prince fan for over thirty years and bought this album at midnight of release, ran home, popped on the cd.... and then promptly turned it off half way through. I hated it. 19 years later though, I can finally look past the questionable lyrics and misguided narration running over the top of most of these songs and enjoy the music. Because musically, at least, this thing is a thunder clap of genius. One of his best musical works. Sadly the awful narration promoting Jehovah's Witness beliefs just never ever gets any easier to swallow. You should own at least 15 Prince albums before buying this one I think, not because it's not sonically amazing but rather because any casual fan will turn it off within the first ten minutes due to the narration. Still, I'm glad to have it on vinyl and it is a great addition to anyone who wants to hear just how strange and brilliant this guy was. Rainbow Children shows off both traits more clearly than most albums. The fact that it is still the most divisive Prince album almost 20 years after release though should give a buyer pause. Stream it first and then see if you're up for this odd, wonderous, crazy, misguided and ingenious journey into Prince's uncompromising world view.

zride96
5.0 out of 5 stars Great Sounding, Great Looking Release!
Reviewed in the United States on June 7, 2020
Verified Purchase
After almost 20 years this album has been re-released on clear vinyl. The bonus is the rainbow patterned Prince slipmat. Put down the slipmat, set down the record, sit back and listen. It sounds amazing! One of the cleanest vinyl playbacks I've heard in a long time. Glad to see that the Prince Estate is releasing these albums with a little extra something. I have the original vinyl release and the clear vinyl and slipmat made me get the reissue. Well done!
Read more
Helpful
Comment Report abuse

Richard
4.0 out of 5 stars Fascinating musical journey
Reviewed in the United States on June 5, 2020
Verified Purchase
This album was where Prince decided to do what HE wanted. He made a Jehovah's Witness album. This may turn people off, but this is some of the most challenging and exciting MUSIC from Prince in years. He sounds new and freehand revitalized. I am not a JW, but I still can appreciate the message and the music.
Read more
Helpful
Comment Report abuse

Stephen T
4.0 out of 5 stars Vinyl Pressing Issue
Reviewed in the United States on June 1, 2020
Verified Purchase
My review is for the 2020 vinyl reissue. The music is great, Prince really pushes the envelope here. One concern on the pressing, on the first A&B side disk the needle is really moving back and forth within the grooves. It didn't skip but it clearly has a pressing issue. The second disk, with the C&D sides had no such issue.
Read more
One person found this helpful
Helpful
Comment Report abuse

J. Donato
4.0 out of 5 stars Jazzy and Funky Prince
Reviewed in the United States on June 10, 2020
Verified Purchase
Prince and the NPG are at their funkiest. This album takes a few listens and it’s essentially a concept album about finding the positive power within yourself. Long jams with a touch of jazz fusion.
Read more
One person found this helpful
Helpful
Comment Report abuse

Memsey
5.0 out of 5 stars prince rainbow children
Reviewed in the United States on June 11, 2020
Verified Purchase
I am so excited this album has been reissued now every one can listen to his body of work🎧
Read more
Helpful
Comment Report abuse

Gene Nelson
5.0 out of 5 stars Like jazz?
Reviewed in the United States on June 11, 2020
Verified Purchase
This is it.
Extraordinary. Very creative and innovative.
One of my favorites.