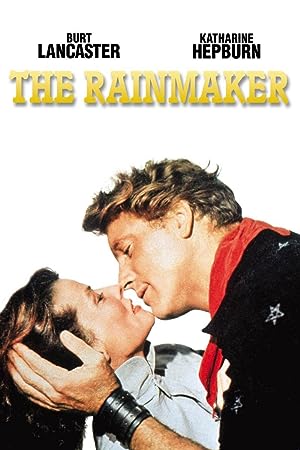 Elvin OrtizReviewed in the United States on February 28, 2020
4.0 out of 5 stars
A Nice Little Romantic Drama-Comedy
Verified purchase
This film is mainly drama; one feels that it may have played quite well in a theater. A story about a swindler (Burt Lancaster) and a woman, Lizzy Currie (Katherine Hepburn), who is at risk of remaining unmarried because she is an unconventional female. Her father and older brother struggle to marry her off while her younger brother is head over heels for a town girl. Taking advantage of a drought affecting their community, a swindler promises to bring rain and makes her father and brothers do absurd rituals while waking up Lizzy to self-admiration and respect. There is a short-lived romance between these two, but in the end, Lizzy stays with the local man she loved in the first place. The film is striking because of the great performances by Burt Lancaster (who loves to play against type), Katherine Hepburn, and Earl Holliman as the younger brother. It's a simple story, but there is not one line of dialogue that merits my disinterest, and as implausible the story may seem, the passions and troubles faced by these characters are quite genuine so that I can empathize for each one and even end up rooting for the swindler as the Curry family does at the end.
8 people found this helpful

KathieReviewed in the United States on December 23, 2017
5.0 out of 5 stars
Can he really make it rain?
Verified purchase
Kathryn Hepburn is great in this movie, as is Burt Lancaster. When a con man comes to her drought stricken area, Burt Lancaster has members of the household doing a number of idiotic things to "bring the rain". Yet, by the end of that long, hot evening, when the Law comes for him, they find themselves defending him and wanting him to get away based upon the emotional changes that have occurred, especially in Kathryn Hepburn's character, who considered herself an "old Maid". Great film includes many character actors. A must see film for Hepburn and Lancaster fans alike.
11 people found this helpful

NymeriaReviewed in the United States on February 21, 2021
5.0 out of 5 stars
Hurrah for movies of years gone by...
Verified purchase
You watch a movie like this and remember how one could be transported to another time and place...and never want to leave that time and place. The acting is superb! The story...(only one aspect) of how we often do not see our own beauty until the true image of ourselves in seen in another human being's eyes. The aching need to be something ... someone special is present in both Lizzie and Starbuck...and...well. No spoilers here! Buy it! Watch it! Be enchanted and save it for moments when you want to feel good about the world...about the potential for wonder and joy in yourself and our human family...and the magic of being alive...and the never-ending surprises of life, itself.
4 people found this helpful

D. SteinerReviewed in the United States on July 31, 2015
5.0 out of 5 stars
Hepburn and Lancaster in top form
Verified purchase
Broadway plays and musicals are often difficult to adapt. It's a choice, whether to almost duplicate the sets, as in Who's Afraid of Virginia Woolf, The King and I, and The Rainmaker, or to expand the venues as in The Music Man, Funny Girl, Hello Dolly and many more. The Rainmaker was made into a musical, 110 in the Shade, written by the pair who wrote The Fantasticks. It was just okay and not often revived. The Rainmaker has a small cast, takes place in just a couple of days and the setting could be any farm. It's essentially about change. A plain spinster and a snake-oil salesman who's never accomplished anything. How they change is the story. If you are a fan of either Hepburn or Lancaster and you've missed this, you're in for a treat.
10 people found this helpful

Lynn BullardReviewed in the United States on March 8, 2016
5.0 out of 5 stars
It reminded me how wonderful it is
Verified purchase
As magical as I remembered. I performed scenes from the play in high school drama. I saw the musical "110 In The Shade" about the same time and wore out the soundtrack that I had of it. My sister, who loves it too, gave me a copy of the stage play this Christmas. It reminded me how wonderful it is. It was, and still is, a wonderful play, story, movie and musical. If you haven't heard "110" try to. Many of the songs are word for word from the play. Will always LOVE all the folks in The Rainmaker, whatever form. Fantastic!
7 people found this helpful

JANA GAYLEReviewed in the United States on November 20, 2021
5.0 out of 5 stars
This is a fabulous love story!
Verified purchase
You can’t help but get caught up in the sadness of Lizzie’s dilemma, then cheer as she finds her way! Such a wonderful family story as they are all affected on different levels. Don’t miss it! You will be glad!

RomanReviewed in the United States on June 9, 2020
5.0 out of 5 stars
Classic performances
Verified purchase
Few are aware that this movie was not only great, but there were three special performances from beginning to end, one special performance providing young actor, Earl Holliman a Golden Globe Award, and an Oscar nomination for Best Supporting Actor.

Lawrance BernaboReviewed in the United States on October 15, 2000
4.0 out of 5 stars
One of Katharine Hepburn's Oscar nominated Spinster roles
Verified purchase
On a drought-plagued farm somewhere in the southwest, spinster Lizzy Curry (Katharine Hepburn) has finally given up on ever being married, although her family wants to make one last effort with File (Wendell Corey), the local lawman. Into their lives comes the fast talking con man Starbuck (Burt Lancaster), who promises that he can make it rain for $100. More importantly, he can see the con job that Lizzy has played on herself and before he rides out of town he will have redeemed not only the shy spinster but himself.
Katharine Hepburn was well into her period of playing spinsters by the time she made this 1956 film with Burt Lancaster. The idea of Hepburn and Lancaster making a film together is interesting since they had totally different approaches to the acting craft. Hepburn would have the entire script memorized before shooting began whereas Lancaster preferred to learn his lines the night before. This is one of those films where the Bryn Mawr accent of the leading actress works against the character, but then the whole idea of Hepburn playing a rube--with costumes by Edith Head no less--is a bit of a stretch to start. Lancaster really sinks his teeth into the role of the charming mountebank Starbuck. Cameron Prud'Homme, Earl Hollliman and Lloyd Bridges play Lizzy's worried father and brothers, and it is they who really give the film its sense of life out on the farm more than the sets and scenery.
Based on N. Richard Nash's play, the film was directed by Joseph Anthony, who had directed the stage version starring Geraldine Page (presumably an attempt to duplicate the success of Elia Kazan in moving from Broadway to Hollywood). The story is still produced by community theaters as the musical "110 in the Shade." Hepburn received her seventh Oscar nomination for Best Actress for "The Rainmaker" (the winner that year was Ingrid Bergman for "Anastasia"), but the role of Lizzy Curry is not one of best performances. Certainly Lizzy is becoming desperate, but Hepburn gives those scenes too much of an edge. In her earlier films this worked quite well, most notably in "Alice Adams," but in as a mature actress Hepburn was much more successful in underplaying the desperation of her spinster characters, as such did superbly the previous year in "Summertime." This may well be one of those regards in which it is simply difficult to separate the actress from the role. However, in her strongest scenes she certainly brings dignity to the frightened spinster, and in the end you understand why she would actually pick Wendell Corey over Burt Lancaster.

15 people found this helpful
See all reviews
Back to top
Get to Know Us
Make Money with Us
Amazon Payment Products
Let Us Help You
EnglishChoose a language for shopping. United StatesChoose a country/region for shopping.
© 1996-2021, Amazon.com, Inc. or its affiliates