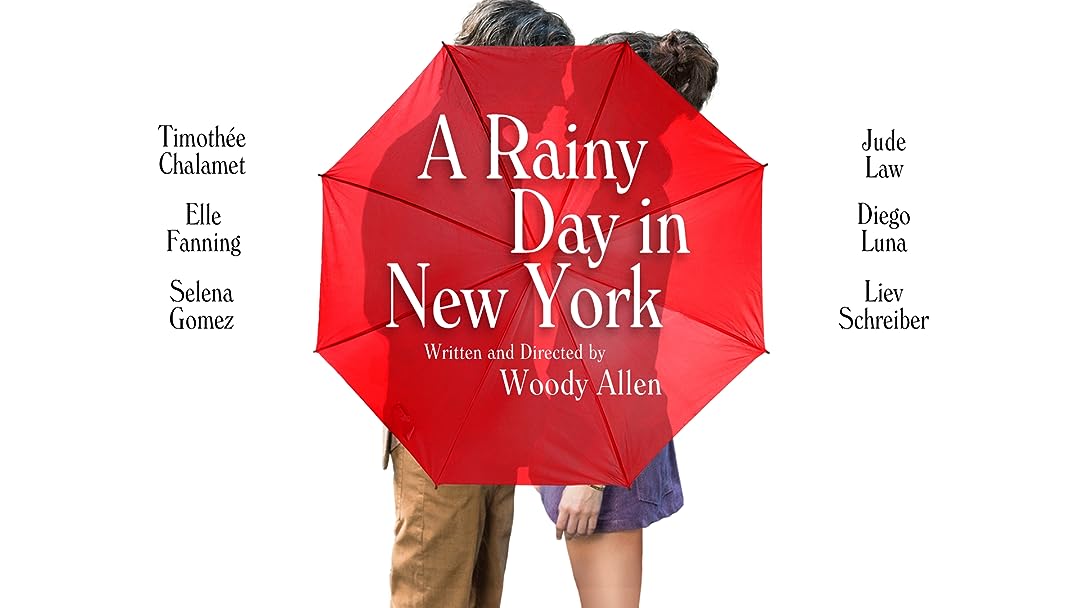 A Rainy Day in New York

(4,682)
1 h 32 min2020X-Ray13+
Woody Allen returns to the romantic fields of previous hits Vicky Cristina Barcelona and Midnight in Paris, assembling an all-star cast including Timothée Chalamet, Elle Fanning, Selena Gomez, Jude Law, Diego Luna and Liev Schreiber, for a charming, comedic tale set amidst the dizzying streets of The Big Apple, as romantic weekend plans are soon dashed as quickly as the sunlight turns to showers.

Kristine S. WoeckenerReviewed in the United States on August 13, 2020
5.0 out of 5 stars
Really Funny and Romantic
Verified purchase
I am thrilled to have finally gotten to see this film, what with the unfair shunning of all things Woody Allen by the trendier-than-thou PC morality police. (Woody is innocent!) Anyway, the film has really good writing, with a lot of laugh-out-loud funny lines. Elle Fanning is charm itself and could not be more engaging; Selena Gomez is delightful; Timothee Chalamet is great, as is all of the rest of the cast. The film is fun and interesting and romantic. On first viewing, I was more critical, but second viewing reveals the wonderful qualities of this movie. This is definitely going on my favorites list.

As to the German Blu-Ray, it plays on U.S. players. Subtitles can be turned off with the remote "Subtitles" button; the menu only has the choice of German or English with German Subtitles.

But man, did I laugh. For me, the experience of this film was something like the experience of Manhattan Murder Mystery. The plot was interesting and kept me paying attention, and then every couple of minutes, in a flash, someone's words would register and I would just burst out in a loud laugh.

It makes the non-Woody-Allen people look at you, puzzled. But there it is.

JamesReviewed in the United States on December 6, 2020
1.0 out of 5 stars
Do your research on Woody Allen before considering supporting this film
Verified purchase
Really disappointed in myself for not having looked up Woody Allen's history and sexual allegations of his daughter against him. Most of the actors have publicly vowed to donate their salary from the film to RAINN after this was resurfaced and honestly not sure where I missed that in the news. Also disappointed in Amazon for continuing to stream the movie after all. AND if that doesn't convince you, I got through 30 minutes of the movie and honestly don't know how I made it that long as it is dry, completely unrealistic, and really has no point at all. If I could give negative stars for feeling like I've been depraved of my previous time, I would.
85 people found this helpful

Timothy Tynan Amazon CustomerReviewed in the United States on March 19, 2021
1.0 out of 5 stars
A Dreadful, Charmless Mess
Verified purchase
Sometimes there’s no dignity in a director's working too far past his prime. If Charlie Chaplin kept on making movies after “A Countess from Hong Kong,” they would likely have come off as creaky and crudely dated as Woody Allen’s last several films., and just as embarrassing as this one, a disaster on so many levels – the directing, the acting, and especially the writing. This script seems to come from someone too isolated, too old, and too short on actual experience to know how we live today. And Allen certainly doesn’t know how we talk. That’s because Allen isn’t really that inventive a writer; he simply recycles the sentimental plots and characters from the films of his youth. He weaves antique twists and plot points into his scripts like those quaint old jazz tunes that decorate his soundtracks. Every single actor with a speaking part humiliates him or herself in this film. They flay around, delivering Allen’s ghastly, over-written lines and degrade themselves as result. When an actor disappears from the story, as many do, it’s a merciful escape. But the damage is already done. We don’t miss them, and we shudder when a few of them return. Those who must reappear, because the hold the plot together, subject themselves to another round of degradation. Timothee Chalamet, the Woody Allen stand-in here, becomes more reprehensible with each reappearance. But poor Elle Fanning, a remarkably game actor, does the best she can in a role designed to mortify her in every scene. How I despised Woody Allen’s mean-spirited treatment of her character! Nothing about the background of this vacuous dimwit, who somehow made it from arid plains of Arizona to a prestigious private college in Upstate New York, makes psychological or even sociological sense. Allen wants us to share in his revulsion towards the character, but he overreaches to such a bullying extent that I was actually pulling for her throughout.

Allen has famously made a few films in Europe, but travel hasn't broadened his sensibilities or made him any more of an artist. His well-publicized confinement to his Manhattan home base has only deepened and made off-putting his New York chauvinism. His script here never wastes an opportunity to say something disparaging about Arizona or any community beyond his own shrinking society. Snobbery can be forgiven, even pleasing, if it’s delivered with conspiratorial wit. But there is no real wit in these anti-rube jabs – just oafish bigotry. And old age seems to have increased Allen’s bitterness towards hyper-Wasp characters, particularly women, maybe because he knows them only as the tony types who appeared to him in the movies of his youth. In my mind, Cherry Jones, playing Chalamet’s ultra-patrician mother, will never recover from that disastrously hokey self-disclosure scene with her son. It is designed to provide the Chalamet character with a bump to his emotional development. But her revelation is the kind of plot twist that only the dullest or most derivative imagination could come up with, the kind that gets a callow student author laughed out of a writer’s workshop.

Allen is at his best in interviews, where he is shockingly honest and accurate about his achievements. By his own admission, whatever ambitions he sought as a filmmaker remained far from fulfilled in even his best reviewed films. Despite this, I’ve enjoyed many of his pictures and revisit them often. But I felt no joy in this one and take no pleasure in acknowledging that this charmless and inept film has convinced me that Woody Allen is a filmmaker in serious decline – too old, too out of touch with life, and perhaps too bitter to produce anything humorous, fresh, or believable.
Chaplin knew what to do when he reached this point. And it saved him from further humiliation and preserved his legacy. But with “Rainy Day in New York,” and a few before it, Allen has gone beneath his nadir. Whatever legacy he earned may be well past preserving.
62 people found this helpful

MReviewed in the United States on November 12, 2020
4.0 out of 5 stars
Classic Woody
Verified purchase
Perfectly enjoyable. Too bad Amazon cancelled Allen. I hope he made a lot in the settlement.
73 people found this helpful

Duane PooleReviewed in the United States on August 11, 2020
2.0 out of 5 stars
Disappointing Effort from Woody
Verified purchase
A very tired rehash of old Woody Allen themes and characters. I was so looking forward to this and it kind of broke my heart. Feels like he’s filming first drafts of his scripts these days, tossing them off without much care. How I miss his classic touch!
55 people found this helpful

NibbledtodeathbyDucksReviewed in the United States on December 3, 2020
3.0 out of 5 stars
This Is A Tough One
Verified purchase
The light you'll find during a rainy day in New York is gorgeous and varied, from time of day, time of year, location -- the view from the bus heading downtown toward Times Square is a whole different kind of amazing than the light in Central Park during a hastened dusk, but amazing, just the same. If anyone, ANYONE, should capture this, you'd say it's Woody Allen. So imagine how I feel about cab conversations on a rainy day with sun coming in the windows and, what, someone with a union card hitting the cab with a hose spray?

There are some bright spots here and there, but I feel that the heart, not the mind, has gone out of Allen's work, and that's what infuriates me. He's been put through a hell he didn't deserve, he has been unjustly targeted by a sick mob that makes the bunch from Frankenstein look like a Friendship Day parade, and it has taken its toll. I find the performances here a little uneven, a little cartoony, in places, playing to stereotypes at times instead of flesh and blood, but God bless each and every one of them for thinking for themselves and working with whom they want to work, despite the "woke" pitchforks and heads that spin on their necks and spew kombucha.

I would recommend, though, that anyone interested in Allen and his oeuvre see this, when you have an artist with an estimable body of work, everything is worth seeing and considering. It's what intelligent, educated people do, how they learn, how they advance a culture. We also need a vaccine against savage ignorance, and unlike others, this one is within the grasp of every individual, should they choose to do so. Choose to do so.
32 people found this helpful

gdavisloopReviewed in the United States on December 23, 2020
5.0 out of 5 stars
All the men are Woody!
Verified purchase
I've been watching Woody Allen's movies for 50 years ("Sleepers" was my first), and frankly, many of his mid-period and most recent movies have left me only luke-warm. Although "A Rainy Day in New York" sounds superficially like his last few movies, it is much funnier (although not really laugh-out-loud), and the characters are much quirkier.

The most amusing aspect is not just the context of this movie, but the feeling that Allen has remade his early films (think "Annie Hall" with a completely new generation of actors - really, two generations removed from back then.

I also love how he's integrated new technology - smartphones and HDTV have replaced payphones and a 16mm movie projector - with the same quirky style that made him beloved from the beginning.

And who is playing Woody? Well I'd have to say ALL the men - Timothee, the sullen director, and the cuckolded writer, all seem to be playing his classic neurotic loser. In fact, when Timothee's girl said the word "Asperger's" - a biological form of neurosis that Woody wouldn't have known about when he developed his early character - I just had to stop watching and write this review!

And picking up now that the movie is over, I'll close by saying, this is one of Timothee Chalamet's best films - if not the best! Never before have I seen two artistic geniuses, 60 years apart, create such magic together - Woody's words with Timothee's presentation is a match I've waited my whole life to see!

And yet, not to oversell it, this is a very minor film - a "film about nothing" as Seinfeld might say. But what a glorious nothing it is!
25 people found this helpful
See all reviews
Back to top
Get to Know Us
Make Money with Us
Amazon Payment Products
Let Us Help You
EnglishChoose a language for shopping. United StatesChoose a country/region for shopping.
© 1996-2022, Amazon.com, Inc. or its affiliates