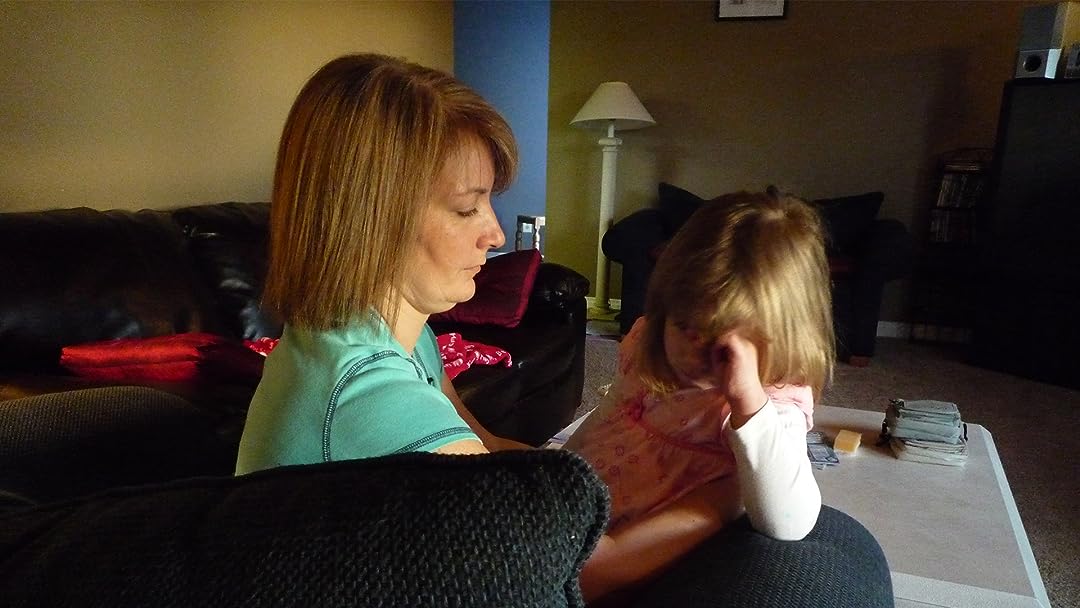 (32)
48min2010ALL
Follow 4 families raising children diagnosed with Bipolar Disorder - a single mother whose son Chase has been hospitalized 6 times; a grandmother raising 4 kids diagnosed with Bipolar Disorder, a little girl, Samantha, who was diagnosed at age 3, and Kelsey, a courageous pre-teen who heroically manages her moods, even as she faces the intensifying social pressures in school.

Amazon CustomerReviewed in the United States on December 31, 2019
2.0 out of 5 stars
Incomplete
Verified purchase
I realize that this documentary can't cover everything, but there's a backstory to the "childhood bipolar" diagnosis that people should be aware of. Before the early aughts, virtually everyone in the psychiatric establishment believed that you couldn't diagnose BP until the person was an adult, or at least in later teens. Then one Dr. Joseph Biederman suddenly started making the rounds telling everyone that childhood BP was a real thing. Kids started being diagnosed at 2, 3, 4 years old. There was a veritable explosion of BP diagnoses among kids.

So what changed? Well nothing changed about the kids. Biederman had massaged the data and created a dubious diagnostic tool to promote not only the diagnosis, but the use of a particular antipsychotic medication in these kids. Later it was discovered that he was receiving millions in undisclosed kickbacks from the drug manufacturer. People started questioning this wave of BP diagnoses among kids, and a lot of practitioners have returned to believing that this is not a diagnosis to be made among children. I won't argue that it doesn't exist at all, but I think there are good reasons to be skeptical of how often it's diagnosed in light of the history -- which was entirely profit-driven rather than based on any real advancement in science.

This is what really stood out to me when the grandmother was told that all four kids had BP. This is so unlikely as to be almost certainly untrue. It is the height of psychiatric hubris and laziness. And it reminds me, as someone else pointed out, about how much psychiatry can resemble new age spirituality more than it does science (or medicine).

Now, is that to say that there's nothing wrong with these children at all, or that they all would get better if taken off of the drugs. It could very well be that the drugs "work," although with an antipsychotic a big part of it is always going to be sheer sedation. But the sloppy overdiagnosis of BP, especially among kids, is worrisome. Particularly considering how parents like to watch a documentary and then start wondering if their child has it too... after all, it would explain all those temper tantrums, right?....

LATEACHER1XReviewed in the United States on December 16, 2019
4.0 out of 5 stars
Why aren't these kids/parents receiving behavior therapy?
Verified purchase
I have over 25 years of experience working with children who have been diagnosed with autism and bipolar disorders and have learned a few things over the years. First of all, never, ever get into a power struggle with the child. If he/she doesn't want to do something (like put her socks on), let it go. Just say "ok" and walk away. Don't ever ask them "why" they did something (like hit). Don't physically restrain a child. Most of these kids have learned these negative behaviors. You need to set clear and CONSISTENT boundaries, and give them lots of love. I noticed that several of these kids were adopted and having worked with kids who are growing up in foster homes, I noticed that they were very insecure and needed extra love and hugs. I'm not suggesting that there isn't a genetic cause or chemical imbalance, but behavioral intervention and strong parenting skills will help. Doctors and medications cannot "fix the problem". It is a lot of work and unfortunately, many parents are not up to the challenge. I strongly believe that behavioral interventions and classes for parents with special needs children should be a major part of the therapeutic plan. All too often, many of us look for a quick fix (like medication) . It takes patience, hard work and lots of love, love, love to effect real change. and I cannot stress the importance of consistency, as well as calm but firm discipline. The adoptive parents have no idea what these kids experienced in the womb or shortly after they were born. Adoption workers should also make sure that adoptive parents are made aware of familial mental illness and that the new parents are up to the challenge. The grandmother is right! Her grandkids can overcome these issues with her love and support but it will take time with lots of ups and downs. The kids have had years of neglect during their formative years which will require much time for healing. I say, "never give up" and trust your instincts. Always remember that psychiatry is not even a science, much less an exact one.
34 people found this helpful

Terresa AndersonReviewed in the United States on April 8, 2020
5.0 out of 5 stars
Excellent Documentary
Verified purchase
I thought this was a very realistic look at bipolar's littlest victims. My youngest brother and I are both bipolar, but neither of us was diagnosed until well into adulthood. (30's & 40's) One of the reviewers for this documentary seemed to think that medication is an "easy fix" and you basically need to try harder with things like behavioral modification. Frankly, I was insulted by their comments. People suffering from bipolar, and their families, are ALREADY trying harder than any "normal" person! And NO amount of psychological therapy is going to "fix" bipolar, help yes, but fix no. My heart goes out to these families and I pray that they find the right medications (and doses) to live their best lives. I've been on the same medication now for 15 years and it's been life changing! My brother's doctor tried him on many different medications and finally put him on the same meds that I take. I'm happy to report that he is doing so much better. So hang in there, all of you who are affected by this disorder. You are not alone!
19 people found this helpful

MJCReviewed in the United States on March 27, 2021
2.0 out of 5 stars
Information seems biased and outdated
Verified purchase
This "documentary" is 11 years old and since then there is a new child psychiatric diagnosis called DMDD- Disruptive Mood Dysregulation Disorder that some children who might have been diagnosed with Bipolar could now be classified as. The documentary was only 40 minutes long, and does not present opposing information, research, brain scans or alternative viewpoints, treatment methods. It seems biased toward medicating children.

I agree with another reviewer here, that its pointless to ask a pre-schooler why she hit another child. It seems that some work could be done with behavior therapy, but do we know if this route was already taken or not? No. There is not any history or depth in this documentary regarding treatments that have already been tried with these children.
These families deserve all the credit for putting themselves out there and they seem to want to help bring awareness to other families who may be struggling. I feel for these kids and now that it is 11 years after the release it would be nice to see an update and if they are doing well. This documentary seems like its a pilot for a reality show or something, its enlightening and heartbreaking to see what some families and children struggle with, but it doesn't seem very educational-like something you might find on NOVA.
13 people found this helpful

NitaReviewed in the United States on October 26, 2020
1.0 out of 5 stars
Something is missing
Verified purchase
I wish they would have interviewed some minority families as well. Unfortunately most minority kids get labeled as deviants and monsters when they act out due to the effects bipolar disorder. Unfortunately most don't find out their diagnosis until after expulsion or incarceration. Bipolar disorder is a terrible disease. I wish all that all who suffered from it had the same care and concern shown.
14 people found this helpful

Martin ClearmanReviewed in the United States on February 6, 2019
4.0 out of 5 stars
can relate to them in the movie
Verified purchase
I am severe bi-polar and unable to work. I am on social security since I'm disabled. I was about 15 years old when the bi-polar hit me and was an extreme struggle to survive for me and my family. I am now a very secure and stable 57 year and have no problems with bi-polar as long as I take medication. The little kids having bi-polar is so hard on the family and makes me remember when I was young and the times I yelled and lost my temper. Bi-polar is an awful diagnosis and I do not wish it on anyone. Hope something I said helps someone.
24 people found this helpful

Tee SkyReviewed in the United States on April 19, 2019
1.0 out of 5 stars
Misdaignosed
Verified purchase
These children CLEARLY have gut and toxicity issues. Have the parents changed their diets? Has gluten, dairy, and other food allergens been eliminated? Have these children been tested for lead, mercury, and aluminum levels? No, they are being OVERLY drugged by big pharma who will convince you this is genetic. I was one of those mothers who had a child with mood issues. We altered his diet, healed his gut, avoided vaccines and other toxins, AND HE RECOVERED. But go ahead and drink the medical mafia's kool aid.
22 people found this helpful

Kiki JoReviewed in the United States on September 27, 2018
5.0 out of 5 stars
Heartbreaking
Verified purchase
My older brother suffers from bipolar schizophrenic disorder and wasn't diagnosed until he was an adult. Every doctor just told us he had ADHD and never really listened. Watching these children was so heartbreaking for me because I remember my brother going through the same things and not knowing how to help him. I cried while watching this entire documentary and I'm so glad these families actually got the help they needed.
15 people found this helpful
See all reviews
Back to top
Get to Know Us
Make Money with Us
Amazon Payment Products
Let Us Help You
EnglishChoose a language for shopping. United StatesChoose a country/region for shopping.
© 1996-2022, Amazon.com, Inc. or its affiliates