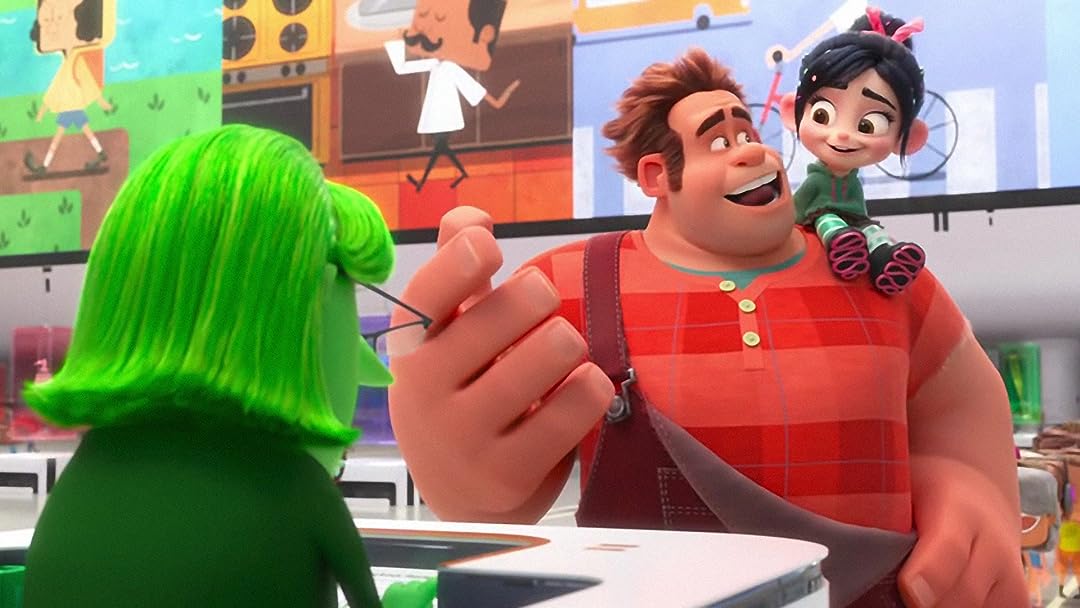 (11,351)7.01 h 52 min2018X-RayPG
In Disney's Ralph Breaks the Internet Ralph and Vanellope risk it all by traveling to the world wide web--which may or may not survive Ralph's wrecking.

Movie NerdReviewed in the United States on November 24, 2018
3.0 out of 5 stars
The First is Way Better
While it’s an entertaining movie it gets a bit too deep by the end. The first was a great tribute to video games. While having a touching story about friendship. This film seems to only exist to teach a lesson and is less fun.
This film feels like it was only made to teach kids about feminism and to be nicer while commenting on the internet. As well as to be a less clingy and controlling friend, I guess. Also about how men aren’t as needed as they think. While forgetting what made the first one good.
The plot of the original was a more fun and focused story of friendship. Ralph Breaks the Internet is a bit all over the place. While it never felt like something I’d want to watch again and again. The first will remain a favorite of mine though.

JReviewed in the United States on February 16, 2019
1.0 out of 5 stars
Disney Ruins Everything.
Verified purchase
(SPOILERS) The first half of this movie was pretty amazing actually. I really enjoyed seeing all the characters and the way the internet was displayed to their world was really creative, entertaining, funny and nostalgic. The story was great and they had a real adventure that seemed to lie ahead of them. Then halfway through the movie something really bad happened. It felt like they changed directors or some accountant got a hold of the script and changed EVERYTHING for the worse.

THEY WENT TO DISNEY LAND! Come on. Can we create a less obvious commercial? None of it fit the story line and took the movie into a direction that was half baked and forced. No cool video cam cameos, just more Star Wars and Disney Princesses. The internet never really breaks and it's barely Ralph thats even responsible for what does break. Should have been called "Ralph (briefly) breaks a fake youtube. Way to go Disney. Oh and thanks for another terrible princess song, like we needed that. What a waste of 20 bucks.

Here is the line in the movie that defines what it is all about. It happens in the room with all the "princesses." They are trying to determine if Penelope is a princess.

"And now for the million dollar question: Do people assume all your problems got solved because some big strong man showed up?" She says "yes, what's up with that?!" To which they then reply "she IS a princess."

AndrewReviewed in the United States on February 13, 2019
1.0 out of 5 stars
Don’t waste your money
Verified purchase
Not what I expected, the first was fun and brought back memories for video games. This was weird - story all over the place and rather than having a good plot it was just preachy about life lessons that not everyone may agree with. I didn’t enjoy it and neither did my kid.
73 people found this helpful

Michael A LoughReviewed in the United States on February 17, 2019
1.0 out of 5 stars
One of the worst new releases.
Verified purchase
One of the worst Disney movies ever. Never laughed and my child fell asleep. They were so busy trying to make their statements and build a commercial for Disney, they forgot to actually write a story line. Don’t waste your money or time.
44 people found this helpful

Kevin V.Reviewed in the United States on February 28, 2019
1.0 out of 5 stars
What happened to Ralph?? This was not him.
Verified purchase
It seems this whole movie is out to undo whatever damage was caused by Ralph being a hero in the first move - Ralph is no longer a selfless person with morals, he is now a co-dependant feeble chump who makes stupid decisions - as if Ralph would unleash a virus after seeing a virus almost devastate the whole arcade in the first move. Not to mention the fact that Ralph is condescended and emasculated almost at every minute.

I have no problem with strong female leads - but it is Ralph's movie and it seemed you robbed the title hero to give it to someone else. I have no problems with what Vanelope wanted to achieve, but the character choices of Ralph are far separated from the first move. This movie was a movie to push a point, not tell us a story.
41 people found this helpful

pistol007Reviewed in the United States on February 15, 2019
5.0 out of 5 stars
Great movie for kids and adults alike!
Verified purchase
If you bought this right when it came out on digital (like we did, the MOMENT is was released because my kids couldn’t wait another second longer), you would have noticed that there was an issue in the first two minutes of the stream. I assumed amazon would notice it and fix it immediately, which they did, but it didn’t bother me just having to fast forward two minutes to the start of the movie (although it took me a little bit to figure out what was going on). It’s a bummer people are giving this lower stars because of it, because it was fixed immediately. All that being said, this movie was super cute! A good message about friendship and life changes, and also introduces the concept of the internet in a funny and educational way for children and adults alike. I found it to be better than the first Wreck it Ralph, which I didn’t think was possible. Love it!
35 people found this helpful

Chelle AReviewed in the United States on February 12, 2019
4.0 out of 5 stars
They fixed it! Do not buy the prime video unless you forward it 3 mins
Verified purchase
Looks like they fixed the file! They heard us!

Cute movie once you get past the first 2+ minutes of ear damaging noise & then a black screen. The screen is making some kind of emergency alert sound in the very beginning for way too long my son is autistic so this bothered him so I fast forwarded the first few mins. Overall cute movie once you get past it. Do not recommend for sensitive ears or kids with sensory problems. Amazon needs to fix this file for sure then I saw some odd screen with text all over it like it was a bootleg copy I just paid $20 for.
31 people found this helpful
See all reviews
Back to top
Get to Know Us
Make Money with Us
Amazon Payment Products
Let Us Help You
EnglishChoose a language for shopping. United StatesChoose a country/region for shopping.
© 1996-2021, Amazon.com, Inc. or its affiliates