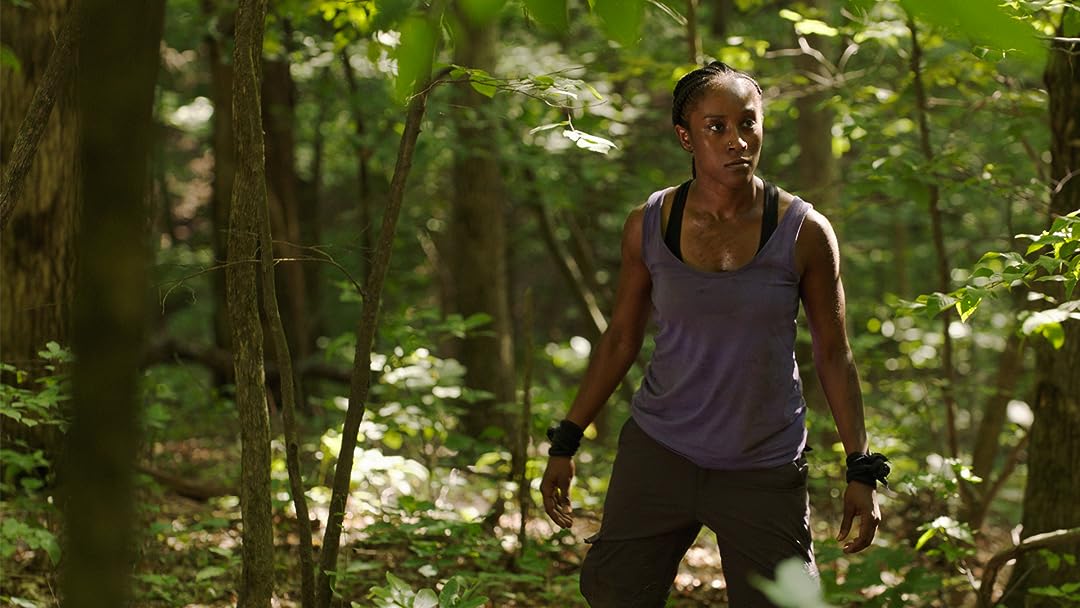 (3,342)
4.61 h 51 min2019X-Ray16+
A woman hiking an isolated trail runs into trouble when her pack is hijacked by two men hiding out in the woods, desperate and on the run. Now, stranded and left to fend for herself, she has a choice: crawl back to her normal life in defeat, or strike back and retrieve what was stolen from her.

Joseph FigueroaReviewed in the United States on September 19, 2021
3.0 out of 5 stars
All these ridiculous reviews
Verified purchase
I understand writing a review stating that you fell asleep from boredom, but these critiques where you obviously didn't watch or understand the movie are ridiculous. SPOILERS AHEAD. So you didn't like her coach, you mean her dad? It's revealed that that was her dad. Or how she should have just left the backpack - when she was in the middle of an eight day survivalist hike and it was her only source for food and water not to mention that it also contained her late father's ashes. Finally, to the ones who are like 'they took her stuff, tied her up, and didn't even rape her.' Wow, there's a lot to unpack there, consider for a moment that you didn't just think that, you actually felt the need to type it out as a possible plot hole.

That said it's an okay 3 to 3.5 stars. My problem was mainly her character, closed off and treating her family so poorly made it hard to like her. I didn't get the segue from Olympic hopeful to survivalist runner and the whole scene with the cop made no sense because the three of them already knew the drugs were long gone. Outside of that it was just okay, the acting wasn't bad, it held my interest, and it wrapped.

Ian R HoweReviewed in the United States on October 29, 2020
1.0 out of 5 stars
Don't waste your money. This is crap!!! This is ZERO star
Verified purchase
Nothing is believable. A girl in the forest, alone, gives her knife to 2 perfect strangers? What do expect to happen? The tough guy uses words like rustle, and speaks with perfect grammar in long monologues. Two guys never do anything sexual to the girl. She spits in the tough guys face and he gives her a stern look. Really?! That's your tough move? The tough guy is afraid to touch her breasts when he grabs her. The blood is so bright it almost glows. The girl moans and groans to make us believe she's struggling whenever she moves. People are out of breath when they aren't moving to make us think there's action. The only good part of the movie is the scenery. Don't waste your money. This is crap. Spend your money visiting a park and hike.
17 people found this helpful

mlReviewed in the United States on October 11, 2020
1.0 out of 5 stars
Common Sense Lost
Verified purchase
No plot... Not suspenseful... Just a girl with mental problems. It was over for me when she put her hands in the fire to burn the shoelaces off of her tied hands. She could have untied it with her teeth or even gotten the knife that was thrown into the woods. This girl had NO survival training yet she went into the woods for days at a time to run and with a day pack. I think she had PST from her track coach pushing her too hard. Oh, and the faces she kept making... This could have been such a good movie but fell VERY short. "Are you going to tell people you fell down once and gave up?" Ugh! I never want to hear that again...
18 people found this helpful

Sandra L. GulliverReviewed in the United States on September 12, 2020
5.0 out of 5 stars
Worth the price of admission
Verified purchase
This is a great scary story with the inevitable twist at the end. I think all the actors were spot on with their roles and gave believable performances. Because it's an indie film, I had to wonder if they all did their own stunts, because some of them required some sure fire athleticism. Good job on that! There was one string left untied at the end, and it didn't cross my mind until a few days later, and for that matter doesn't alter the story any, but I wondered about the sister.
All in all, this is a top notch thriller story, and I feel it can compete with any studio production and proves that quality films can be made in Chicago, by Chicago producers and Chicago actors.
18 people found this helpful

Amazon CustomerReviewed in the United States on September 28, 2020
4.0 out of 5 stars
Good movie with strong actress lead
Verified purchase
Lead actress was really strong and carried film well. I liked seeing a strong black female lead who was believable. I also appreciated that they didn't have to cheapen this film by resorting to physical abuse sexual assault or nudity while she faught her way through to the end. Good solid movie to enjoy on a Sunday afternoon.
18 people found this helpful

Alba GonzalezReviewed in the United States on September 9, 2020
5.0 out of 5 stars
Best thriller I've seen in a long time!
Verified purchase
As young Mel struggles to keep her father's demand, she'll soon realize he has given her the tools necessary to survive.
A definite rollercoaster of emotions, this thriller will keep you hooked from beginning to the end.
15 people found this helpful

WALTReviewed in the United States on September 3, 2021
5.0 out of 5 stars
AN EXCITING AND UNUSUAL FILM
Verified purchase
IN OUR STORY A YOUNG TEEN GIRL INJURES HER LEG WHILE PRACTICING TRACK RUNNING. SHE SEEMS DEFEATED. BUT, HER COACH COMES OVER AND TELLS HER THAT HER BODY DOES NOT COMMAND THE MIND, JUST THE REVERSE. SO SHE GETS UP AND RUNS. YEARS LATER, WHILE DOING CROSS COUNTRY RUNNING WITH A BACKPACK, SHE IS ATTACKED BY TWO MEN WHO TAKE HER PACK AND TIE HER TO A TREE AND LEAVE HER. SHE INJURES HER LEG BUT MAKES IT TO A RANGER STATION. I WILL NOT SAY MORE, BUT THE MOVIE IS QUITE EXCITING.
IT IS ON PRIME AND IS EXCELLENT. ENJOY.
4 people found this helpful
See all reviews
Back to top
Get to Know Us
Make Money with Us
Amazon Payment Products
Let Us Help You
EnglishChoose a language for shopping. United StatesChoose a country/region for shopping.
© 1996-2022, Amazon.com, Inc. or its affiliates