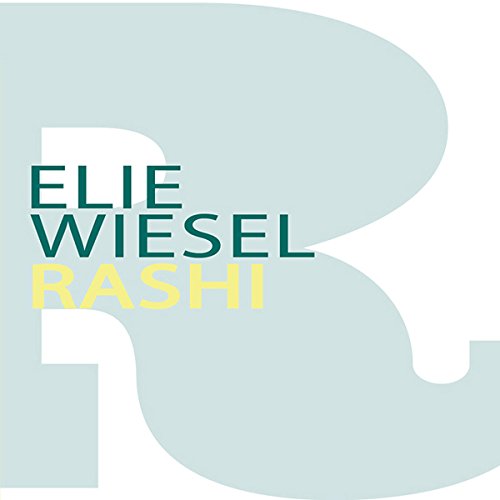 From Elie Wiesel, winner of the Nobel Peace Prize, comes a magical audio book that introduces us to the towering figure of Rashi—Rabbi Shlomo Yitzchaki—the great biblical and Talmudic commentator of the Middle Ages. Wiesel brilliantly evokes the world of medieval European Jewry, a world of profound scholars and closed communities ravaged by outbursts of anti-Semitism and decimated by the Crusades. The incomparable scholar Rashi, whose phrase-by-phrase explication of the oral law has been included in every printing of the Talmud since the 15th century, was also a spiritual and religious leader: His perspective, encompassing both the mundane and the profound, is timeless.

Wiesel’s Rashi is a heartbroken witness to the suffering of his people, and through his responses to major religious questions of the day we see still another side of this greatest of all interpreters of the sacred writings. Both beginners and advanced students of the Bible rely on Rashi’s groundbreaking commentary for simple text explanations and Midrashic interpretations. Wiesel, a descendant of Rashi, proves an incomparable guide who enables us to appreciate both the lucidity of Rashi’s writings and the milieu in which they were formed.

Your audiobook is waiting!
Learn more about membership
List Price: $17.49
You Save: $2.54 (15%)
By completing your purchase, you agree to Audible’s Conditions Of Use
Sold and delivered by Audible, an Amazon company

Happy bookworm
3.0 out of 5 stars Food is Terrible - and Such Small Portions
Reviewed in the United States on June 27, 2012
Verified Purchase
My knowledge of Judaism is modest but my emotions about it run high, so this is definitely not a scholarly review but a rather emotional one.

I read the "Maimonides" book by Sherwin Nuland and "Betraying Spinoza" by Rebecca Goldstein, and thrilled with the quality of material, had high expectations for the "Rashi" book. So much so, that I practically hovered on the doorstep, waiting for the Amazon delivery.

And this is what I got! This!? I tiny book, which is neither a good introduction to the whole topic, nor a treatise on one aspect of it. The book does not have any structure, but consists of free-form musings on the subject of Jewish predicament during the time of Rashi and seemingly random points about his work.

To get this tiny booklet from an accomplished writer, like Mr. Wiesel, was a shock. I kept looking at the back of the book, hoping to find something more.

But, outraged as I am with the flimsiness of Mr. Wiesel's oeuvre, I am also charmed with its emotional impact. The book is a love letter to Rashi and a condolence letter to the Jews that suffered so much and so often. Letters are most effective when brief.

I can hear the wide-eyed boy in
"Sometimes, in my small towm, it seemed to me that Rashi had been sent to earth primarily to help Jewish children overcome loneliness.
And Fear."

And my heart catches in pain for all those Jewish children in pre-war European towns. Which does not have much to do with Rashi but makes me want to know more about him.
So the book is also a tease, in the best sense of the word. Just like Wiesel says,
"...the student should withhold questions that the Teacher might not be able to answer, and then seek a new Teacher."

Since my chief complaint about the book is its brevity, I am giving it 3 stars and closing with a Woody Allen joke,"uh, two elderly women are at a Catskills mountain resort, and one of 'em says, "Boy, the food at this place is really terrible." The other one says, "Yeah, I know, and such small portions." "
Read more
11 people found this helpful
Helpful
Report abuse

William Carpenter
VINE VOICE
5.0 out of 5 stars Rashi - 900 Years Later
Reviewed in the United States on August 27, 2009
Verified Purchase
Rashi is famous for his commentary on the Talmud, the first choice of students struggling with talmudic texts for nearly 900 years. Rashi is an abbreviation for Rabbi Shlomo Yitzhak who was born in 1040 and died in 1105 in France. Elie Wiesel, famous for his writings on the Holocaust and a recipient of a Nobel Peace Prize, is descended from Rashi.

In this book we get a brief biography of Rashi, a number of examples of his commentary on Genesis and other parts of the bible, and some very interesting examples of Responsa, Rashi's responses to questions sent to him from Jewish communities throughout Europe. These reveal a lot about the gentle character of this famous rabbi.

The book ends with a really interesting description of how the first Crusade impacted Rashi and the Jewish communities in medieval France and Germany. The Crusades, first urged by Pope Urban II in 1095, resulted in the deaths of many Jews caught in the path of these armies. The parallels to the Holocaust in Europe in the 1940's are obvious and painful to consider.

Elliot Chocron
4.0 out of 5 stars Light Introduction to Rashi
Reviewed in the United States on November 20, 2009
Verified Purchase
I specifically chose this title as an introduction to Rashi, knowing that it would not be a full biography. Having said that, other titles in the series have gone in to more depth about the subject's background and influence (especially if background information is sparse, as with Rashi). Overall I enjoyed it but had to continue on to other books about Rashi to get a better feel for his influence.
Read more
5 people found this helpful
Helpful
Report abuse

Carl L. Baines
5.0 out of 5 stars Rashi
Reviewed in the United States on April 22, 2014
Verified Purchase
I have read it already. Just a great book. I ordered another book from this series and I will probably read several in this series.
Read more
Helpful
Report abuse

Bert Berson
5.0 out of 5 stars Five Stars
Reviewed in the United States on April 20, 2018
Verified Purchase
My appreciation for Rashi was greatly expanded by this book.
Read more
Helpful
Report abuse

Girl from the North Country
5.0 out of 5 stars Five Stars
Reviewed in the United States on May 17, 2015
Verified Purchase
Incredible look at the great sage Rashi and his life and wisdom by another great sage, Eli Wiesel
Read more
Helpful
Report abuse
See all reviews

Mrs. Nuala Wainwright
3.0 out of 5 stars Too short!
Reviewed in the United Kingdom on February 7, 2014
Verified Purchase
I did enjoy reading this book but was very disappointed in its brevity. I expected much more insight to the life and times of the great sage Rashi, not least for the expensive price of this book in Kindle.
Read more
2 people found this helpful
Report abuse

clive pickles
5.0 out of 5 stars Five Stars
Reviewed in Canada on March 10, 2017
Verified Purchase
an almost unknown Wiesel book. A nust for those who study his lectures.
Read more
Report abuse
See all reviews