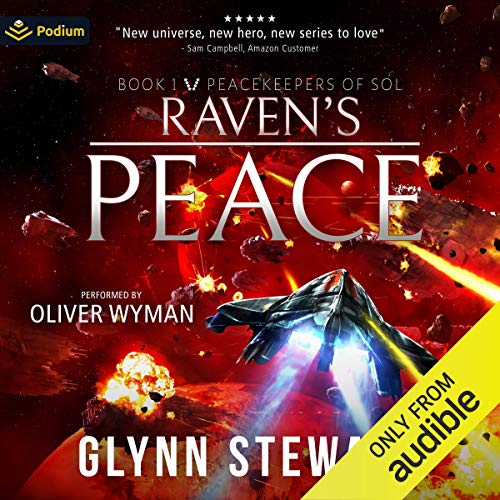 4.4 out of 5 stars
4.4 out of 5
351 global ratings
How are ratings calculated?
To calculate the overall star rating and percentage breakdown by star, we don’t use a simple average. Instead, our system considers things like how recent a review is and if the reviewer bought the item on Amazon. It also analyzes reviews to verify trustworthiness.
Top reviews

Jason
3.0 out of 5 stars Give this series a pass and read his other books
Reviewed in the United States on November 7, 2019
Verified Purchase
Love Glynn Stewart’s writing but I felt that this series fell a little short of the mark.

A couple issues was that I liked the secondary character of o’flannagain, I even liked the redeemed pirate Attalis better than the main character Henry who felt stiff.

Also the female lead of ambassador really didn’t do anything and her official instructions actually were to do nothing and let other worlds fall into chaos.....

The premise was good, but execution felt off both in the twist at the end which was not good both in cause and effect

I hated the twist and the stupidity that came from it and would say more, but trying to avoid spoilers.

the fact that I felt less than nothing was accomplished at the gathering.

The eventual last 5 pages was ok...but not nearly enough to turn things around.

I will continue to look forward to his other series and love the duchy of Terra and the exiles even his urban fantasy etc, but I will give this series a pass.
Read more
19 people found this helpful
Helpful
Report abuse

Mark
2.0 out of 5 stars Military SF becomes Woke while putting you to sleep
Reviewed in the United States on June 5, 2021
Verified Purchase
I got that the main character was very gay the first half dozen times he goes out of his way to insert his "Ex" husband into random conversations. But the perpetual value signaling went from merely annoying to distracting to desperate very quickly. The "story" seems to be more about the authors attempt to create a multicultural, diverse, WOKE universe with occasional snippets of military SF than a Military SF book. If the author wants to make a value signaling commentary to show his compliance to the new social dogma, its his/her/their right. Just don't waste my time and money labeling it military SF.
I gave it two stars instead of one, because the author obviously has the talent to write a good Military SF story, they just chose to value signal instead.
Read more
4 people found this helpful
Helpful
Report abuse

Takeyabue
5.0 out of 5 stars The start to a new window on the skill of Glynn Stewart
Reviewed in the United States on November 21, 2020
Verified Purchase
While Glynn Stewart has a number of series in genres ranging from urban fantasy to military science fiction, his true skill as an author is best illustrated by his ability to write a number of very different series within the same genre. Raven's peace is a golden example of this ability. While basically a standard military science fiction, Raven's Peace details a unique situation and culture unlike any of his other works. In this situation, it took three attempts for me to stick around for the end of this story. In short, go into this expecting something very different from the magic in space of his Starship Mage series, the more traditional Castle Federation series, or even the alien heavy Duchy of Terra series.

An expansive war featuring a very large-scale revolt by a wide variety of slave and outsider races against a dominating and oppressive galactic overlord insectoid race has come to an end with an act of genocide which destroys their reproductive ability. The remaining members over the former overlords gather leaving vast stretches of the galaxy without any type of law and order beyond that which the strongest of the former allies might be able to impose through might or other means.

Henry Wong was commander of the ship that delivered the final blow and has paid a mental and social price for it. Brought back to command to act as a figurehead for the pending peace conference, he leads a ship into several battles which more than adequate demonstrate there will be very little peace any time soon. Having paid such a price to overthrown one set of tyrants he has no taste for the establishment of a whole new regional set. Hence the peacekeeper of the series and a role with he hopes will begin to redeem his soul.

Not a comfy cozy book, but a unique and ambitious tale of what happens with old friends of long duration part ways and fragment. Go in expecting a bit of a slow learning experience and you will not be disappointed.
Read more
2 people found this helpful
Helpful
Report abuse

Dr D
5.0 out of 5 stars A really great series beginning
Reviewed in the United States on November 14, 2019
Verified Purchase
A really new look at the aftermath of a big interstellar war and the recovery process.
As usual for Kindle books, more typos than print books, but essentially none more than blips. Although Stewart's space yarns are much better crafted than all but a tiny fraction of authors in the field, still, he has some weaknesses. For example, he doesn't seem to know the difference between novae and supernovae (totally different phenomena). Although the jury is still out, large stars like Procyon and Zion likely do NOT have habitable planets. Procyon has a companion white dwarf, which likely wiped clean any living rocky worlds when it passed through its red giant phase. Procyon itself is an older F5 star with a total lifetime of perhaps 2+ Gyr. Zion, at only 9 ly from Earth, should be very bright in our night sky and have a proper name from antiquity. There are other such issues that are jarring, but not story breakers.
One real issue: since so many Kenmiri warships were captured and available for reverse engineering, one would think the UPA warships would have the same inertial compensator technology as the other warring partners whose warcraft are based on Kenmiri designs, or ARE refurbished Kenmari craft. Yet the acceleration difference is a fairly crucial issue in a number of places in the story.
Otherwise, a really absorbing yarn, very well crafted and and a delight, cover to cover. Highly recommended. The only reason I am not waiting with baited breath is his OTHER series awaiting their next story. I read almost everything this author writes and NO disappointments! He is absolutely among the top authors in SF writing today.
Read more
3 people found this helpful
Helpful
Report abuse

Wildwily
TOP 1000 REVIEWERVINE VOICE
4.0 out of 5 stars Good, but
Reviewed in the United States on November 20, 2019
Verified Purchase
It was an enjoyable read. The plot has complexities that make for a solid narrative. The characters are a little thin, but as the first novel of a series it didn’t *over* introduce and describe them, leaving something for the future.

There was something that failed to ring true about many of the military interactions. A lack of intensity or that little bit of snap. Maybe it was a missing character, that Chief who growls or the XO who seems merciless. They started out complaining about getting the dregs of the fleet and managed to gloss over that almost instantly. It was a sub plot that was almost ignored as soon as it was established and it left a hole in the development of the story.

I still liked it. I just think it could have been better. I will likely preorder the next novel.
Read more
4 people found this helpful
Helpful
Report abuse
See all reviews

Anne Jones
5.0 out of 5 stars A great take on humanity taking responsibility for its own actions
Reviewed in the United Kingdom on November 8, 2019
Verified Purchase
A great start to a new series, reading on my journey to / from work and was disappointed when I had to get off the train. Looking forward to the next book.
Read more
3 people found this helpful
Report abuse

Amazon Customer
5.0 out of 5 stars Excellent
Reviewed in the United Kingdom on December 8, 2019
Verified Purchase
Truly impressive space opera, great storyline, got lost in it till the last page was turned. Already reaching out for the next.
Read more
One person found this helpful
Report abuse

Anne V.
5.0 out of 5 stars Excellent beginning
Reviewed in Canada on June 12, 2021
Verified Purchase
Very much a first book in a series, this sets up the universe intriguingly and introduces complex and interesting characters. Looking forward to book two!
Read more
Report abuse

Amazon Customer
5.0 out of 5 stars Another awesome book
Reviewed in Australia on November 26, 2019
Verified Purchase
Another awesome book from Stewart. Perhaps a little short compared to others of his that I have read; the ending was quite abrupt. Doesn't detract from the overall story all though, just makes me want the next book sooner!
Read more
Report abuse
See all reviews
Back to top
Get to Know Us
Make Money with Us
Amazon Payment Products
Let Us Help You
EnglishChoose a language for shopping. United StatesChoose a country/region for shopping.
© 1996-2021, Amazon.com, Inc. or its affiliates