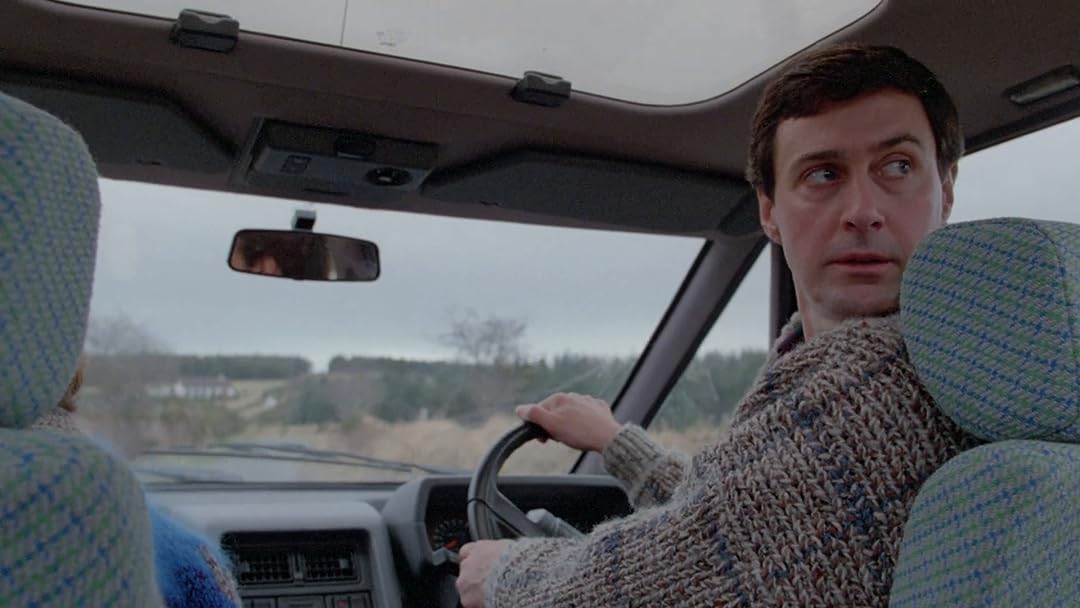 Fred AdelmanReviewed in the United States on November 18, 2017
4.0 out of 5 stars
RawHead is a sight to behold!
Verified purchase
WARNING SPOILERS! Forget that this film is based on a story by Clive Barker. Forget that Clive Barker disowned this film upon its release. If you can forget these two things you will probably enjoy this unconventional monster-on-the-loose flick with a real nasty streak. An Irish farmer, while trying to remove a stone pillar from his field, accidentally releases the title creature from a long imprisonment. A vacationing photographer (the late David Dukes) and his family try to convince the local authorities that the creature does exist, but to no avail. Meanwhile, while photographing the inside of an old church, Mr. Dukes learns the truth about the legend of RawHead Rex. The police finally believe his story after one of his children is brutally murdered by the creature. What makes this film different from others of its like is the eerie atmospheric photography and general mean-spiritedness. This film is steeped in local Irish color and contains some truly offbeat characters. There's a local priest who wants to help RawHead Rex and is not above murdering people and spewing filthy language. RawHead urinates on the priest while he begs for more! This and many other scenes (including a beheading, a gutting and other gory scenes) deter you from the fact that the story line is very thin. Forget the story (and the rather weak ending featuring some bad optical work) and just feast your eyes on the screen. You'll have a bloody good time (and RawHead Rex is a sight to behold). Director George Pavlou also filmed Barker's story "UNDERWORLD", released here as TRANSMUTATIONS (1986). It's a rather boring exercise mixing detectives with monsters. He also directed the crapfest LITTLE DEVILS: THE BIRTH (1993). RAWHEAD REX also stars Kelly Piper, Ronan Wilmot, Niall Toibin and Heinrich von Schellendorf as RawHead. Stay away from the version shown on the SyFy Channel. It's missing most of the violence and the urination scene. David Dukes' last film was the disappointing TV miniseries ROSE RED (2002). A Vestron Video VHS Release. Released on DVD by Artisan Home Entertainment, which is long OOP. Now available on DVD and Blu-Ray from Kino Lorber in an unbelievable beautiful 4K Restoration print from the original camera negative. This is really the only way to watch the film. Not Rated.
28 people found this helpful

Joshua SkyeReviewed in the United States on December 17, 2018
2.0 out of 5 stars
Love the movie, upset with Amazon!
Verified purchase
I am a huge fan of the film, and Kino did an admirable, but flawed, restoration, but I am upset with Amazon on this one. The photo of the product clearly displays it with the collectable slipcover. As such things are much sought after by collectors such as myself, I was very upset when I received the movie without it. Amazon needs to be diligent about presenting the products that you will actually receive. I could have easily trotted down to my local Movie Trading Company and purchased this film for the same amount of money WITH the collectable slipcover. Seriously, get with the program Amazon!!!
10 people found this helpful

michael sobieskiReviewed in the United States on February 6, 2021
3.0 out of 5 stars
Ah man Rawhead Rex
Verified purchase
I haven't seen this movie in a long time, and i remember watching it as a kid, we rented it from a video store when i was like 12 or 13 or something. If ever there was a movie that could do with a remake that would do well with it, its this movie. So much of it works, but that creature is SO fake looking. It's one of those things where the creature takes away from the movie because of how goofy it looks, imo. Looks like its cross-eyed and has crazy eyes at the same time, and it looks like a suit. I would love to see a hardcore serious remake of this film with updated special effects.
3 people found this helpful

James T.Reviewed in the United States on October 20, 2017
4.0 out of 5 stars
Can I bend your ear for a moment?
Verified purchase
I don't usually leave reviews for ...well anything. I think they are mostly pointless because when it comes to art/entertainment be it movies, books, video games, etc., it's all relative. What might be great in one person's eyes may be terrible in another's. In the end it really doesn't matter either way and it's a no win argument for both sides.

Anyway, I grew up in the late 70's and throughout the 80's...I was there...and experienced it first hand and NO I'm not looking through a pair of nostalgia glasses. (I'll leave that for the prudes & hipsters who, IMHO, seemingly wish they had grown up during that time even if they won't admit it but ironically hate on it and call everything from that era cheesy, but I digress) You really HAD to be there to understand what all the fuss was about when it comes to the entertainment of the era. I'm not even going to try to explain it to you. You either get it or you don't.

Case in point, RawHeadRex. Cinematic masterpiece? No. Best adaptation of its source material? (Clive Barkers short story of the same name from Books of Blood Vol. 3) Nope. Worst horror/monster film ever? Not even close. If you actually think that...fine, but that leads me to believe you really haven't seen many movies.

I'm not here to sell the film though. You already know if it's something you're interested in or you wouldn't be here, right? The new dvd & bluray from Kino Lorber looks about as good as it ever will I think. It's a step-up from the original vhs and dvd editions that's for sure. It looks better than I thought it would. Sound is solid and it has a decent set of informative extras. Overall an excellent edition and one that is worth the money.

Uh-oh, here comes my opinion! - RawHeadRex is a decent little monster film. It has some cool atmosphere, practical effects, over the top performances and a low budget that bleeds throughout all the proceedings in the best of ways. It's not perfect by a long shot but it does have one thing that is sorely missing in a lot of today's low budget direct to video releases and even major studio blockbusters...FUN!

Remember when movies were fun and people didn't take everything so seriously? I do. Nowadays most people act as if you assaulted them personally if it's not the greatest thing ever. It's really sad. I've never seen/read/played a prequel, sequel or inbetwequal that ruined my original experience with anything. If you have, I urge you to re-evaluate your life OR better yet instead of complaining, write a book, write a script, shoot a movie, get into acting, create a video game...be part of the solution instead of just another pointless angry reviewer. We have enough of those pretentious idiots already.

I've rambled enough. Thanks for reading...and if by chance this ticked you off somehow, lighten up!

And quit using the word cheesy. :)

Amazon CustomerReviewed in the United States on November 15, 2017
5.0 out of 5 stars
Great Blu Ray transfer from Kino
Verified purchase
This is probably as good as it's going to get for Rawhead! The 4K scan transfer gives this film new life and the features are very suitable for this type of 80's low budget film. I've come to appreciate this film more over the years and this new HD release enhances that even more, it's great to have this cult classic on my shelf in stunning HD! No more OOP DVDs that are being priced at $200 bucks with crappy full screen transfers LOL! True horror fans should have this in their collection or Barker fans.
11 people found this helpful

ValmontReviewed in the United States on March 18, 2018
3.0 out of 5 stars
Even Clive Barker doesn't like it
Verified purchase
WARNING: Liquid courage (booze) may be required for you to watch this. The only redeeming quality is, well....Clive Barker. This fiasco of a film was loosely based upon Clive's original creature concept from his Books of blood. The only reason for this film sucking is because I understand Barker didn't do a hands-on approach like he knows he should have, thus the BIG DIFFERENCE between this and Hellraiser.
Bad actors. Bad scenery. Bad, BAD Rawhead creature look. The best scene was Rawhead pissing all over a priest. But it's sort of a Clive Barker thing, so I just had to watch.
5 people found this helpful

M. StrainReviewed in the United States on May 9, 2020
4.0 out of 5 stars
Entertaining
Verified purchase
This movie was entertaining. The acting wasn't bad and I liked the story. The effects for Rawhead were laughable, I mean, just watching him on screen made me bust out laughing. I was almost in tears at one point. However, that added to the charm of the film, and the effects for the victims were actually well-done, which was weird lol. It was written by Clive Barker and I heard he wanted his name removed from the film. Considering his other projects and this one, I can see why. It does have that cheesy 80's charm while having some industry positives though. I would watch it again.
One person found this helpful

AlanCReviewed in the United States on December 19, 2017
5.0 out of 5 stars
RAWHEAD... is what they call him!
Verified purchase
This movie is as tripe as they come, man in rubber suit with inferior acting all around. Probably why I love it so much? The transfers of these are so much better than the earlier DVD. The early DVD was 4:3 and very grainy looking. The colors were washed out completely and portions of the dialog were uneven. These new releases are a cause to rejoice for fans of this film. Now, sights and sounds are on par for films of the period.
2 people found this helpful
See all reviews
Back to top
Get to Know Us
Make Money with Us
Amazon Payment Products
Let Us Help You
EnglishChoose a language for shopping. United StatesChoose a country/region for shopping.
© 1996-2021, Amazon.com, Inc. or its affiliates