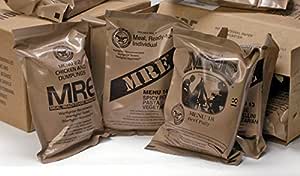 1 11 1
Is this feature helpful?
Thank you for your feedback.
Share
Have one to sell? Sell on Amazon

Brand: MRE
4.3 out of 5 stars 595 ratings
| 100 answered questions
Currently unavailable.
We don't know when or if this item will be back in stock.

Statements regarding dietary supplements have not been evaluated by the FDA and are not intended to diagnose, treat, cure, or prevent any disease or health condition.

4.3 out of 5 stars
4.3 out of 5
595 customer ratings
How does Amazon calculate star ratings?
Amazon calculates a product’s star ratings based on a machine learned model instead of a raw data average. The model takes into account factors including the age of a rating, whether the ratings are from verified purchasers, and factors that establish reviewer trustworthiness.

R
5.0 out of 5 stars As expected. Genuine MREs.
Reviewed in the United States on March 6, 2019
Verified Purchase
I will start off by saying, I don't know what kind of shipping service they used, but kudos to the guy that dropped this stuff off at 10:08pm. Now to the good stuff.
I got a good variety out of the 8 that I got. Most were packed in 2015, some went up to 2017. Which is insanely fresh. 2015 is quite young by MRE standards. Depending on the meal, 2012 or older is where I'd start asoing questions, but these guys seem to have pretty new stuff. Mine were all sealed and undamaged.

As for the good, these are genuine military MRE's complete with all the components. Generally it will come with an Entree, snack, cracker or tortilla, spread or Jam, a dessert and an accessory packet with drinks. If you do not get crackers or wheat snack bread, it is because if you got a tortilla, that is the replacement for them. Some of them are genuinely very delicious and filling. They are high caloric, high sodium and sugar food items, I would not recommend eating these if you are not active often; I personally use these as emergency meals. Irregardless, this is military food, not Gordon Ramsay pre-made meals. Some are good, and some are bad, and that is no fault of the seller. It is military food, plain and simple. But generally, it's personal taste.
As a tip, if these clog you up, eating 4 of the chiclets in the accessory packet will act as a laxative.

Now to get the unpleasantness out of the way; The "Commercial Sale is Unlawful" tag on the bag does not apply to you or the seller. It applied to the Military personnel it is issued to. Because it is their free ration, they cannot SELL it, or they can be held accountable by UCMJ. But there is nothing wrong with GIFTING it to someone for free... and maybe collecting some cash later as a "Birthday gift" as a legal way around it. It's completely legal in that manner.

Chris Bickford
5.0 out of 5 stars My Granddaughter's favorite
Reviewed in the United States on June 27, 2019
Verified Purchase
We've ordered the MREs 3 different times, and every time we get something different.

My granddaughter and I watch Steve1989MREInfo videos together, and ever since then, she's been interested in trying MREs.

The MREs themselves allow for unboxing (which my granddaughter loves), and she eats them over the course of a few days. Good taste, good fun, good value.
Read more
89 people found this helpful
Helpful
Comment Report abuse

The date on the pack was 2018. Everything tasted fresh - the tortillas were still bendable without breaking, the gum was soft. The FRH (flame-less ration heater) worked great, heating up the main (beef) in about 8 mins. The shredded beef tasted fine and the BBQ sauce wasn't too smoky or sweet - it was just right. The jalapeno cheddar cheese spread was good on the tortillas. The oatmeal cookie was soft and tasted fresh and had a nice hint of cinnamon. The black beans in spicy sauce had the right amount of spice to them. The beans had a little bit of firmness to them which was better than the mushy texture I was expecting.

I would definitely buy and eat these MREs again.

This was my first time trying out MREs and I was so pleased that I just ordered a full case of the B Menu.
Read more

BakedPotato
3.0 out of 5 stars Meals are up to date as posted but half of the FRH's in mine where duds
Reviewed in the United States on June 24, 2019
Verified Purchase
1 of 4 didn't do much more than buble and made it a little warmer than outside, 2 of 4 was warmer. the last two worked perfectly. Probably storage conditions of the 2 affected them and one of the snack bread was stale and was covered in dry mold. No pic was out on a cliff without a phone
Read more
24 people found this helpful
Helpful
Comment Report abuse

spencer
3.0 out of 5 stars Disappointing options
Reviewed in the United States on December 9, 2018
Verified Purchase
I was hopeful that some of the flavors I received would be appealing as I had read others reviews and they looked as though they had good options. I received mine and got 'white chicken chunks' with no seasoning, and 'tuna chunks' at least this one had lemon pepper seasoning. I also received beef stew and sausage patty which those two don't appear to be too bad. I do not eat tuna (not the company's fault) and I hear the chicken is less than desirable, so these meals will be strictly for emergencies only rather than being taken on camping trips. Also rated 3 stars because it seems as other customers got some sort of heaters and utensils, my package came with nothing but the meals themselves. (If I was not supposed to receive heaters and/or utensils I will change my rating).
Read more
26 people found this helpful
Helpful
Comment Report abuse
See all reviews from the United States
Pages with related products. See and discover other items: camp food, designed shelf, freeze-dried food, mre 24 hour ration, emergency food supply

Disclaimer: While we work to ensure that product information is correct, on occasion manufacturers may alter their ingredient lists. Actual product packaging and materials may contain more and/or different information than that shown on our Web site. We recommend that you do not solely rely on the information presented and that you always read labels, warnings, and directions before using or consuming a product. For additional information about a product, please contact the manufacturer. Content on this site is for reference purposes and is not intended to substitute for advice given by a physician, pharmacist, or other licensed health-care professional. You should not use this information as self-diagnosis or for treating a health problem or disease. Contact your health-care provider immediately if you suspect that you have a medical problem. Information and statements regarding dietary supplements have not been evaluated by the Food and Drug Administration and are not intended to diagnose, treat, cure, or prevent any disease or health condition. Amazon.com assumes no liability for inaccuracies or misstatements about products.