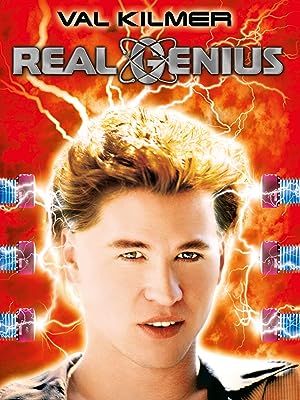 (4,446)
1 h 45 min1985HDRUHDPG
Whiz-kids (Val Kilmer and Gabe Jarrett) plot their revenge on a think tank that has them working onsecret weapons for the military.

Steve_MReviewed in the United States on September 14, 2022
5.0 out of 5 stars
Buying this on 4K is a Real Genius move!
Verified purchase
This review is for the recent 4K Blu-ray release. I've been waiting for a decent release of this movie for some time. As soon as I saw it was coming out, I knew I had to get it.

The story follows a child science prodigy who, at the age of 14, is accepted to a prestigious university and placed on a research team with another former child prodigy to develop a new type of laser. Not only does the New Guy have to deal with the flamboyant eccentricities of his new roommate, but they both have to come to grips with the fact that their new laser is going to be used by the government as a new super weapon.

The movie is just fun to watch. It's very "80 's" and probably the most fun involves the elaborate pranks that the geniuses use to blow off steam. Val Kilmer really makes the movie with his quick wit and one-liners. All of the other actors do a great job too, but Kilmer is the selling point. Special effects are good too, although this isn't actually considered a Special Effects film. The best effect is the million dollar "prank" at the climax which I won't spoil here.

I rediscovered this film after the TV series "The Big Bang Theory" became popular. The only thing this movie and that series have in common is the love for science and nifty reactions, but I think people who love science will really enjoy this movie. Especially since they went to great pain to make all of the science in this movie as plausible as possible.

The 4K presentation is well done. I like how they cleaned up the space sequence at the beginning and took off the rough edges of the spacecraft. All of the special features are on the Blu-ray disc included in the package. Special features include Director's Commentary, deleted scene and TV version of the film.

Also, don't be surprised if the package looks a little different than what you see on Amazon. The package has a sleeve with artwork depicting many scenes from the film drawn in a cartoon like manner. When you remove the sleeve, you'll see the "Einstein" cover that's promoted on the Amazon web page. Just some forewarning if you're like me and get concerned for a fraction of a second when the package you open doesn't look quite as advertised.

Highly recommended for fans of 80's comedy, Val Kilmer and, most of all, Science!

EricReviewed in the United States on September 20, 2022
5.0 out of 5 stars
You know, you will rue the day!
Verified purchase
This review is for the 4K release of Real Genius! This is the best movie of ALL TIME! And now its in 4K! As you can see from the pictures I added, it does have the unique and awesome slip cover! The cover for the case is cool too because Chris has a poster of Einstein in his room so it makes sense. If you are a fan of this movie.... BUY IT! It's a moral imperative! You won't be disappointed and its worth the money! I may buy a second one to keep as a collectors item! The picture is amazingly clear and the sound on a surround sound system like mine, is incredible!! Love love love this movie! Gets funnier every time I watch it!
8 people found this helpful

TronozonReviewed in the United States on September 13, 2022
5.0 out of 5 stars
Finally released on an Official Blu Ray Disc
Verified purchase
"Real Genius" has been on the list for most desired for a Blu Ray release. In 2017, the studio inexplicably released a BD-R rather than a printed disc and included a director's commentary. It was overpriced and a limited edition. Finally, with the 4K edition in 2022, it gets a proper release. The edition includes two discs, the standard Blu Ray and the 4K Blu Ray disc. The commentary track and extra features are only on the standard disc. The extra features are just one deleted scene and then 22 minutes of over two dozen takes from the filming of that one scene. It all emphasizes how much time and money is spent shooting a film because the scene ultimately did not make it into the final cut. Hopefully with Val Kilmer making a widely viewed appearance in "Top Gun: Maverick," more people unfamiliar with "Real Genius" can discover it.
4 people found this helpful

Dr. PaulReviewed in the United States on August 6, 2020
5.0 out of 5 stars
Cult classic and among personal favorites
Verified purchase
I game to Real Genius years ago as a recommendation and instantly fell in love. It’s a fun movie, a great date night film, and one I’ve watched many times. Val Kilmer in one of his most fun, best films - classic. Okay, so it’s not rocket science (pun intended), but it’s a great way to spend time and enjoy a movie. No spoilers - why ruin in - but grab some pop corn, someone you like, and just have fun. Watch as this quirky band of smart people take on the evil professor (the ever great William Atherton) and military. Great 80s music only adds to it. Yep, a GenX classic.
6 people found this helpful

alanawritesReviewed in the United States on September 13, 2016
5.0 out of 5 stars
Smart People ON ICE!
Verified purchase
Funny, fun, bouncy, endearing characters, the general hotness of Val Kilmer in bunny slippers, some great lines. A pointed commentary on the legality of covert government weapons spending. Lasers. Student beauticians. Inevitable betrayal. A caper. A very cute romance. And a creepy guy living in the basement.

It is fair to say this is the best popcorn movie ever made.

I would be delighted to buy this again if they did commentary and extras.

Even more so if they made a sequel with the same actors 25 years later. Because things have just gotten that much worse.
18 people found this helpful

James C. CavallaroReviewed in the United States on September 22, 2022
5.0 out of 5 stars
Awesome 4k transfer/Dolby Vision!
Verified purchase
What an incredible transfer of this movie to 4k/Dolby Vision! Old movie and it shines they did such a good job. The sound is excellent also. Very impressed, great, fun movie too.
2 people found this helpful

Timothy Lee AversReviewed in the United States on September 18, 2022
5.0 out of 5 stars
Film-lovers Edition
Verified purchase
You owe yourself a copy of the 4K remaster. Ten seconds of the audio commentary with Martha Coolidge is worth the price of admission but you also get the TV edited version, and the restoration captures some lost, trailing lines you might have missed in inferior editions.
3 people found this helpful

John BlackReviewed in the United States on June 7, 2015
4.0 out of 5 stars
Another teen nerd movie from the 80's, but more fun that the average.
Verified purchase
This nerd movie is not just about nerds getting picked on, then getting revenge. During most of the movie the nerds are, for the most part, having fun. There is a nice balancing of an overall fun atmosphere in the dorm and in the school with plenty of one-liners in the dialogue, while other parts of the humor are more subtle with a hint of mystery.

The character development is fairly good, even though the characters themselves are strange. The main conflict for Mitch (the 15-year-old genius) is a struggle between concentrating on his school work, and loosing up and having fun. There is nothing realistic about this school, nor does the movie try to make it seem realistic, it is just fantasy fun.

It is not until near the end of the movie that these geniuses even realize that they are being exploited, therefore the revenge is quick and to the point, but still funny.
9 people found this helpful
See all reviews
Back to top
Get to Know Us
Make Money with Us
Amazon Payment Products
Let Us Help You
EnglishChoose a language for shopping. United StatesChoose a country/region for shopping.
© 1996-2022, Amazon.com, Inc. or its affiliates