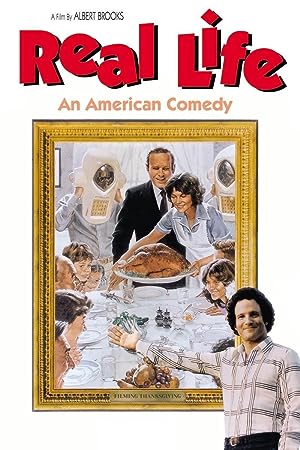 David E. BaldwinReviewed in the United States on December 3, 2017
5.0 out of 5 stars
Call This One Chayefsky Lite
Verified purchase
Years before Albert Brooks became known for his voice work for the "Finding Nemo" movies he was better known for contributing short films on "Saturday Night Live" when the show was really cutting edge. You know those segments that included the works of Gary Weis and Walter Williams ("Mr. Bill"). Don't know how this curio was bankrolled but, boy, I'm glad it was! Ostensibly this is a spoof of "The American Family" documentary that was shown on PBS in the early Seventies that I probably wasn't allowed to watch. That early experiment in reality television featured the parents breaking up and one of the kids coming out of the closet. In this flick Brooks is kind of playing himself but a jerkier version thereof. Here he's a documentarian coincidently named Albert Brooks who's making a film about a real American family supposedly unobtrusively, however, he's so noxious and self-absorbed that he not only wreaks havoc on the subjects but also ruins the project in the process. What's amazing about this film is how prescient it is in anticipating the vast wasteland that television is today. One could call "Real Life" a "PG" version of "Network" but no less scathing
2 people found this helpful

GReviewed in the United States on February 4, 2020
2.0 out of 5 stars
Disappointing
Verified purchase
I got a few chuckles out of this, but I turned it off about halfway through because there wasn’t enough humor and it was difficult to sympathize or even like any of the main characters. People did things that didn’t make sense (e.g., the wife kissed Albert Brooks’ character on the lips in one scene when she barely even knew him) and scenes that just made me uncomfortable to watch (e.g., the wife inviting the film crew to her gynecologist appointment). If you are in the mood for a good Albert Brooks film, I highly recommend, “The Muse.” That is far superior to this film.
One person found this helpful

takethekmanReviewed in the United States on January 21, 2007
5.0 out of 5 stars
Still Hilarious...And Hardly Seen
Verified purchase
Anyone who is into that whole 'Simpson's' style of humor should really enjoy this. A movie way ahead of it's time, it features Albert Brooks as a semi-psychotic filmmaker who is making a movie about Charles Grodin and his family. There are so many comedic bits that work here; The tension between Albert and the Black journalist Dr Cleery is hilarious; The scene with the show horse works quite nicely, as does Brooks sudden singing at the start of the film. For those who appreciate Brook's unique sense of humor, I can't imagine you would find fault. And for a movie that was made in the late 70's, it's still funnier than stuff that came out last week. Harry Shearer contributed to the script, stars, and offers his voice to the radio playing in Charles Grodin's car. Grodin is in top form here, too. Constantly depressed('She set the table...He set the mood...'), Grodin makes a perfect counterpart to Brooks and his hair-brained mania. Also, it should be noted that the narrative, provided by Brooks throughout, is a constant source of comedic 'gold'. This film is smart, different, and, and the title of this review indicated, hilarious.
7 people found this helpful

Damian CainReviewed in the United States on January 11, 2016
5.0 out of 5 stars
I'd like to write a detailed review
Verified purchase
I'd like to write a detailed review, but I don't want to spoil any of the jokes. I'm just going to leave it at saying that one wildly absurd situation after another slings off into some of the most moronic, insane extremes you could ever imagine (well, I couldn't, but Albert Brooks did). When I first saw it, back in the eighties, I repeatedly laughed so hard that I painfully gasped for breath-- like when a little kid can't stop laughing. It really hurt! Now my teenage kids love it too. Probably the funniest movie I ever saw.
5 people found this helpful

MikeReviewed in the United States on November 6, 2006
4.0 out of 5 stars
Brook's first film is one of a kind.
Verified purchase
Albert Brooks may be the most creative comedian of this and the last century (his real name is ALBERT EINSTEIN after all; and you can look it up)

This first film is hilarious; obnoxious; and all together FUNNY! Brooks rarely if ever plays sympathetic characters in his movies; all the while skewering people who are the same in "real life". This is the ultimate put-on movie; may have influenced in some way the later films of Christopher Guest. Some of my favorite bits are Albert's "back burner" confrontation with the black consultant, His appearance at the front door in clown makeup (listen for his in-character "hello?" before Grodin opens the door-for some reason it always makes me LOL), most of the preparation experiments for what amounted to a month or so of filming (instead of the hoped for year)before it collapsed are hilarious as well. Brooks may have made better films but this is still the most original of them all.

EricReviewed in the United States on August 10, 2014
4.0 out of 5 stars
Albert Brooks Looks to Film REAL LIFE
Verified purchase
Very funny precursor to today's reality television has writer-director Albert Brooks (making his directorial debut) essentially playing himself, a filmmaker who decides to film one family over the course of an entire year. The lucky family is based out of Phoenix, Arizona. The patriarch (Charles Grodin) is a veterinarian and Brooks looks to capture all of it. However, as life gets complicated, so does the movie. Very funny for the most part but does have some slow spots. The cast is absolutely terrific.
2 people found this helpful

John GambinoReviewed in the United States on April 29, 2015
4.0 out of 5 stars
albert brooks = comedy gold
Verified purchase
Very funny satire. Too bad Charles Grodin is in it. Met him before. Not a pleasant person. Kinda ruins the movie for me. The fact that his character's life is destroyed helped.
3 people found this helpful

Amazon CustomerReviewed in the United States on September 26, 2017
5.0 out of 5 stars
Classic comedy
Verified purchase
I first saw this movie quite a few years ago & I can still remember how hard I laughed. Albert Brooks has never received the attention he deserves. Don't miss out on this one.
One person found this helpful
See all reviews
Back to top
Get to Know Us
Make Money with Us
Amazon Payment Products
Let Us Help You
EnglishChoose a language for shopping. United StatesChoose a country/region for shopping.
© 1996-2022, Amazon.com, Inc. or its affiliates