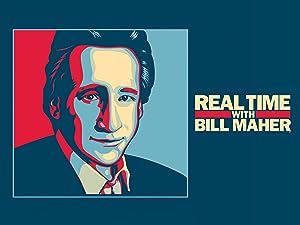 Dr. Harold S RhoadsReviewed in the United States on November 30, 2015
4.0 out of 5 stars
Tell Me The Calendar Year, NOT the Season Number
Verified purchase
My only quibble: I didn't know "Season 7" was 2009 until I viewed the episode list. The video and sound quality are good on my iPad and home TV, I can navigate easily between episodes, and I can clearly determine which episodes I have and have not viewed. I can skip discussions on outdated topics, although it's sometimes very enlightening to compare 2009 discussions with the current status of topics like health care, political debates, terrorism, or whatever. Knowing my favorite parts of the show come early (monologue) or late (New Rules) in each episode, I can select those portions with reasonably modest effort. Unfortunately, when I fast-forward through a show there's no image on my screen so I'm almost certainly missing some of the comedy bits Maher intersperses within the panel discussion.

BruceKReviewed in the United States on October 18, 2015
5.0 out of 5 stars
Amazing concept, well executed, something intelligent and probing for sanity on TV ... I'm astonished 5/5
Verified purchase
JUST HAVE TO AMEND THIS REVIEW TO ASK -
WHY AREN'T THERE MORE SEASONS OF MAHER OUT THERE ?

Gotta say, Bill Maher is the best thing out there in terms of news,
opinion, talk, and entertainment. Sometimes he seems a bit
grumpy and short-tempered and he tends to make a lot of gay
jokes which seems at odds with his political beliefs. That's just
an aside. It is good to hear a talk show host that doesn't have to
hog every minute of airtime or claim to know everything.

I think he is a little and needlessly hard on religion, but lots of
people taking aim at religion these days.

Odd when he took aim too at the school unions and openly
said he fires one of his six writers every year. The glimpses of
the real Bill are nearly as fascinating as the show and the guests.

I hope he keeps doing this forever. Not really entranced with
"VICE" though, which I think he produces.

* One thing I can add since I now watch Real Time regularly,
is that the new shows are not as good as the old shows, and
Maher seems to be burning out of not as consistent in his
beliefs any longer. I hope he doesn't turn into a Republican!
Still a good show, and a show that the right wing does not
seem able to reproduce.

Amazon CustomerReviewed in the United States on January 3, 2017
1.0 out of 5 stars
One Star
Verified purchase
Was not aware I purchased this and do not know how to cancel. Who do I contact?
3 people found this helpful

Kindle CustomerReviewed in the United States on June 17, 2016
5.0 out of 5 stars
Five Stars
Verified purchase
A necessary program.

Ms StaciReviewed in the United States on June 26, 2015
5.0 out of 5 stars
watched when I had Hbo
Verified purchase
liked when I watched on hbo
One person found this helpful

mike mReviewed in the United States on May 30, 2016
5.0 out of 5 stars
Five Stars
Verified purchase
Some great shows. Great guests.
See all reviews
Back to top
Get to Know Us
Make Money with Us
Amazon Payment Products
Let Us Help You
EnglishChoose a language for shopping. United StatesChoose a country/region for shopping.
© 1996-2022, Amazon.com, Inc. or its affiliates