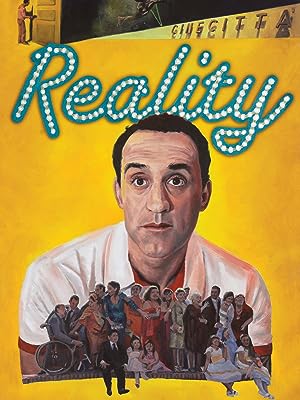 (49)6.81 h 56 min2013R
(Italian, subtitled in English). Luciano is a friendly fishmonger and scam-artist. One day, his family urges him to try out for Big Brother. In chasing this dream, his perception of reality begins to change.

Included with Topic on Amazon for $4.99/month after trial

Watch with Topic
Start your 7-day free trial
Add to
Watchlist
By ordering or viewing, you agree to our Terms. Sold by Amazon.com Services LLC.
Write review

Allen R. LevyReviewed in the United States on December 25, 2014
5.0 out of 5 stars
Reality Bites---and Bitterly
Verified purchase
This is a very dark comedy about an average guy, Luciano, who is seduced by the power of the media. He wants to get on the Italian version of "Big Brother" so badly that he loses he grip on, you guessed it, reality. He loses everything, in fact. The ending is enigmatic, as is the current style of film these days, but the film left me with a mixture of melancholy tinged with a rueful kind of laughter---the guy is human, after all. All he wants is a better life for his wife and kids. And yet he loses the very things he loves. This movie embodies, in a strange, almost mystical way, the old, true words of Shakespeare----"what fools these mortals be." Yeah, he's foolish---as are we all. You should see it. It is a little masterpiece of its kind.
One person found this helpful

Winford NaylorReviewed in the United States on October 27, 2015
5.0 out of 5 stars
Five Stars
Verified purchase
terrific entertainment with enough social commentary.
One person found this helpful

C. BumbacReviewed in the United States on February 20, 2016
2.0 out of 5 stars
Two Stars
Verified purchase
Waste of time.

Shanel GarciaReviewed in the United States on March 3, 2014
3.0 out of 5 stars
It was decent.
Verified purchase
The quality was pretty good. The full screen mode kept freezing. But other than that it was okay. It was decent.

Just wanted to let American consumers know and who ever else look to purchase it on Blu ray.

G. LambertReviewed in the United States on November 4, 2014
1.0 out of 5 stars
One Star
Verified purchase
It's a really slow movie to get into.

Tommy DooleyReviewed in the United States on August 1, 2013
4.0 out of 5 stars
Big Brother Italian Style!
Set in Naples we meet Luciano (Aniello Arena) who is a fishmonger in one of the City's beautiful piazzas. He is happily married with adoring children and as an extended family aswell as a network of supporting friends. He and his wife Maria (Loredana Simioli) also pull scams in order to bolster their income. They have a great line going on with robotic kitchen aids. Then so called `reality' TV show `Big Brother' comes to town for auditions. Everyone knows `Enzo' who won the previous year and is now in demand simply for being famous, weddings, bah mitzvahs, anything.

Well Luciano's daughter asks him to audition as he is always such a laugh at family gatherings and so he goes ahead. Then he gets asked to go to Rome for the interview and he sort of knows its a foregone conclusion that he will get in. He tells everyone and everyone in turn starts rooting for him. With the inevitable three month filming, he then thinks about creating a whole new life and binning the old one; all he needs now is the phone call and he is in the Big Brother House.

This is billed as a comedy but if anything I thought it was more tragic-comic. The performances are all great especially Aniello Arena as he slowly looses it all for the want of fame. The whole thing is very stylishly filmed as we now tend to expect from Italian cinema, and the beautiful locations only add to that. The issues are very much to the fore and it was nice to see two virtual unknowns being cast as the leads by director Matteo Garrone, who shot to fame with the excellent `Gomorrah', so it is nice to see a lighter film from him.

The catch phrase of Enzo is `never give up' which seems to be a thread running through the film, the underlying messages are somewhat different, more like `know when you are beat', sort of thing. It is in Italian with a bit of English and good sub titles it runs to 117 minutes, and is an extremely good film. I wanted to like it and I actually did, but I did not find it funny as stated earlier hence my rating, it is still though an excellent piece of cinema that takes on some serious issues in a light hearted way but still manages to deliver.

Whitt Patrick PondReviewed in the United States on April 9, 2013
5.0 out of 5 stars
A marvelous - and darkly unsettling - tale of 'reality'
Matteo Garrone's Reality - winner of the Grand Prix award at the 2012 Cannes Film Festival - is a marvelous piece of work. It is also, however, difficult to describe. The trailers for Reality, in my opinion, tend to give the wrong impression, that it is a comedy or a satirical send-up of reality shows. But while there are comedic moments in the film, particularly in the earlier parts, as the story progresses it draws you deeper and deeper into some dark territory, but it does it so gradually and seductively that even as your feelings of unease begin to rise, you cannot bring yourself to look away. The closest comparison I can make is to think of it as a combination of a dark twin-piece to 1998's The Truman Show, except that here the protagonist is outside looking in, and Josef von Sternberg's 1930 masterpiece The Blue Angel (Der Blaue Engel).

Set in the current day, Luciano (Aneillo Arena) is a likeable everyday guy in Naples. He has a good life, a loving family, and while he's not rich, he manages to get by with his regular job as a fishmonger and a little scam he runs on the side ripping off pasta-makers from the manufacturer and selling them on the black market. Life is good... until one day, out of the blue, he gets a chance to try out for Grande Fratello, the Italian version of the TV show Big Brother. And thus begins his seduction by the prospect of becoming a celebrity.

Highly, highly recommended.
2 people found this helpful
See all reviews
Back to top
Get to Know Us
Make Money with Us
Amazon Payment Products
Let Us Help You
EnglishChoose a language for shopping. United StatesChoose a country/region for shopping.
© 1996-2021, Amazon.com, Inc. or its affiliates