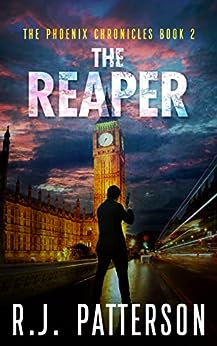 by R.J. Patterson (Author) Format: Kindle Edition
Book 2 of 7: The Phoenix Chronicles
See all formats and editions
Sorry, there was a problem loading this page. Try again.

Sometimes your worst enemy is the one closest to you.

When three CIA assets embedded in foreign drug cartels go missing, The Magnum Group is enlisted to investigate the source of a potential leak — a U.S. ambassador with close ties to the president.

However, black ops agent Brady Hawk and the team discover that there’s a much larger problem looming as more key American assets continue to go missing. The intelligence agency is being dismantled from within by an assassin.

As Hawk and the team zero in on the source, they uncover a secret about a top government official and a conspiracy that threatens to weaken the U.S. in the face of a mounting tensions with Russia. And with Hawk unable to trust anyone, he must hunt down the assassin before it’s too late.

If you're a fan of authors like Brad Thor, Vince Flynn, Brad Taylor, David Baldacci, or Jack Carr you are sure to enjoy this series from award-winning and bestselling author R.J. Patterson.

What other readers are saying:
★★★★★ "Reminiscent of the original Bourne books by Robert Ludlum, but with a sprinkling of the relationship of David Baldacci's King and Maxwell.”
★★★★★ “R.J. Patterson is up there with Baldacci.”
★★★★★ “If you are looking for some adrenalin packed action, don’t think twice, just grab a copy and start reading, you won’t be sorry.”
★★★★★ “A well crafted page turner.”
★★★★★ “Another great book by R.J. Patterson! I liked that way he makes his characters so real.”

Brian S.
5.0 out of 5 stars Book two was as good as the first one
Reviewed in the United States 🇺🇸 on October 21, 2022
Verified Purchase
Like the team of Hawk and Alex. It puts a different spin on most other spy stories. Can't wait to start r book.
Read more
Helpful
Report abuse

James J. Sweeney
3.0 out of 5 stars It was OK
Reviewed in the United States 🇺🇸 on November 7, 2021
Verified Purchase
Honestly, I really liked the premise. I’ve read other series with the same idea. Secret Gov’t Agency, doing the good deeds to keep us safe, super agent, yada yada. What I didn’t like was all the crying (literally crying and teeth gnashing) and angst by this super agent and his wife/agent partner, because they had to be away from home, and their 2-named son(joe bob- not the name they use, but you get the idea.I wonder what joe Bob’s doing right now, let’s call joe bob, we have to hurry up and save these navy seals so we can get back to joe bob before he misses us… again, you get the idea) , to protect the world. Those parts of the book got so predictable that I started skipping them. It really took away from storyline. The editors could have done a much better job with this. I’ll read the next in the series, but only because it continues the story line..however I’m still skipping the predictable crying and complaining about being in the field.
Read more
Helpful
Report abuse

Amber
4.0 out of 5 stars good
Reviewed in the United States 🇺🇸 on March 16, 2022
Verified Purchase
Pretty good book. Not a lot of vulgar language. I will continue to read the series for now. Maybe all of them
Read more
Helpful
Report abuse

Kindle Customer
5.0 out of 5 stars After a somewhat slow start the finish was great
Reviewed in the United States 🇺🇸 on December 19, 2021
Verified Purchase
I had to start this book twice to finish it the first 15% was frankly boring mostly lfor me. After that it got interesting. Once the full setup was finished the rest of the book was very good reading. An interesting mystery type plot with plenty of plain good old shoot them up action. Excellent ending also. There's nothing like a feel-good ending.
Read more
Helpful
Report abuse

BillB
4.0 out of 5 stars Pretty good story
Reviewed in the United States 🇺🇸 on August 18, 2021
Verified Purchase
Enough action to appease the action junkies along with suspense, drama and intrigue. Outcome pretty much assured but that is what escapism is all about. Letting the reader live vicariously through the fictitious characters.
Read more
Helpful
Report abuse

dennis barron
5.0 out of 5 stars The Reaper. R.J. Patterson
Reviewed in the United States 🇺🇸 on June 30, 2021
Verified Purchase
A sinister p?or has come into play. Former covert operatives are being murdered. Brady Hawke and Alex are tasked with unraveling this but there is a mile inside the covert agency they work for. Someone, a very powerful person is afraid his secret will be revealed, and he is willing to resort to murder to accomplish this. Non stop action, suspense and intrigue. Another excellent read in this series!! Enjoyed immensely!!
Read more
Helpful
Report abuse

Paul Wiekierak
5.0 out of 5 stars Typical Brady Hawk
Reviewed in the United States 🇺🇸 on June 29, 2021
Verified Purchase
Only now with a family. P!ease don't tell me that they will be moving off the ranch. Their son could never find a better place to be raised on plus it makes a good backdrop for more advanced stories which you have already proven. I Can'coz wait to get into the next book.I have a complete line of books to read (Jack Silkstone's Primal )series which I utilized. They are being put on hold for Brady Hawk and family.
Read more
Helpful
Report abuse

David A.
4.0 out of 5 stars A Rocking fast story; fun to read!
Reviewed in the United States 🇺🇸 on July 4, 2021
Verified Purchase
A guy and his gal and their little one. Their both agents and struggling with the normal constraints of life, so they begin to take on jobs in their old line of work.
Then the fun begins!
Read more
Helpful
Report abuse
See all reviews

Ray Stanton
3.0 out of 5 stars An ok read
Reviewed in Australia 🇦🇺 on July 6, 2021
Verified Purchase
First book I have read by this author. Great tried and true premise. However, some of the execution seemed projected and simple.
Read more
Report abuse
See all reviews
Report an issue
Does this item contain inappropriate content?
Report
Do you believe that this item violates a copyright?
Report
Does this item contain quality or formatting issues?
Report