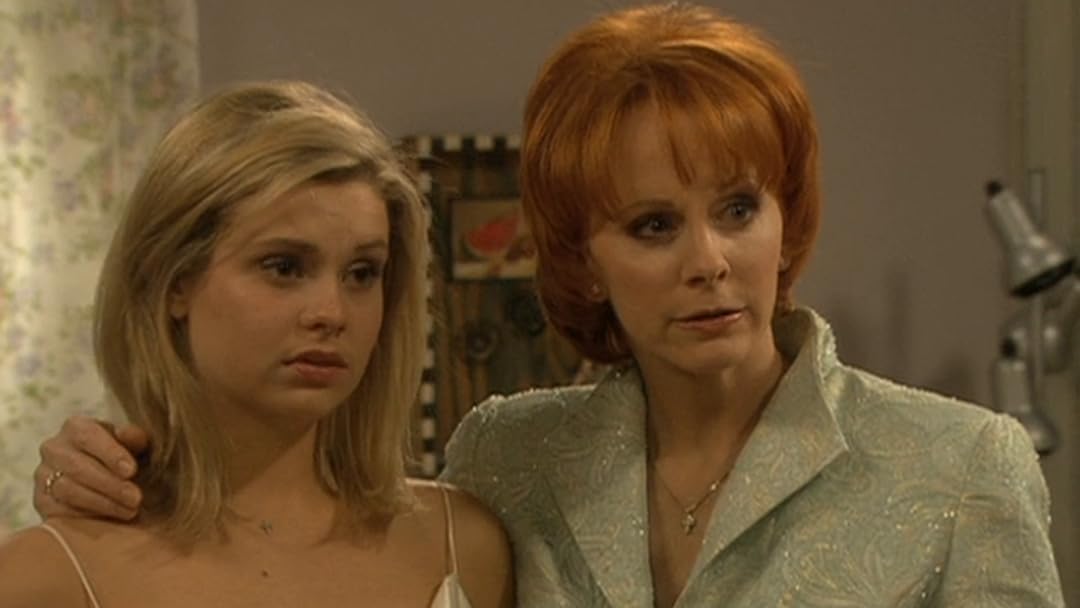 (862)
6.62002TV-PG
When your husband of twenty years divorces you for a woman half his age, it's time to move on to Plan B. For Reba, that means not only accepting that her marriage is over, but also accepting that her ex's new wife is pregnant. If that isn't disruptive enough, Reba learns that her 17-year-old daughter is pregnant too. So it's out with the old and in with the new as hubby leaves and son-in-law arrives. With all the outrageous domestic obstacles thrown in her path, Reba realizes one thing for sure: life will never be the same in this dysfunctional household!

BarbaraReviewed in the United States on August 16, 2013
4.0 out of 5 stars
"Reba-licious!"
Verified purchase
Reba is a very cute comedy based on the perils of Reba Hart, a mother of three in the throes of a divorce from her ex-husband, Brock, who is a dentist involved with quite a ditzy, but sometimes endearing hygenist. As if the divorce was not enough to handle, Reba must also endure the issues that come with her eldest daughter who is pregnant and still in high school. While the situation would have most fall to their knees, Reba seems to be able to manage and make things work better than most. Barbara Jean, however, can make life very difficult and I am amazed at Reba's composure when dealing with this very absurd character. Season 1 is full of laughs along with Season 2. Also, I always wondered why Reba's best friend, played by Park Overall, virtually disappeared without explanation. Maybe to give more time to Barbara Jean and Reba's relationship, but it certainly seemed like a very loose end. However, as the series progresses, it becomes less entertaining and more annoying due to the choices made and the children who seem to get left in the background as Cheyenne is always front and center and the one who seems to get all the attention from Reba.
4 people found this helpful

GoldenReviewed in the United States on July 31, 2005
5.0 out of 5 stars
Zany comedy
Verified purchase
This is an amazing show. My husband and I watched the last episode of the DVD tonight (# 22) and once again he characterized it as hysterical.

This show is a real WWJD story. Given much family dysfunction and "sin" how do you make it right? Love thy neighbor, forgive the sins of those around you, and keep on keeping on by putting love and family first is the real message of Reba which makes us feel good after we have watched each episode.

There are absolute slap sitck moments as well as incredibly realistic and tender moments that make watching the Reba shows rewarding. If you want wholesome entertainment in this world of grim destruction this is a nice show to watch.

I bought the Season One DVD after watching several seasons of the show on TV. The DVD is a commercial-free bargain for laughter therapy, relaxation, and an alternative to most regular TV which I find incredibly shallow, violent, and heavy on shock, awe, and titilation with no substance what-so-ever.

As soon as we finished watching our last episode tonight, my husband asked me to get online right away to see if Season 2 was available yet on DVD, hence my review. I hope it's coming soon!

Ciera MarieReviewed in the United States on February 28, 2021
3.0 out of 5 stars
was good but bought out
Verified purchase
this was good was very good and kind of historical for me and hubby. we enjoyed sharing with our family but then the show was bought out by another streaming service.

AmousReviewed in the United States on November 11, 2004
5.0 out of 5 stars
Another Great Re-watchable Show on DVD
Verified purchase
Yes! I am so excited that the show "Reba" is finally coming to DVD. This show is one of those great comedies that you can watch over and over, and still laugh as hard as when you saw an episode the first time. "Reba" is original, fun, and the perfect family comedy series. My mom and i watch it together every Friday Night on the WB. I pre-ordered this so i could give it to my mom for christmas, and i know she'll love it! I'm especially excited to check out the DVD's special features, which include commentary with the cast, bloopers and outtakes! The bloopers sound fun to watch, because i've always wondered how hard it must be for the cast to keep a strait face when they are working with Steve Howey (who plays 'van') because i know i couldn't. If you haven't seen this show, you are missing out! It's on the WB, Friday nights at 9pm eastern time (but i'd check your local listings.) This is the perfect show and the perfect gift.
9 people found this helpful

Brian Lee HartReviewed in the United States on January 11, 2021
3.0 out of 5 stars
Reba is one of my favorites..
Verified purchase
I bought 6 volumes of Reba, here on Amazon. Didn't care for them. Gave 'em away

K. ConfairReviewed in the United States on December 17, 2004
5.0 out of 5 stars
Remembering Reba brings it all back
Verified purchase
If you've only seen the recent episodes, then you must see how it all began. I've been a huge Reba fan for years and this show just shows how diverse her career has been. As a newly single parent in this disfunctional family, Reba along with her comical cast bring everyday situations some comic relief (well as much as you can get when your husband and his hygenist are expecting and your 17 year old daughter is now married with your first grandchild on the way). This is a terriffic series and just about the only one I would purchase on DVD.
10 people found this helpful

L.J. WESTERMANReviewed in the United States on August 8, 2019
1.0 out of 5 stars
Canceling choice
Verified purchase
I did not mean to order this episode. please cancel.
One person found this helpful
See all reviews
Back to top
Get to Know Us
Make Money with Us
Amazon Payment Products
Let Us Help You
EnglishChoose a language for shopping. United StatesChoose a country/region for shopping.
© 1996-2021, Amazon.com, Inc. or its affiliates