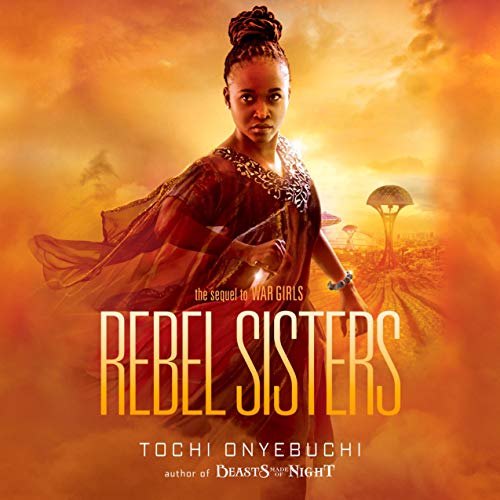 In the epic, action-packed sequel to the "brilliant" (Booklist, starred review) novel War Girls, the battles are over, but the fight for justice has just begun.

It's been five years since the Biafran War ended. Ify is now 19 and living where she's always dreamed - the Space Colonies. She is a respected, high-ranking medical officer and has dedicated her life to helping refugees like herself rebuild in the Colonies.

Back in the still devastated Nigeria, Uzo, a young synth, is helping an aid worker, Xifeng, recover images and details of the war held in the technology of destroyed androids. Uzo, Xifeng, and the rest of their team are working to preserve memories of the many lives lost, despite the government's best efforts to eradicate any signs that the war ever happened.

Though they are working toward common goals of helping those who suffered, Ify and Uzo are worlds apart. But when a mysterious virus breaks out among the children in the Space Colonies, their paths collide. Ify makes it her mission to figure out what's causing the deadly disease. And doing so means going back to the homeland she thought she'd left behind forever.

Your audiobook is waiting!
Learn more about Membership
List Price: $38.50
You Save: $4.81 (12%)
By completing your purchase, you agree to Audible’s Conditions Of Use
Sold and delivered by Audible, an Amazon company

Jen Dy
4.0 out of 5 stars Brilliant
Reviewed in the United States on November 17, 2020
This story took place five years after the Biafran War, and we can now see Ify as a high-ranking medical officer who dedicated her life, helping people rebuild the colonies. She was doing fine and all until she has to face the fact that she must go back to the place she has sworn she will not see again to help find what is causing the virus outrage and the cure. It is true that no matter how much you tried to move on and escape the hardship of the past, it will find its way back to you, and this is a perfect example of that belief. I mean, if it’s not the war we have to deal with, it’s a mysterious virus…sounds like a Deja Vu. Anyway, Ify will cross path with Uzo, who lives in Nigeria and coping with the war’s result. I am mesmerized that even though this book falls under science fiction, there’s also many historical facts. So while we were relearning history and all, we are also presented with innovative probabilities. And the author once again has proven that imagination is endless and powerful. The characters are likable; the plot is brilliant. This is one of those sequels you cannot miss!
Read more
Helpful
Report abuse

Utopia State of Mind
5.0 out of 5 stars a story about history, healing, and trauma
Reviewed in the United States on November 18, 2020
(Disclaimer: I received this book from Netgalley. This has not impacted my review which is unbiased and honest.)

Rebel Sisters is a story about the importance of the past as we move forward. A central question asked throughout the book, is how do we move on from trauma, from wars, from a world that isn't our own anymore. Onyebuchi presents a clever perspective on the future of connectivity and the dangers it could pose. The ways it can be used for knowledge, but also erasure. At the same time, Rebel Sisters asks us if people can change, if we are defined by our mistakes, and if we can move on as individuals.

Rebel Sisters examines the lies we tell other people, the fake stories we bring forth from the shadows. During the book, it also discuses the role of our past as a person and as a country. How can we strike a balance between recognizing the past, while not being consumed by it? And by our role in the bloodshed. I am consistently fascinated and in awe of Onyebchi's worldbuilding and ideas. Rebel Sisters is no different.
Read more
Helpful
Report abuse

decklededgess
4.0 out of 5 stars great book!
Reviewed in the United States on November 22, 2020
This is an incredible followup to the first book and really expands on the aftermath of war and the world building of this sci fi world as well. The intertwining of history with fantasy was really mesmerizing and the fantasy elements served to enhance many relevant points the author makes about war and the aftermath of it on people who are left to pick up the pieces of devastation. Seeing the characters cross paths and have their narratives intertwine was also really interesting. I enjoyed the newer additions to the cast and was pleasantly surprised with how easily I took to them in one book. Wonderful followup!
Read more
Helpful
Report abuse
See all reviews