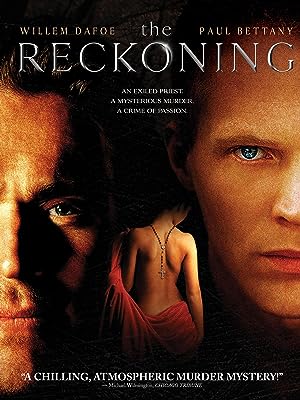 (180)
6.51 h 50 min2003R
An exiled takes up with a traveling band of actors, who then discover a murder has occurred and try to solve it by recreating the crime in a play.

Avid readerReviewed in the United States on October 28, 2018
4.0 out of 5 stars
Intriguing
Verified purchase
Set in 1380 England, or thereabouts, this movie captures the feel of the times like few other movies supposedly set at that time. The grime, the grittiness, the poverty of the people. The movie starts out with the delivery of a sermon. A very harsh one, stating that God wants the times on earth for people to suffer, so they will seek the afterlife. How depressing of a message. But he errs, and is forced to flee, and winds up with a group of players, who make their way to a small settlement/castle, just in time to hear the verdict of guilty to a woman accused of murder. She is to be hanged, and then drawn and quartered. No shortcuts there. The Priest has his suspicions about the verdict, and the remainder of the tale is unraveling the truth. And I feel it was done very well, with fine performances. And that unraveling of the real story is what makes this a good movie, as it is many layered.

A quarrel with the movie? The actors and townspeople had simply too good of teeth to be real for that time period. But I am aware of only one period film that took the care to get that detail right, and it is Master and Commander (2003) with Russell Crowe.

SpikeReviewed in the United States on February 17, 2019
5.0 out of 5 stars
A True Morality Play
Verified purchase
Fine direction meeting a strong script and acting give this tale of 14th Century Britain all of what it takes to meet the brilliance of Barry Unsworth's "Morality Play." The film, like the book, asks us two questions: First, where do we find God in the suffering of the innocent? The film does not pretend to answer, and perhaps neither should we. The second question we are asked to answer: Why do we infer nobility on the immoral exercise of power? In the 14th century warlords took the titles of king, prince, and barons.. Today we call them Presidents, Prime Ministers and CEOs, but while technology has changed, we still confer on those who wield violence titles of respect and grants of our obedience. Like any morality play, this film suggests an answer, if we dare to listen.
5 people found this helpful

Lisa SheaReviewed in the United States on May 26, 2014
4.0 out of 5 stars
Good View of Medieval Life with a Few Issues
Verified purchase
The Reckoning is a fairly unique movie. It's a medieval tale that explores the world of Passion Plays along with murder mysteries. You get interesting insight into how the feudal system worked, into justice in medieval times, and how actors were slowly changing the way performances were handled.

We have a number of famous actors here. Willem Dafoe, always one of my favorites. Paul Bettany. Vincent Cassel, who played the Night Fox in the Ocean's Eleven series. Matthew Macfadyen from Pride & Prejudice. Good stuff.

A group of actors comes into a remote castle village, merely by chance, and puts on some plays to earn some money. At this time, plays were seen only legitimate if they told stories from the Bible. It was considered inappropriate to tell "made up" stories. But Willem's character thinks that should change. He thinks that other stories can be just as important. And, as it turns out, this village has a story to tell. A young boy has been murdered.

There are investigations and intrigues, suspicions and suspects.

I love sword fighting, so I should mention that there really aren't any here. This is more of a "Name of the Rose" sleuthing story than a hack-and-bash story. That's quite fine, of course.

I also love stories that have both male and female characters in them, and it's a bit sad, but there are pretty much no females in this story. There's the woman accused of murder who has a brief part. There's also a female who is a member of the troupe, but she's actively dismissed and pushed aside. So that's a bit of a shame. Women in medieval times were fairly strong characters, and they had a lot of respect. When the men were away at the Crusades, women ran pretty much everything. They weren't quite treated as much as dirt as this movie makes it out to be.

The interiors of the castle scenes were played at Hedingham Castle, in Essex, England, but interestingly, the entire exterior is fake! These are actually the Rodalquilar gold mines in Almeira, Spain. The director converted the entire gold mine complex into a medieval village, including building a keep. You can see some photos of that by googling. Cool stuff.

I enjoy watching Willem Dafoe's amazing yoga skills in some of those scenes. No, that's not a stunt double. He really can do a standing backbend, a standing handstand, and many other feats at his mature age. It's inspirational.

If there's a down side to this movie, it's the ending. I don't want to give it away, of course, but the cutting and sequencing and camerawork are AWFUL during it. There are times people talk but their lips don't move. Other times they don't talk but their lips are moving. Very, very odd and rushed. It's a letdown after you get invested in what is going on.

Still, a good look at the evolution of Passion Plays, at some fairly good recreations of a medieval village, and a glimpse into how characters lived and loved during medieval times. Certainly a step above the movies that have characters in polyester tights :).

lily t.Reviewed in the United States on February 26, 2013
3.0 out of 5 stars
Unfortunately it strayed far from the book
Verified purchase
I loved Barry Unsworth's Morality Tale so much. It totally captivated me, and I have reread it many times. Within a small story, not of kings or rich men, but poor players at one of medieval England's darkest hours historically--the novel examines not only crime and the abuse of power but the opening of the medieval mind and the birth of a new art form. It's rare and wonderful to find a historical novelist creating an appealing work of fiction --one that is set within a certain time frame but doesn't detail every aspect of the period and transcends it with a universally appealing--well , morality tale--without once succumbing to melodrama.
In the book, the young priest was a witness to to the story--and the story itself was driven by the imagination of the lead player, Martin, and his love for the condemned woman--accused of a heinous crime.
Here, we needlessly get the noble (they literally elevated him to the nobility in this version) ninja priest driving the action, and a storyline focusing on the power aspects primarily, ending with a ridiculous showdown. I did enjoy the the way it was lit and shot, and the cast was fine given what they had to work with.
3 people found this helpful

ABCReviewed in the United States on April 13, 2015
5.0 out of 5 stars
As I am not a medieval historian
Verified purchase
and I haven't read the book from which this was adapted, I'm having to judge it on the basis of its success as an engaging film. I think it works--as few period pieces do--which is saying a lot, for the presence of Willem Dafoe is tough to get beyond. But I found the power of the story enough to make me overlook his unsuccessful accent. Paul Bettany's underplayed priest-in-ethical-agony is quite moving, and the supporting cast includes some fine British actors who give convincing performances. Vincent Cassel is well cast as the villainous overlord but has to deliver some unfortunately clichéd lines toward the end of the movie. Even so, the moral complications explored in this film provoke our sympathy and empathy, and the harsh injustices of feudalism, a familiar period-film trope, are made painfully real.
2 people found this helpful

Melissa RawskyReviewed in the United States on May 28, 2015
4.0 out of 5 stars
Pretty good, and worth the watch if you enjoy ...
Verified purchase
Pretty good, and worth the watch if you enjoy period films. Paul Bettany is great, as always. Interesting look at the times when actors were typically only allowed/expected to replay biblical stories, and how much the public yearns for truth ("news" these days), and that artistic reflection of what is wrong in society, or of an unfortunate or sad event, can be very cathartic for an audience who is having difficulty coping with and processing what has occurred...and also can provide clarity! Sort of a tangent to the jester, who would point out the king's follies, but by doing it humorously, he (usually) wouldn't be killed for doing so!

qajaqrReviewed in the United States on December 5, 2017
4.0 out of 5 stars
This film is ..
Verified purchase
... about doing the right thing in a world of things done wrong and how expensive that can be. It is about pointing a finger with a dirty hand and the crisis of conscience that brings. It is about faulty humans finding fault in other faulty humans. I liked it.
One person found this helpful

CidmonsterReviewed in the United States on July 25, 2015
4.0 out of 5 stars
Fun plot, great cast
Verified purchase
A campy medieval mystery thriller for those of us who really liked Romance of the Rose and that British TV series where the guy from I, Claudius played a sleuthing monk. And then you're like, "Wait, was that freaking Simon Pegg???" Yes it was, and yes that is William Dafoe, and yes that is the ever-lovely Tom Hardy lurking gorgeously in the background and playing sultry 14th-century drag, and by the way the leading man played Jarvis the computer on The Avengers. How did they all end up in a movie that got two stars on Rotten Tomatoes before most of them were famous? Beats the heck out of me, but hey, good times.
And Tom Hardy's audition video is a spectacle in and of itself. Someone saw something special in that there cartwheel.
https://www.youtube.com/watch?v=1Xxo5HfJDhk
One person found this helpful
See all reviews
Back to top
Get to Know Us
Make Money with Us
Amazon Payment Products
Let Us Help You
EnglishChoose a language for shopping. United StatesChoose a country/region for shopping.
© 1996-2022, Amazon.com, Inc. or its affiliates