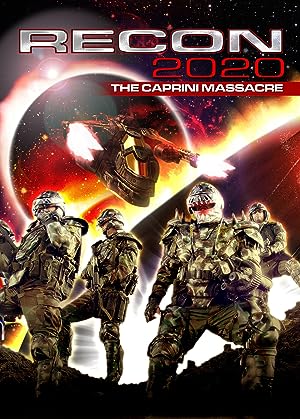 (47)
2.31 h 28 min200618+
After radioactive devastation destroys the Earth in 2020, the Galactic Marine Infantry is formed to protect the remaining human race, struggling for survival on a distant star.

Mike Rowe PortReviewed in the United States on June 7, 2017
2.0 out of 5 stars
The real victim of the Caprini Massacre is the viewer.
Verified purchase
Marines that look like National guard wannabies. Commands to "watch your six" immediately followed by "eyes front". Shuttle craft lands right in front of the objective but instead of immediately debarking, the Sgt spends a few minutes flirting with the pilot - and later says "Looks like we lost the element of surprise". The objective looks more like an empty derelict factory - complete with weeds and grafitti - than a research station/colony. If you don't care about acting, logic, or cohesion, then this movie is for you! I will say that the story line was good. I just wish they had the financial backing, writers, actors, and locations to bring it to life. Other than that, it was great!
3 people found this helpful

B. KimballReviewed in the United States on April 21, 2012
3.0 out of 5 stars
Not to be taken seriously...
Verified purchase
but fun to watch. Take it with a sense of humor. There is some profanity in it, but being military, it's fits in well with some funny moments. I gave it 3 stars because there are a lot worse movies out there, and with the limited budget they had, they did a fair job. Why do people get hung up on special effects? Just go with it.

It's an alien movie... without aliens.
A group of, well, 'space marines' drop down on a planet. No specific mission it seems, because they have very little intel. They scope out buildings looking to find out what is going on. Along the way they run into all sorts of bad guys and creatures... all packed into this one film. In the end of the movie they blow everything up and go home. There is very little technobable so you don't need to overtax your brain with this one. Just enjoy.

By CJs PirateReviewed in the United States on June 15, 2017
2.0 out of 5 stars
Lame
Verified purchase
Often I might explain, "What a waste of talent". Guess what? No so here. They didn't hire talent any more than they hired a scriptwriter, director or anything else.

There was​ only two reasons the first woman in the movie was there: left and right. Speaking of scripts, I'm betting this person was paid by the pun and cliche.
2 people found this helpful

John WestReviewed in the United States on May 30, 2011
4.0 out of 5 stars
A fun B movie
Verified purchase
I have really enjoyed the recon series. I found the lot of them entertaining, funny and over all a nice way to waste some time and relax. It's not a big budget hollywood film, frankly it's much better. It seemed to me that some folks wanted to make a scifi, as apparently so few do, with aliens, ocasional space ships, etc. They don't take themselves seriously and look to be having a great time. If you enjoy scifi, silly comedie and so on, I recomend this series.

J LewisReviewed in the United States on August 30, 2018
1.0 out of 5 stars
Don't believe the end card
Verified purchase
They say that they'll be back with a sequel.

NO...no, they won't. After seeing this, no one will pony up the money to pay production costs for this ever again.

Unless there is no merciful god in this universe. In that case we're screwed.

Bryan McKennaReviewed in the United States on August 17, 2017
2.0 out of 5 stars
Wait, wait, I got it... this is a fan-made battle report of the Nested Bike Helmet Chapter of the Marines Petulant
Verified purchase
Marines in space do have a certain cachet, you might be on to something there.... In the grim darkness of the far distant 3 years from now, there is only graffiti, yelling "move move", and muzzle flares added in post.

Bodega Bob (SS)Reviewed in the United States on May 20, 2017
3.0 out of 5 stars
Mwah!
Verified purchase
The film doesn't take itself too seriously. You shoudln't either! A fun watch if ya got nothing to do around 420 or so. The only thing missing here is a mime with an accordian and a chainsaw! Time well wasted!
One person found this helpful
See all reviews
Back to top
Get to Know Us
Make Money with Us
Amazon Payment Products
Let Us Help You
EnglishChoose a language for shopping. United StatesChoose a country/region for shopping.
© 1996-2022, Amazon.com, Inc. or its affiliates