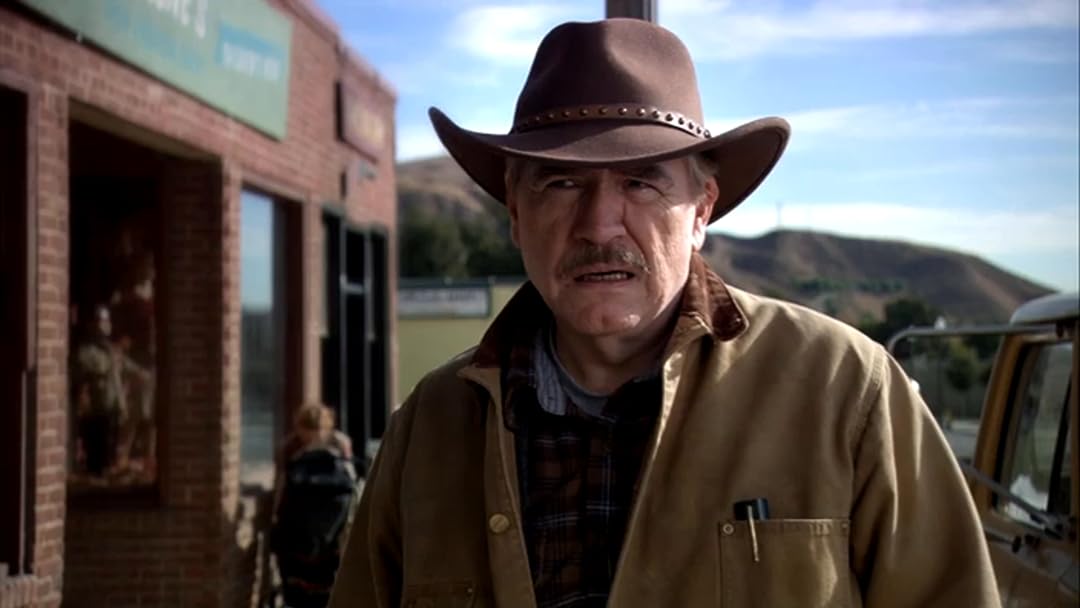 MichelleReviewed in the United States on February 19, 2021
5.0 out of 5 stars
Best Ketchum Adaption to Date.
Verified purchase
When Avery Ludlow's dog Red is callously murdered by three teens, he sets out for justice. Now, I have read all of Jack Ketchum's novels, but being the animal lover that I am, "Red" is one of my favorites, so I was apprehensive going into this. While the script does differ in some aspects, it still captures the feel of the book. I wasn't disappointed, like with some of the other adaptions. You couldn't ask for a better cast. Brian Cox is a veteran actor who always delivers. Tom Sizemore has never been better. Noel Fisher is the perfect sociopath, but anyone that has seen him on "Shameless" knows what a talent he is. Kyle Gallner is great as the only one with a sense of morality, although I would watch him in anything. I wish more people would find their way to this film.
2 people found this helpful

JoeC.Reviewed in the United States on June 27, 2021
3.0 out of 5 stars
Well written, but slow moving tale
Verified purchase
The story line was well enough, but this, for me, was slow moving and not something that reaches out to grab and hold one's attention. Not something I would ever consider watching again. Neither a heartwarming coming of age, nor a heartfelt and moving twilight of life enlightenment tome. This was more a tale of stubborn and single-minded "maturity" verse careless and youthful arrogance- and the inevitable clash between the two. Acting was nothing special. Definitely a 3-star result- average at best.
One person found this helpful

Richard Bellush, Jr.Reviewed in the United States on February 22, 2014
4.0 out of 5 stars
Old Dogs
Verified purchase
When I was young the country was full of older men with stern values but a willingness to give second chances – the sort who, if you played a prank, would make you work as punishment but then would pay you for what you did.

Men with this perspective are far rarer today, but some are still out there. In Red, one such older man named Avery, played by Brian Cox, has an old dog named Red. While he is fishing, three teens come upon him in the woods. They try to rob him, but he has nothing of value, so, in annoyance, a teen named Danny shoots Red. Avery finds out who the shooter is (from the local gunshop owner) and goes to meet the boy’s father. All he wants is for Danny to acknowledge what he did and to express remorse. Instead, Danny smugly denies everything and his father – a completely amoral wheeler-dealer who surely believes Avery but doesn’t care so long as he can’t prove it – throws Avery out. Another of the teens is Danny’s brother, who is remorseful but too scared of Danny and dad to cross them. The working-class parents of the third teen are just as unhelpful. Meantime, we learn of some terrible things in Avery’s recent past that explain much of his current behavior.

Since this movie is based on a Jack Ketchum novel, we know things will escalate into bloodshed. Avery persists in pressing the point. He never initiates violence but when threatened with it he doesn't retreat. It all culminates in an ending that is disturbing and satisfying – and disturbing that it is satisfying.

Paul A. KlingerReviewed in the United States on November 26, 2014
5.0 out of 5 stars
Great Film About Trying To Get Justice Rather Than Revenge
Verified purchase
One of the best indies of recent years, not to be confused with the Bruce Willis series of the same title. Brian Cox gives a superb
performance of an older man who, while fishing one day, is accosted by 3 spoiled brat teens who attempt to rob him, and when
discovering he has very little money, one of them shoots his dog and kills it. The film then is about Cox's attempts to get some
justice and satisfaction, not by getting even, but by getting to the bottom of it, finding out who the teens were, and having them
punished. But of course, today, parents tend to defend their offspring, no matter how despicable their acts were, denying that
they were capable of doing this and the accuser must be mistaken. It reminds me of parents who take their kids side in all school
disputes with teachers or administrators. As Cox's frustration grows, the situations gradually lead to tragedy, where no one is
really a winner. Excellent film will keep intelligent viewers engrossed from start to finish.
4 people found this helpful

Glinda GoodReviewed in the United States on June 13, 2011
4.0 out of 5 stars
Emotionally gripping, thoughtful movie
Verified purchase
Brian Cox does a fine job as Avery Ludlow, widower, shop keeper, owner of Red, a mature dog who was given to Avery as a puppy, a past gift from his deceased wife.

Soft spoken and non-confrontational, Avery is bullied by three boys while he is out fishing. When one of the little psychopaths, angry because Avery doesn't have anything of value to steal, shoots Red in the head, Avery begins a campaign to make the boys, then the boys' parents, take responsibility for the action.

Avery is driven by events in his own past, by the knowledge that when bad behavior by children is not addressed, terrible things can happen. There are no easy answers here, sometimes good parents can find themselves dealing with an inexplicably bad child. Sometimes bad parents can facilitate monsters. And in either case there is little help from society in preventing atrocity, or awarding justice to victims.

Thoughtful script, and solid work by the entire cast: Cox has so much depth; Sizemore and Fisher as father and son psychopaths deliver the highest creep factor; Robert Englund was marvelous as a shifty, out of work redneck.
3 people found this helpful

cjashleyReviewed in the United States on May 27, 2021
2.0 out of 5 stars
Not a great movie unfortunately
Verified purchase
Husband and I thought this would've been a pretty good movie. We barely got through it. It really wasn't good in our opinion. The story line is intense. But the way the movie goes just drags and drags.

americansniperReviewed in the United States on July 9, 2019
2.0 out of 5 stars
Barely watchable
Verified purchase
This movie can't decide if it wants to be a revenge flick, suspense thriller, or tear jerker. It ends up doing all three, poorly.
One person found this helpful

JynnReviewed in the United States on July 29, 2021
5.0 out of 5 stars
Good
Verified purchase
It was a little slow, but that just made the rage build up inside longer lol.
Great movie. The only movie I’ve seen the lead actor (who’s name I can’t remember at the moment) was in the Ringer. So to see him in a serious movie was great. Noel Fisher always playing a character you could hate with a passion which only make him a great actor.
See all reviews
Back to top
Get to Know Us
Make Money with Us
Amazon Payment Products
Let Us Help You
EnglishChoose a language for shopping. United StatesChoose a country/region for shopping.
© 1996-2021, Amazon.com, Inc. or its affiliates