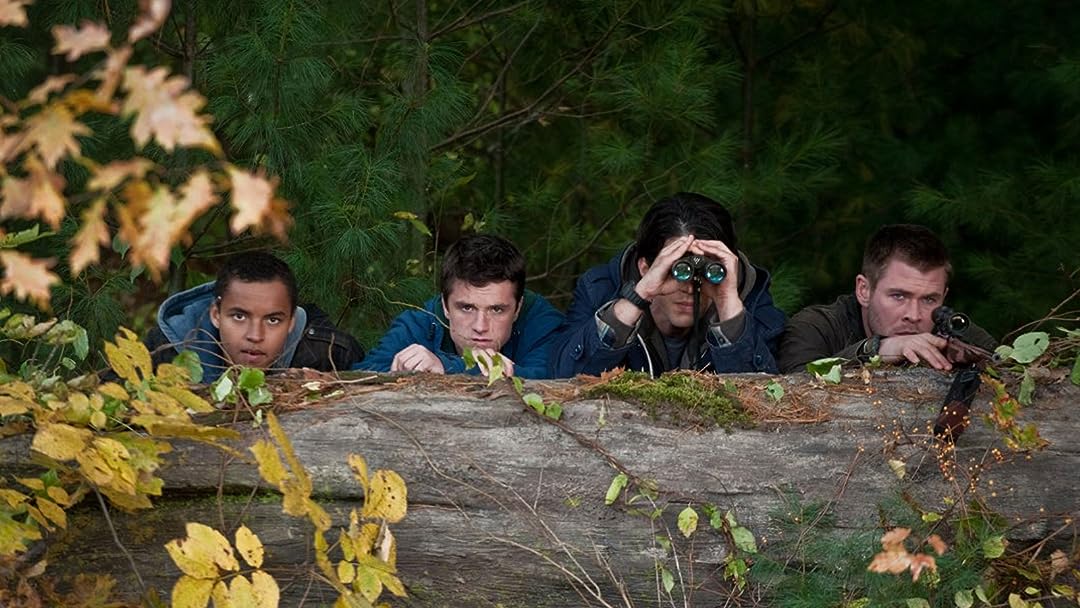 JReviewed in the United States on July 7, 2019
2.0 out of 5 stars
PC version of the original, much to the remakes loss
Verified purchase
I was expecting great things, it was funny how they stayed true to the original with many of the lines, but completely white washed over where the original writer pointed out how keeping records on gun owners was a bad idea, anti bill of rights hollywood is going to anti bill of rights I guess, also waaay too much CGI

From the original, left out of the [bad] remake:

KGB Major: "Do you want to see me?"
Colonel Bella: "Yes ... yes. Go to the sporting goods store. From the files obtain forms 4473. These will contain descriptions of weapons, and lists of private ownership.:

Info WarsReviewed in the United States on November 28, 2019
1.0 out of 5 stars
Its so bad it insults the Original Version
Verified purchase
Terrible move terribly made... Insults the original version staring Patrick Swayze. North Korea can't even make a fighter jet but we are expected to believe they can conquer the US? Yea right! Whoever wrote this was a moron. Save you money, buy or rent the original version. Its much better made with much better actors across the board. This version is garbage.
28 people found this helpful
Report abuse

Brian RReviewed in the United States on October 29, 2019
1.0 out of 5 stars
Just....trash.
Verified purchase
The original red dawn is cheesy but holy man, this movie was terrible. Its awesome in concept. The U.S. gets invaded by some baddies. And it goes from there with a ragtag band of dorks. That one kid though with the blonde girl friend ruined the whole movie. Everywhere he goes he screws his team over. Poor acting all around. Even worse story than the original. This movie was a cash grab mess. dont waste your time unless you just want to indulge the 'merica fantasy, I did and not ashamed to admit it. One star though, coulda done better.
20 people found this helpful
Report abuse

BKReviewed in the United States on May 31, 2021
1.0 out of 5 stars
Disappointing
Verified purchase
A real disappointing half-baked remake of the original.

The original Red Dawn was a far superior movie and made a campy but strong connection to the Cold War undercurrents at the time of its production, that still resonates today to students of history and over-the-top propaganda. You cared about the main characters and you felt you knew them by the end of the movie. The movie plot worked and it was well put together for a satisfying ending.

This movie really fails at all levels and that is so disappointing. IMHO, even if I didn't see the original, this movie would still be a jumbled mess and disappointment. It seems like the producers of this movie couldn't put it together and hashed together a rushed and contrived ending to put it out of its misery.

To those that haven't watched the original "Red Dawn" and found this movie as disappointing as I did, you need to see the original Red Dawn to erase this abomination our of your mind.

Kindle CustomerReviewed in the United States on May 7, 2018
4.0 out of 5 stars
Different than the original but not bad
Verified purchase
It was fairly well done from a somewhat different perspective than the original, different location, different invaders, a more urban environment, same character names but different life experiences -- the rebel leader was an active-duty Marine home on leave, for example, instead of a high school senior. I enjoyed it, though there are a few glitches in the storyline, things happening without explanation, some things happening with explanations that didn't make sense. I didn't feel it was a cohesive as the original, but it wasn't entirely falling apart, either. One problem I had was that the North Korean invaders were vicious, as they would be expected to be, but not very aggressive in their pursuit of the rebels. One scene had them hiding out in a forest ditch while the NOKO captain and a few soldiers stood nearby with a bullhorn having the rebel family members talk to them with the bullhorn. I found that unrealistic; if the NOKO captain thought the rebels were within range of the bullhorn he would have had a squad or two of troops establish a perimeter around them and close in. But the movie seemed to have a lot more action than the original, and the action was believable.
9 people found this helpful
Report abuse

StephanieReviewed in the United States on June 24, 2020
3.0 out of 5 stars
The original was so much better.
Verified purchase
I heard a lot of bad reviews on this movie, but this review is not one of them. As I did like the movie, even though it is a remake, and it is obvious that the over all story does put forth an effort to stick to the over all concept and story of the original movie. But it is also obvious that this is a retelling of the same story, which goes it's own way with the over all story. And I think that hurts it for everyone who saw the original Red Dawn that was released back in the 1980's. As I do have my problems with the movie, as someone who did see the Original Red Dawn back in the 1980's. Yet I also like the actors, and the job they did portraying the characters in the movie. I also like that it is told differently, in an attempt to retell an old story and think the director did a fine job with the over all movie. But it will never be the "RED DAWN". But it is a good movie for an updated version of the Original movie.
6 people found this helpful
Report abuse

Leslie BenkerReviewed in the United States on July 9, 2019
5.0 out of 5 stars
AWESOME MOVIE
Verified purchase
I have always said that I like the orignal movies best. But after watching this remake I have changed my mind. This movie makes the orignal down right boring. This has a lot of action and will jerk at your heart strings at time. But it is a movie well worth watching. I rented it but after watching it just once I bought in right away. This is the kind of movie that I can watch several times a week. It is that good. Highly recommend it
6 people found this helpful
Report abuse

Looking CloserReviewed in the United States on June 3, 2021
1.0 out of 5 stars
Almost a real war film
Verified purchase
The varsity football team, prom queens, and their friends save the nation from a North Korean Army invasion. So stupid it was entertaining, if for its head-slapping dumbness. Hard-boiled, battle-hardened crew of ex-high-schoolers have learned the ropes from an Iraq War veteran. Within a short time he turns them into a fighting unit of men and women who then become the strategic focus of the Korean Army,. if they're ever to conquer the U.S., whose army, navy, air force, and marines have disappeared for some reason, allowing hundreds of enemy paratroopers to drop over the Cleaver's neighborhood. God know what happened the Beave!
3 people found this helpful
Report abuse
See all reviews
Back to top
Get to Know Us
Make Money with Us
Amazon Payment Products
Let Us Help You
EnglishChoose a language for shopping. United StatesChoose a country/region for shopping.
© 1996-2021, Amazon.com, Inc. or its affiliates